Bing Neel Syndrome: Real Life Data and A Review of the Literature

Bing-Neel syndrome is a rare complication of Waldenström’s macroglobulinemia defined by the infiltration of malignant lymphoplasmacytic cells into the central nervous system. We present the results of a retrospective study aimed at describing real life data of 12 patients with Bing-Neel syndrome. Our findings are compared with data in the literature. Our study provides additional insights on the characteristics and outcomes of patients with the Bing-Neel syndrome.

Waldenström’s macroglobulinemia (WM) is classified as a lymphoplasmacytic lymphoma (LPL) in the World Health Organization (WHO) Classification. WM is characterized by an IgM M-component and infiltration of the malignant cells into the bone marrow, lymphatic tissue, and in rare cases, also into the central nervous system (CNS). The Bing-Neel syndrome (BNS) is defined by infiltration of LPL cells into the CNS either as parenchymal lesions or a diffuse leptomeningeal infiltration. BNS was reported in 1936 some years before the first publication on WM [1]. The prevalence of BNS in WM patients has been estimated to be less than 1% [2]. BNS has only been reported in case series or single case reports comprising between 100 and 200 patients. An international guideline for management of BNS was published in 2017 by a group of experts in WM [3]. We report retrospective data of 12 patients with verified BNS in order to expand the knowledge of clinical symptoms, diagnostic findings and outcomes.

Patients diagnosed with WM between 2010 and 2020 were retrospectively analyzed in this observational study based on patients diagnosed at two specialized hematological centers. The diagnosis of WM was defined as bone marrow infiltration by malignant cells with an immunophenotypic LPL profile according to the 2008 WHO Classification as well as the detection of an IgM M-component. One patient had a monoclonal IgM gammopathy of undetermined significance (MGUS) without evidence of bone marrow infiltration with LPL. Patients were included if they demonstrated either monoclonal LPL cells in the cerebrospinal fluid (CSF) or a biopsy proven CNS involvement with LPL. In all WM patients, clonal B-cells in the CSF or brain biopsy had identical immunophenotypic profile as LPL cells diagnosed in the bone marrow. Patients with evidence of transformation and aggressive B-cell lymphoma were excluded. Our data are presented in Table 1. In most patients (83%), BNS was diagnosed in the absence of signs suggesting systemic progression of the underlying WM. Interestingly, one patient had a MGUS without evidence of WM. In two patients (17%), BNS was the first manifestation of WM. All patients were evaluated by examination of CSF and the BNS diagnosis was confirmed by flow cytometry in all patients except one. In the latter case, the diagnosis relied on histopathology of a CNS biopsy. Biopsies of cerebral parenchymal lesions were performed in three additional patients. In these cases, however, malignant cells were also detectable in the CSF. In four cases, CSF was further examined using quantitative polymerase chain reaction (qPCR) to determine MYD88 L265P mutational status and was found positive in all four cases. MRI was performed in 83% (10/12) of the patients. 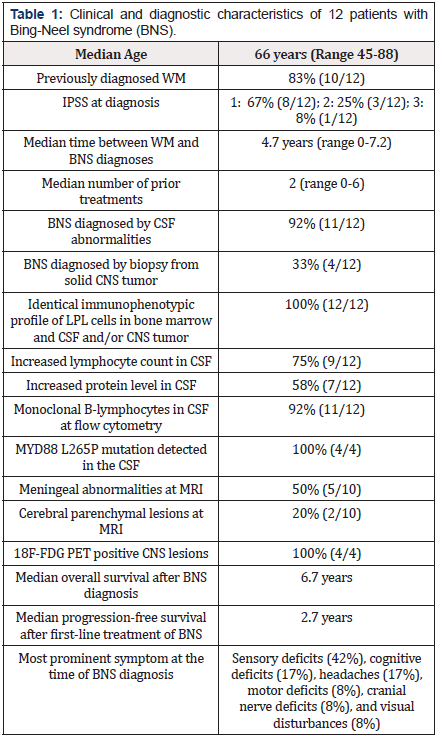 Brain parenchymal involvement was present in 20% (2/10) of these patients with the majority presenting as subcortical lesions while leptomeningeal involvement was detected in 50% (5/10). In 30% (3/10) of patients investigated by MRI, no imaging abnormalities were detected. In five (42%) patients, the CNSdirected therapy was high-dose methotrexate. Eigth (67%) received intrathecal chemotherapy with methotrexate. Four (33%) received treatment with bendamustine. Rituximab was given intravenously in nine (75%) patients and by intrathecal administration in one (8%) patient. Interestingly, the latter patient went into complete remission without other treatments and remained in remission until follow-up. No patients received autologous stemcell transplantation. One (8%) patient was consolidated with whole-brain radiation in addition to high-dose methotrexate. Two (17%) patients had progressive disease during the course of CNSdirected treatment. Both of these patients were only treated with intrathecal chemotherapy due to poor performance status and a heavily pre-treated WM. All other patients (10/12) achieved a complete (5/10) or partial (5/10) remission. All patients with highdose methotrexate included in their treatment had a post-therapy complete remission of the BNS.

Several BNS case reports have been published identifying more than 100 patients with BNS [4-11]. Recently, two larger retrospective surveys have contributed considerably to the clinical knowledge of this intriguing disease [12,13]. In BNS, clinical manifestations are a consequence of LPL cells invading the CNS. The clonal B-cells are detected by examinations of the CSF, or by imaging of the CNS. BNS is a rare complication of WM but is suspected in patients with WM who present with neurological manifestations. The presentation of BNS may be very diverse. Headache, nausea and vomiting, visual or hearing disturbances, and neuropathies of the cranial nerves, typically appear in patients with meningeal involvement. If the patient presents with seizures, cognitive and psychiatric symptoms, cerebellar dysfunction, or paresis, parenchymal lesions are suspected. A recent retrospective study of 28 patients with BNS found that the most common symptoms included motor deficits (46%), cognitive deficits (39%), sensory deficits (39%), headaches (21%), ataxia (18%), cranial nerve deficits (18%), and seizures (18%) [14]. The time between initial symptoms and diagnosis of BNS has been reported to be more than one year in some patients with a median diagnostic delay of 4 months [12].

Time from WM Diagnosis to Onset of BNS

In other case series, BNS is usually related to relapsing WM, though a concomitant BNS may also be diagnosed at the time of primary diagnosis of WM or even in patients without a concomitant WM [9,15]. The majority of our patients had no correlation between BNS and systemic progression of WM. Median time to appearance of BNS after primary WM diagnosis has been reported as 3 to 6 years [2,13]. In these case series, however, some patients presented as an very early event at the time of primary WM diagnosis while other patients had WM in more than one decade before the onset of BNS [2,13]. In our cases, 17% (2/12) of the patients had BNS diagnosed without a prior diagnosis of WM.

A comprehensive guideline for BNS has recently been published [3]. Diagnosis of BNS is based on a biopsy of a cerebral lesion and/ or examination of the CSF demonstrating a LPL with evidence of plasma cell differentiation. The malignant B-cells express pan B-cell antigens such as CD19, CD20 and CD79a, and in the majority of cases, also CD27 and CD52 [3]. An IgM M-component detected by electrophoresis in the CSF also indicates the presence of WM but may also reflect an increased permeability of the blood-brain barrier. Using a highly sensitive real time qPCR technique, it has been demonstrated that the MYD88 mutation can be detected in the CSF of BNS patients [14,17]. In our study MYD88 mutation was found in all four patients examined. Although not specific for BNS, detection of mutations in the MYD88 and CXCR4 genes in CSF specimens is suggestive of CNS involvement [3]. In other reports and in some of our cases, repeated CSF examinations were necessary before the malignant cells could be identified [12]. MRI abnormalities are demonstrated in the majority of patients but a normal MRI does not exclude the diagnosis of BNS [12,13]. The MRI findings are either diffuse (leptomeningeal) or tumoral (parenchymal). The parenchymal lesions can be either uni- or multifocal. A biopsy or CSF sample positive for malignant cells with WM phenotype is mandatory for the diagnosis of BNS. In a large retrospective multicenter study, the most common MRI finding was leptomeningeal infiltration with a prevalence of 70% while 42% of the patients had parenchymal lesions [18]. Our data confirm a similar distribution of leptomeningeal versus parenchymal disease. In our series, 30% of patients were without abnormal radiological findings. Using 18F-FDG PET/CT imaging may improve the evaluation of BNS [19]. In four of our patients, an 18F-FDG PET/CT was performed, and in all these patients pathological PET positive parenchymal or leptomeningeal lesions were demonstrated.

The therapy for BNS has been limited to cytotoxic agents that exhibit good CNS penetration, such as methotrexate and cytarabine [3]. The treatments observed in our retrospective study were based on local physicians’ choice and precludes definite conclusions regarding the best treatment strategy. The same reservations apply to other available data. Treatment is only recommended in symptomatic patients [3]. In recent retrospective surveys, the overall response rates to first line therapy were up to 70%, and no differences according to type of treatment were demonstrated [12,13]. Whether treatment directed at the systemic WM component also influences the outcome of the BNS is not clarified. The impact of high-dose chemotherapy and autologous stem cell transplantation on survival has never been evaluated in a clinical study but case reports suggest that most patients do not benefit from intensive chemotherapy [12]. However, autologous stem cell transplantation may be an option in fit and carefully selected patients [20]. Several previous reports have suggested purine analogs as treatment option for BNS [21,22]. The efficacy of rituximab needs clarification. In our series, one patient received intrathecal rituximab as monotherapy and achieved clearance of malignant cells in the CSF. In our experience and consistent with other data, treatment with combined rituximab, bendamustine and intrathecal methotrexate is well tolerated and effective, representing a suitable treatment option for BNS patients [23]. Radiotherapy is only recommended in selected cases due to toxicity [3]. Ibrutinib has demonstrated high response rates in WM [24]. Recent data also suggest a therapeutic role in BNS [25,26]. In a retrospective multicenter study, BNS patients were treated with ibrutinib including 39% as first line therapy [14]. The study demonstrated high response rates with an improvement of BNS symptoms in 80% of the patients, resolution of imaging findings in 83%, and a clearance of the CSF in 47%. The 2-year event free survival rate with ibrutinib was 80% and the 5-year overall survival rate was 86% [14].

Most case-reports are limited by a short follow-up period and the prognosis of BNS needs further clarification. The long-term outcome of WM with BNS seems favorable in our series. A survival rate of 59% at 10 years was reported in a retrospective cohort [12]. In our experience, long-term survival for more than 10 years after successful treatment occurs in some cases. The onset of BNS did not appear to be associated with a more aggressive clinical course of WM. Patients with de novo BNS seem to have a better prognosis compared to those with a previous history of WM [13]. The clinical nature of BNS seems less aggressive when compared to CNS involvement of other malignant lymphoproliferative disorders. BNS may even present as asymptomatic disease [3]. However, the majority of deaths occur within two years of diagnosis suggesting different clinical and biological phenotypes [13].

In summary, BNS is a rare and probably under-recognized condition that should be considered early in the context of unexplained neurological symptoms in patients with WM. It may occur in patients with indolent and stable WM. The course of BNS is highly variable but in general, it carries a good prognosis with an indolent course and many long-term survivors. A major challenge is to expand our knowledge of treatment strategies. Treatment with ibrutinib seems promising and the efficacy of ibrutinib in BNS should be investigated further in prospective clinical trials.