Stroke kills more patients globally than any other disease outside of ischemic heart disease, with prompt systemic thrombolysis being the standard of care for the majority of strokes (acute ischemic stroke [AIS]) [1]. Its benefit over risk ratio is so notable that recent randomized trials were conducted to determine if the treatment window could be extended. Yet, there is a concern for embolic complications for patients who receive tissue plasminogen activator (tPA) in the setting of cardiac thrombi [2], with an estimated nearly 500,000 stroke patients annually with cardiac thrombus who may be at risk for such post-tPA complications [3,4]. But there are no adequately powered (let alone randomized) studies assessing post-thrombolysis embolization in patients with cardiac thrombus and AIS [5]. Our study is the first known to apply state-of-the-art machine learning augmentation of causal inference propensity score analysis (backed by Bayesian statistics to simulate a trial of 100,000 subjects) to evaluate if thrombolysis increases microembolic events (MEs) among cardiac thrombus patients with AIS.

This retrospective cohort study assessed post-tPA ME as the primary outcome and length of stay (LOS) in days and poor functional outcome at discharge (>2 modified Rankin score) as secondary outcomes. Inclusion criteria were cardioembolic AIS patients presenting sequentially at a single quaternary academic medical center in Houston, Texas, USA, from 01/01/2012- 02/31/2017, with exclusion criteria being no recorded presence or absence of ME and cardiac thrombus.

A. Propensity score adjusted penalized multivariable logistic regression was performed (adjusting for age, admission NIHSS, and the likelihood of receiving tPA [additional variables were excluded based upon the below regression diagnostics]) including the interaction term of tPA and cardiac thrombus as a model variable. Stratification by tPA was conducted with margins probabilities to calculate average adjusted predictions. The final models were optimized for performance based on standard regression diagnostic tests in addition to comparison to a machine learning-based backward propagation neural network.

B. Augmented inverse propensity weighted (AIPW) analysis was then conducted with the same model parameters as [1] to compare the results to [1]. 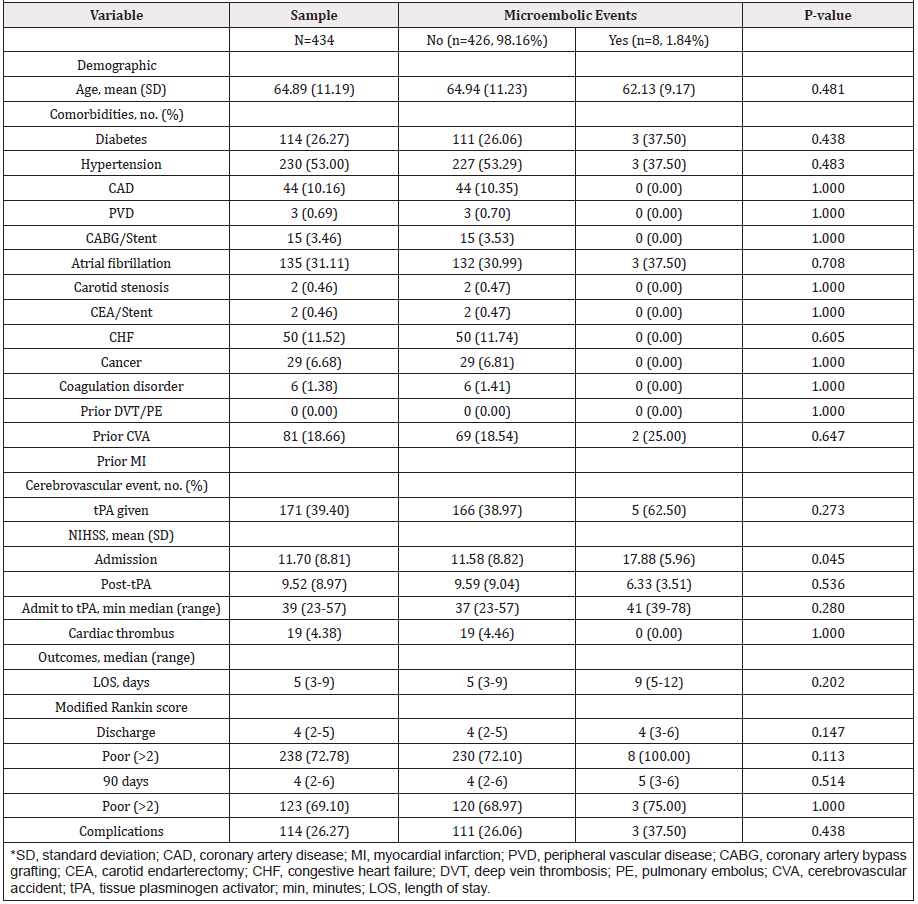 This is the largest known study of post-thrombolysis ME and cardiac thrombus among AIS subjects, and the first to use robust causal inference statistics supported by machine learning and Bayesian statistics. Our analysis suggests that cardiac thrombus does not increase post-thrombolysis ME in AIS, a finding supported by a Bayesian analysis modelling 100,000 patients. Our study does have limitations including a non-randomized design using a single center dataset with a rare primary outcome. Although large randomized controlled trials are needed to confirm these findings, it is unlikely that such trials will occur (given the expected enrollment challenges), leaving this study as a potentially helpful addition to the existing literature to guide clinicians in such a challenging scenario.