Cefpodoxime is utilized to care for infections reasoned by bacteria, containing respiratory infections, skin infections in addition to urinary tract infection. The principal purpose of present follow a line of investigation was to explore in vitro communications of Cefpodoxime with crucial metal salt furthermore antacid to settle on the bioavailability in view of antimicrobial movement of Cefpodoxime following drug metal communications at the pH 7.4. Cefpodoxime is one of the cephalosporin drugs so as to is exercised to treat numerous different sorts of infections originated by bacteria. Since the existence of compelling the ligand may influence bioavailability of metal in blood and tissues, for that reason with the intention of study the handy interaction of the Cefpodoxime with vital elements in attendance in the body. Cefpodoxime has been related with Zn, Mg as an in vitro examination. Besides, the anti-microbial movement of drug along with the complexes was resolved. It has scrutinized that Cefpodoxime interrelates with metal and antacid on the pH 7.4 by plotting various uv spectrophotometric methods (Tables 1&2). This examine authenticates that there was the interaction between Cefpodoxime and metal, antacid which was authenticated by job’s plot technique furthermore by antimicrobial exploration. This was authenticated that region of inhibition of Cefpodoxime with Metal in addition to antacid condensed from 16mm to 12mm and 13mm correspondingly. The typical Cefpodoxime disk also checked in opposition to Staphylococcus aureus.

Cefpodoxime is an orally rapt, wide spectrum and thirdgeneration of cephalosporin occupied in management of respiratory tract in addition to urinary infections. At the same time as cefpodoxime is a prodrug which is hydrolyzed to this active metabolite and also cefpodoxime is considered to progress the permeability in addition to bioavailability of the close relative molecule of cefpodoxime acid. Now drug interaction be capable of simply be distincted as interaction connecting a drug in addition to other substance with the intention of prevents drug commencing the stage as predictable. These connections may happen due to be short of knowledge regarding the main ingredients implicated in the related substances [1]. Two medicines are antagonistic at what time their interaction occurs a reduce in special effects of one or else both of medicines [2,3]. The dissimilar responses of receptor to act of a medicine has effected in number of arrangements, which use expressions such as “partial agonist”, “competitive agonist” etc. This is even expected that a lot of authors would mismanage any given arrangement [4]. Commonly iron complexes were used in convey of oxygen in human blood as well as tissues [5]. An mature at rest takes 250ml of uncontaminated oxygen for each minute, these oxygen conceded by metal complex convey system recognized heame, alloying oxygen to go away the blood at what time it arrives the tissue [6]. Cefpodoxime is a verbal, thirdgeneration of cephalosporin antibiotic [7]. It is usually used to care for acute otitis media, ear infections, pharyngitis, in addition to gonorrhea [8]. It is also used as oral persistence therapy when cephalosporin is no longer essential for treatment [9]. Cefpodoxime is one kind of prescription medicine used to care for variety of the bacterial infections [10]. Cefpodoxime is recognized cephalosporin antibiotic [11]. Cefpodoxime works by ending the enlargement of bacteria [12]. Cefpodoxime care for only the bacterial infections. This will not effective for the viral infections. Preventable use and misuse of whichever antibiotic can direct to its reduced effectiveness [13]. 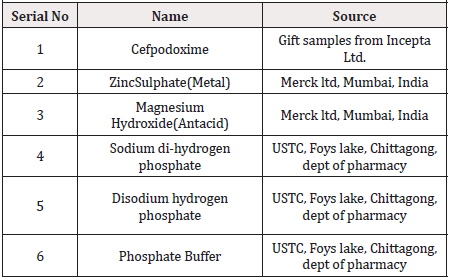 For the grounding of 0.01 Molar metal solution like zinc sulfate hepta hydrate (exactly 0.28754gm) was evaluated exactly in addition to initiated with the assist of the funnel in a 100ml volumetric flask, softened in DM water in addition to framework to the mark by the similar solvent. These prime solutions were additional diluted ten creases in the equivalent solvent along with the concluding solutions were 0.0001M concentration.

For the preparation of 0.01M antacid solution, Mg(OH)2 (0.0740gm) was evaluated accurately in addition to initiated with the facilitate of funnel in 100 milliliter volumetric flask, softened in the demineralized water furthermore construct up to mark by the equal solvent. These primary solutions were further diluted ten folds in the same solvent and the final solutions were 0.0001M concentration.

Grounding of the Buffer Solutions

Grounding of the Typical Curve of the Cefpodoxime

Solution of celebrated concentration (3μg/ml) of trial samples are completed through dissolving measured quantity of the trials in calculated amount of solvents. Dried in addition to sterilized filter term paper discs (6 mm as a diameter) are subsequently impregnated with recognized amounts of trial substances by using micropipette [9]. Discs holding the test substances are positioned on the nutrient agar media homogeneously seeded by the test organism, typical antibiotic discs along with blank discs were utilized as positive furthermore negative control. These plates now are kept at the low temperature like 40C for the 24 hours to permit maximum diffusion. Throughout this time desiccated discs suck up water from surrounding medium furthermore the trial materials dissolve along with spread out of the trial disc. The diffusion happens according to physical law so as to controls diffusion of the molecules during agar gel. Consequently there was a gradual alter of trial substances concentrations in medium adjoining the disc [14]. 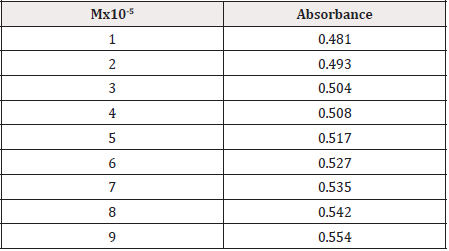 From the subsequent (Tables 3&4), this can monitor to the absorbance of the Cefpodoxime enhances with the enhancing concentration in keeping with Beer Lambert’s equation. From the Table 5, it can observe that the absorbance of Cefpodoxime is different when it interacts with Mg(OH)2. From the Table 6, it can observe that interaction between drug and metal may lead to form complexes which have different light absorption capacity and spectrum pattern is altered (Table 7). So any alteration and spectrum behavior is regarded as a tool for primary interaction from the spectral studies.

Table 7: Values of job’s plot of Cefpodoxime with ZnSO4.7H2O.

The molar proportions of complexes of the Cefpodoxime by metal salt were calculated approximately through Jobs method. The examined absorbance rates were calculated in the pH 7.4 at diverse concentration like 1x10-5 to 9x10-5 Molar of Cefpodoxime by metal salt. Then Job’s plots at the pH were acquired through plotting absorbance variation against mole portion of drug. From the above we can observe that Cefpodoxime forms strong 1:1 complexes with zinc sulfate hepta hydrate which is indicated as inverted ‘V’ shaped curve.

From the above we can observe that Cefpodoxime forms strong 1:1 complexes with Mg(OH)2 which is indicated as inverted ‘v’ shaped curve (Table 8).

Table 8: Values of Job plot of Cefpodoxime and Mg(OH)2.

The antimicrobial effectiveness of the trial agents is calculated by their action to avoid the enlargement of microorganisms neighboring discs which provides clear precinct of inhibition. Later than incubation, the antimicrobial actions of the trial materials were concluded through measuring diameter of zones of the inhibition inside millimeter through a crystal clear mm scale (Table 9). The trial samples were examined in opposition to Staphyloccopcus aureus. The typical Cefpodoxime disk also checked in opposition to Staphyloccopcus aureus. The consequences of the antimicrobial action, calculated in view of diameter of the zone of the inhibition in the mm were demonstrated in Table 10. Antimicrobial sensitivity testing of Cefpodoxime against Staphylococcus aureus after interacting with ZnSO4.7H2O and Mg(OH)2 solution respectively. Now it was proved that zone of the inhibition of the Cefpodoxime through Metal and antacid Zn, Mg reduced from 16 mm to 12mm & 13mm correspondingly due to the metal, antacid and drug interaction.

Table 10: Diameter of zone of inhibition.

Though, there were some limitations in this research work like proper financial support from any side, active pure drug collection was not easy in Bangladesh. Eventually it has been overcome. The sophisticated spectrophotometric technique is easy, straight as well as worthwhile for the fortitude of drug. Commencing this spectral reading, this has been observed that Cefpodoxime provides a spiky peak at the 422nm. At what time Zinc Sulfate furthermore antacid solution, Mg(OH)2 combined with Cefpodoxime 1:1 ratio and the strength of peak alters extremely and absorption features are changed due to the interaction although the position of complex do not change. Then antimicrobial viewing of an mediator is crucial to find out its spectrum in opposition to various natures of the pathogenic microorganisms. The Job’s plot have provided the molar percentage of the complexes of Cefpodoxime through Zinc Sulfate in addition to antacid solution like Mg(OH)2. At the pH 7.4 Cefpodoxime structures tough 1:1 complexes through Zinc Sulfate in addition to antacid solution like Mg(OH)2 designated as ‘^’ natured curves. These curves can indicate well-built kinetics of the complexation between Cefpodoxime by Zinc Sulfate along with antacid solution like magnesium hydroxide. The trial samples were checked in opposition to Staphylococcus aureus. The typical Cefpodoxime disk also checked in opposition to Staphylococcus aureus. It was examined that antimicrobial action of the Cefpodoxime reduces when it structures complexes through ZnSO4.7H2O in addition to antacid solution like magnesium hydroxide. Thus, through antimicrobial examination it was proved that zone of the inhibition of the Cefpodoxime through Metal and antacid Zn, Mg reduced from 16 mm to 12mm & 13mm correspondingly.