Whenever in-vitro experiments precede the in-vivo studies of a new drug, an effort is being made to transform the generated data into parameters (mainly dosing regimen) that can optimize the in-life stage and reduce the number of animals that might be required. The present manuscript suggests a method for such a transformation, using general pharmacokinetic principles and, if required, assisted by data from the literature.

Preclinical studies of new compounds are often preceded by in-vitro experiments, aiming at preliminary examination of the proposed new drug, as well as generating vital data for optimal design of the in-vivo studies, with no affliction to living animals. However, the translation of the in-vitro data to in-life parameters is often obscure and confusing.

The in-vitro study is primarily designed in order to evaluate the safety and efficacy of the Test Item on a representative cell line.

An in-vitro test for evaluating the cytotoxic effect of a Test Item usually starts by calibrating of the optimal number of cells required for the assay. The cells are plated on a 96 well plate, in their culture medium, at a wide range of concentrations in triplicates. The cells are allowed to attach for 24 hours, at 37⁰C in 5% CO2. Thereafter, the culture medium is discarded, assay medium is added, and the cells are incubated for additional 48 hours, at 37⁰C in 5% CO2. Finally, the assay medium is discarded again, and a fresh culture medium is added to the cells, along with 50μl of XTT reagent for determining the cells viability. The cells are incubated according to the Kit’s instructions, at 37⁰C in 5% CO2. The plates are shaken to evenly distribute the dye in the wells and the absorbance of the samples is measured with a spectrophotometer (ELISA reader) at a wavelength of 450 nm. In order to correct for non-specific readings, measurements at wavelength of 620 nm were subtracted from the 450 nm readings.

An example for Results

The highest cells’ concentration within the linear curve (7,500 in the example demonstrated blow; (Figure 1)) is chosen for estimating the Test Item cytotoxicity. 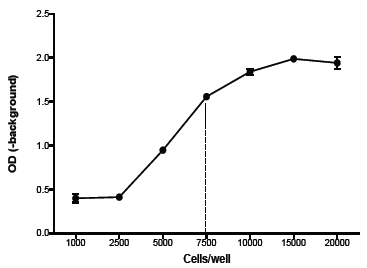 The procedure is quite similar: Following attachment of the cells for 24 hours, a new assay medium is added with various concentrations of the Test Item and vehicle control. The incubation is carried out for 48 hours, as is the usually accepted procedure period in this XTT assay. The assay medium is discarded, and a fresh culture medium is added to the cells, along with 50μl of XTT reagent. After allowing the XTT color to develop, the absorbance is monitored as a measure for the cells’ viability (Figure 2). 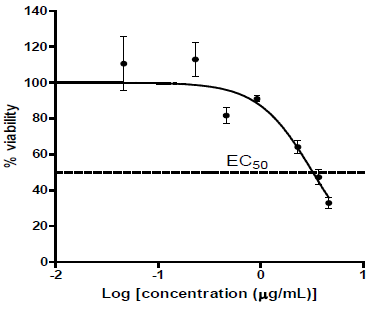 From the Figure 2 the value of EC50 is determined-the concentration that kills 50% of the cells during 48 hours of incubation. This value is being transformed to in-vivo doses as explained below, considering the assumption that 5x EC50 might kill around 97% of the cells.

The two main pharmacokinetic parameters with physiological significance are-the drug’s clearance (usually marked as CL and given in units of volume/time) and the drug’s volume of distribution (Vd-given in units of volume for the investigated specie (could also be given as volume per average weight of the given specie in kg). The terminal half-life parameter, often used by clinicians, is a derived parameter from these two, calculated for IV administration as T1/2= ln2xVd/CL (for other routes of administration the bioavailability factor should be added). The concentration of the drug immediately following IV administration can be calculated by dividing the administered dose by the volume of distribution (C0=Dose/Vd), thus the volume of distribution Vd can determine the dose required to obtain a desired initial plasma concentration (C0) that will match the in-vitro concentration data. Through fast equilibrium it can be assumed that the calculated initial concentration will also be the initial concentration that gets in contact with the tissues. Later on, biodistribution, metabolism and elimination diminish the drug concentration with time. Therefore, for prolonged treatments, repeated dosing regimen should be adapted, to replenish the drug and continue to get its desired effects. Two additional equations for which CL and Vd are being used in preclinical studies regarding the required drug concentration for achieving a therapeutic effect (CR) are: calculation of the loading dose, estimated by the equation CRx- Vd and calculation of the dosing rate, estimated by CRXCL. Whenever new drugs are involved, with no pharmacokinetic data available, the dose estimates need to rely on the in-vitro data and on data for similar compounds from the literature.

It is recommended to collect pharmacokinetic data for the new compound before transforming the in-vitro data to the in-vivo scenario. In cases in which these are lacking, a literature survey may be conducted for similar compounds. Special attention should be given to matching the lipophilicity/hydrophilicity of the drugs as well as the route of administration (ROA). Sometimes such data is available for humans only. Whenever the literature indicates a clearance rate in humans (e.g. in L/hr,kg), the acceptable correlation to rodents should be introduced [1], partly due to faster metabolism and partly due to enhanced clearance in smaller animals. According to the above equations, the dose that should be applied is calculated by VdxC0, in which Vd is the calculated or assumed volume of distribution of the Test Item for the tested specie and ROA, and C0 is the effective concentration determined at the in vitro experiments (e.g. a number of EC50 values).

The main objective of the manuscript was to demonstrate a set of considerations, based on general pharmacokinetic principles, for transforming in-vitro data to workable in-vivo parameters. The volume of distribution of the new drug for the tested specie and ROA is the key pharmacokinetic parameter for this transformation, and should be multiplied by the effective concentration, determined at the in vitro experiments.