Diabetes mellitus is becoming the third ‘killer’ of mankind, after cancer, cardiovascular and cerebrovascular diseases, because of its high prevalence, morbidity and mortality. The antihyperglycaemic activity of the leaf of Massularia acuminata that is used ethno medicinally in Nigeria in the management of diabetes mellitus was investigated is this study to justify its antidiabetic folkloric claim. Ethanol leaf extract of the plant at 100,200 and 400mg/kg was investigated for its antihyperglycaemic effect in glucose-induced hyperglycaemic rats using glibenclamide (5mg/kg) and 1% Tween 80 in normal saline as positive and negative controls, respectively. Anti-hyperglycaemic activity-directed purification of the ethanol leaf extract of the plant in glucose-loaded rats, led to the isolation and characterisation of acuminatoside by comparing its spectral data with those in the literature.

The results showed that the median lethal dose, LD50 of the ethanol leaf extract of M. acuminata was greater than 5000mg/kg while its 400mg/ kg was the most active dose with comparable activity (p>0.05) to the standard drug. The ethylacetate partition fraction was the most active fraction among the fractions from which acuminatoside was isolated. The isolate at 10mg/kg elicited a comparable (p>0.05) activity to glibenclamide (5mg/ kg) and was significantly more active than the 20mg/kg dose. The results of this study justified the folkloric antidiabetic use of Massularia acuminata leaf and showed acuminatoside as one of its antihyperglycaemic constituents.

Humans have continually depended on plants for their basic needs including food, clothing, shelter and medicine for ages [1] . Many drugs of importance of today such as, digoxin, tubocurarine, vincristine, vinblastine, reserpine, artemisinin, etc were obtained from plants [2] and the use of these drugs in orthodox medicine is related to their use in ethnomedicine [3] . Plants represent a largely untapped reservoir of molecules with diverse chemical structures and a unique source of potentially new drug leads [4-6]. Massularia acuminata commonly called “Pako Ijebu” in South Western Nige riais known to be widespread from Guinea to Western Cameroun and extending into Congo [7,8]. The plant has been implicated in Nigerian ethnomedicine for the management of mouth infections, rheumatism, pain, cancer and diabetes [9,10].

Male and female healthy Wistar albino rats with the average weight of 170g were used for the experiments. They were bred under standard conditions (temp. 27±3°C, relative humidity 65%, natural 12h day-night) and housed in different cages in the animal house, Department of Pharmacology, Faculty of Pharmacy, O.A.U., Ile-Ife, Nigeria. They were acclimatized for at least 5 days before commencement of the experiments and fed on a standard pellet diet (Bendel Feeds, Benin, Nigeria). The rats had access to water freely throughout the experiment. They were divided into groups of five rats each and fasted for 24h before administration of either glucose, extract, fractions, isolate, drugs or vehicle [17,18]. The Guide for the Care and Use of Laboratory Animals published by the National Academies Press [19] was strictly adhered to in carrying out all the animal experiments in this study.

Plant Material, Extraction and Solvent Partitioning of the Extract

The leaf of M. acuminata was collected at the ‘‘Shasha’’ Forest Reserve, Area J4, Osun State, Nigeria and authenticated at the Ife Herbarium, Department of Botany, Faculty of Science, Obafemi Awolowo University, Ile-Ife, Nigeria, with Voucher number; IFE16337. It was air dried, powdered and 1.0kg of the powered leaf was exhaustively extracted with 80% ethanol by maceration, filtered and concentrated using rotary evaporator which gave 12.0% w/w yield and the extract obtained was coded, MAE (155.4g).The ethanol leaf extract (150g) was suspended in 300mL of distilled water and partitioned with n-hexane (3x400mL), ethylacetate (4x400mL) and n-butanol (2x250mL) to obtain their corresponding n-hexane (B1, 7.7g), EtOAc (B2, 18.9g), n-BuOH (B3, 75.7g) and aqueous (B4, 38.8g) fractions.

Isolation of Compound and Structure Elucidation

The spectra data of the isolated compound was compared with those reported in literature and was characterized as 4-(3’,3’-dihydroxy- 1-mercaptopropyl) phenyl glucosylpyranoside, known as acuminatoside [12,14] (Figure 1). 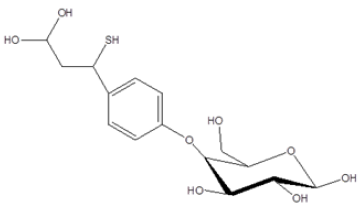 Acute Toxicity Study of the Extract

The median lethal dose, LD50 of Massularia acuminata ethanol leaf was determined in rats by using the 1983 Lorke’s method [20]. Rats of average weight of 150g were fasted for 18h after which the extract at dose range of 10-5000mg/kg were given orally. The experiment was carried out in two phases. The first phase constituted of nine (9) rats that were divided into 3 groups of 3 ra each to which three geometrically increasing doses of 10, 100 and 1000mg/kg of the extract were administered. Each group of the animals were observed for death and or toxicity signs for more than at least 24-hours. The second phase of the toxicity study was carried out with eight (8) rats that were divided into 4 groups of 2 rats each. Four doses of the extract, 1000, 1600, 2900 and 5000mg/kg were administered to each group of rats, respectively. The animals were also observed for death and other signs of toxicity for 24 hours. The LD50 was calculated as the geometric mean of the dose that resulted in 100% lethality and that which caused no lethality at all [21].

Set of normoglycemic rats were fasted for 24h and orally given 10g/kg of glucose and those with blood glucose levels ≥7.0mMol/L or 126mg/dL after 0.5h (T0) were considered hyperglycaemic. They were selected and divided into groups of five and administered with extract at 100,200,400mg/kg, or 1% Tween 80 in normal saline (negative control), or glibenclamide, (5mg/kg, positive control). The tip of the tail of each rat was pricked with lancet and a drop of blood was obtained and dropped onto a glucometer strip and the blood glucose level was read off directly from the glucometer display. The blood glucose levels of the rats were determined and recorded at 0.0, 0.5, 1.0, 2.0, 4.0h after administration of the extract and drug. The blood glucose levels at 0.0h (T0) were taken as 100%, while those at other times were expressed as percentages of these values [21-23]. Also, glucose lowering effects of the partitioned, bulked column fractions and isolate were similarly determined.

The data obtained from the study were expressed as the mean ± SEM for the number (n=5) of animals in the groups. One Way Analysis of Variance (ANOVA) was used followed by Bonferroni t-test or Student Newman-Keuls post hoc tests to determine the source of significant differences. P<0.05 was statistically significant.

In the acute toxicity experiment, no death nor any serious changes in behaviours of the rats related to breathing, cutaneous effect, sensory and nervous system responses or gastrointestinal effects were observed when 5000mg/kg of M. acuminata ethanol leaf extract was administered to the rats. This result confirmed the safety of the extract as well as the doses of the extract used in this work. After the establishment of the safety of M. acuminata ethanol leaf extract, it was further investigated for antihyperglycaemic activity in order to justify or otherwise its folkloric antidiabetic usage.

Antihyperglycaemic Effects of The Extract of M. acuminata (Table 1)

There was a significant time dependent reduction in blood glucose levels up to the fourth hour (Table 1) of glucose-induced hyperglycaemic rats administered with normal saline (negative control) that was due to the homeostatic regulatory mechanism in the normal animals [26]. The reductions explained the healthy state of pancreases of the experimental rats. The M. acuminata extract at 100mg/kg demonstrated a non-time dependent anti-hyperglycaemic activity that was comparable (p>0.05) to the negative control at 0.5-4h while its 200 and 400mg/kg gave a comparable and time dependent effect (Table 1). An activity profile of the extract at 200 and 400kg/kg that was similar and comparable (p>0.05) to that of glibenclamide (Table 1), may indicate similar stimulation of insulin release as its main mechanism of action [21-24]. Furthermore, based on similar profile of anti-hyperglycaemic activity as glibenclamide, extracts of Carica papaya, Xylopia aethiopica, Parquetina nigrescence and Terminalia superba [22,23,27,28] have been reported to have insulin stimulation as their main mechanism of action.

Antihyperglycaemic Effects of the Partition Fractions of M. acuminata (Table 2)

The most active antihyperglycaemic dose of the extract (400mg/kg) with 34% blood glucose level reduction at 4h (Table 1) was used in testing this effect in its partitioned fractions. Generally, all the partitioned fractions (B1-B4) of the leaf extract and glibenlamide (5mg/kg) demonstrated a comparable activity (p>0.05) at 4h indicating stimulation of insulin release as their major mechanism of action (Table 2).The n-hexane fraction (B1) was devoid of activity at 0.5-2h indicating lack of extra pancreatic effect while B2, B3 and B4 gave antihyperglycaemic activity at 0.5-4h that was comparable to glibenclamide (5mg/kg) at all-time points showing both extra pancreatic and insulin stimulation mechanisms of action [24]. The 27 and 31% glucose level reduction of B3 at 1-2h indicated higher extra pancreatic effect of this fraction. None of the partitioned fractions had better antihyperglycaemic activity than the extract suggesting that the antihyperglycaemic constituents of the extract were working in synergism (Table 2).

Antihyperglycaemic Effects of the Column Fractions of M. acuminata (Table 3) 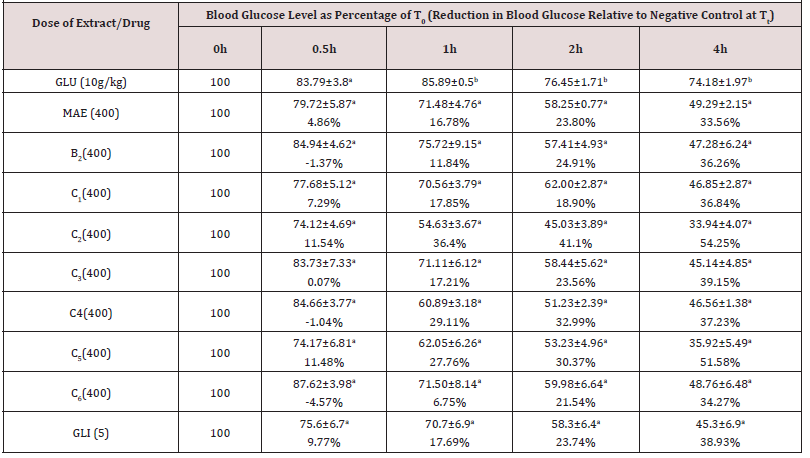 The ethylacetate fraction, B2 with comparable (p>0.05) and similar profile of antihyperglycaemic activity with glibenclamide (5mg/kg) (Table 2) and fewer number of spots on TLC plate than other fractions was chosen for further purification. Like B2, all the bulked column fractions (C1-C6) elicited comparable blood glucose level reduction effect with the standard drug indicating similar mechanism of action [26]. Furthermore, comparable activity of C1-C6 with B2 and the extract further confirmed synergism of the antihyperglycaemic constituents of the plant. Similar synergistic activity of antihyperglycaemic constituents has been reported for Eugenia uniflora [17] . Sub fractions C2 and C5 with 12, 36, 41 and 12, 28 and 30% blood glucose levels reduction activity at 0.5-2h, respectively indicated additional extra pancreatic effect of these sub fractions while the 54 and 52% activity of C2 and C5, respectively at 4h showed them as the most promising insulinotropic sub fractions. Therefore, C5 with good weight and fewer TLC spots was chosen for further purification in order to isolate its insulin stimulating constituent(s).

Antihyperglycaemic Effects of the Isolated Compound from M. acuminata (Table 4)

Lack of death and other signs of toxicity in the animals at high dose of the ethanol leaf extract of Massularia acuminata in this study confirmed its safety. Also, the antihyperglycaemic activities of the extract, partitioned fractions and the isolated acuminatoside at low doses that were comparable to glibenclamide, justified its antidiabetic ethno-medicinal claims.

The authors appreciated Mr. T. Oladele of the Department of Pharmacognosy, Faculty of Pharmacy, Obafemi Awolowo University for his assistance in collecting the plant. Also, the effort of Dr Frank Schweizer of Department of Chemistry, University of Manitoba, Canada in providing the NMR spectra was highly appreciated.