Adjuvant chemotherapy (ACh) benefits in stage II colorectal cancer (CRC) is still unclear. Risk factors (RF) as perineural (PNI) or lymphovascular (LVI) infiltrate in biopsy, T4 or less than 12 lymph nodes (LN) resected during surgery has associated with recurrence. We retrospectively evaluated Ach benefits in stage II CRC patients. This retrospective analysis collected information of CRC patients who were treated at University of Chile Clinical Hospital between 2011-2018 and had histological diagnosis of T3-4N0 colon adenocarcinoma. Clinical, surgical, histological variables, and RF were recorded. Disease-free survival (DFS) was compared in patients who underwent ACh with patients who were observed. Of 91 patients, 51% received Ach and 49% observation. Median age was 60± 13 years. ACh were FOLFOX, CAPOX, capecitabine or FU/LV in 70%, 17%, 11%, and 2% of patients, respectively. DFS was 45 and 36 months in ACh and observation groups (p=0,277). RF were present in 62%, and of these 73% received ACh and 27% observation. There were no association of T4 stage, PNI and/or LVI with improve DFS and response to ACh. Recurrence was presented in 12,6% of patients and 75% of this presented one or more RF. In this retrospective cohort, ACh did not improve DFS compared to observation only. In our study, 25% of recurrences are in patients without RF, therefore it is necessary to improve strategies to predict recurrences and response to ACh. Further studies should evaluate other elements to optimize the decision to administer ACh in these patients, such as microsatellite instability and circulating DNA.

Colorectal cancer (CRC) have a growing incidence in developed countries [1,2], and is one of the main causes of mortality due to cancer worldwide [3]. Major improvements in disease‐free survival (DFS) and overall survival (OS) in patients with non-metastatic colon cancer has been as a result of improvement of surgery quality [4-6] and continuous clinical trials investigation on adjuvant chemotherapy (ACh) [7–9].

Despite well-stablished role of ACh as standard treatment in patients with stage III, the current evidence does not support routine ACh in stage II patients [10]. It’s have been shown a 70-80% of curative rates with only surgery in patients with stage II [11], in consequence, selection of patients who are candidate to ACh need to be rigorous. Due to benefit in stage II CRC is still unclear, it must be considered potential toxicity of chemotherapy agents, for instance, the potentially debilitating neuropathy related to oxaliplatin as well as the arguably benefit of oxaliplatin in patients >70 years of age [12,13].

It’s have been identified risk factors (RF) based on pathologic and clinical characteristics, according to National Comprehensive Cancer Network (NCCN) guidelines, present of perineural (PNI) or lymphovascular (LVI) infiltrate in biopsy, T4 or less than 12 lymph nodes (LN) resected during surgery are associated with recurrence of disease [10]. Emerging advances for personalized therapy have found different molecular profiles in stage II, molecular markers as microsatellite stability (MSI) could help to decide which patients will benefit of ACh [14,15].

In our study, we retrospectively evaluated patients with stage II colon cancer, in real world data analysis with a specific emphasis on the practice of ACh selected by clinical and pathologic features.

A retrospective observational study was conducted at Oncology Section of University of Chile Clinical Hospital. Retrospectively, it was collected date from clinical record of 127 patients presented to at our Oncology Committee between 2011 and 2018. These patients have clinical CRC diagnosis and histological diagnosis of T3- 4N0 colon adenocarcinoma. Inclusive criteria were:

2) Having been pathologically diagnosed with stage II colon cancer.

3) Having a curative intent surgery resection with lymphadenectomy

4) Having treated or controlled in our institution.

This research was presented to Ethics Commitee of University of Chile Clinical Hospital.

In all patients age, sex, clinical comorbidities, surgical procedure, biopsies results, and blood samples were obtained by clinical records. Pathological examination and stage classification were according to TNM Classification of Malignant Tumours, eighth edition [16]. Also, RF were recorded, and were defined in concordance to European Society for Medical Oncology (ESMO) Clinical Practice Guidelines [17]. High risk patients were considered if they have at least one of these characteristics: lymph nodes sampling less than 12, LVI and/or PNI and pT4 stage.

The ACh protocols were determined by our institution Oncology Committee directed by local and international guidelines. High risk patients, according to previously mentioned criteria, were candidate to receive ACh. Chemotherapy agents include FOLFOX (leucovorin, fluorouracil and oxaliplatin), CAPOX (capecitabine and oxaliplatin), capecitabine or FU/LV (fluorouracil and leucovorin). Duration and dose were following standard doses.

Disease-free survival (DFS) was calculated starting the first day after surgery to recurrence of tumour determined by clinical and imaging records. Due to the features of observational and real- world data study, minimum sample size was not calculated. DFS were presented in Kaplan‑Meier curves and statistical differences was assessed using the log-rank test. Univariate Cox’s proportional hazards model (HR, 95% CI) was used in RF analysis. Statistical analysis and graphics were performed by GraphPad Prism 5.0 software. A significative result was considerate if p-value is less than 0.05.\

Patients selection and clinical characteristics: Between 2011-2018, 127 patients-initiated treatment in our institution and meeting the inclusion criteria. Sixty underwent to ACh, and 67 were observed. However, 14 patients in ACh group and 22 in observation group were excluded because they controlled and continued therapy in a different health center. Our analysis includes 46 patients in Ach group and 45 patients in observation group. Main clinical characteristics are summary in Table 1. Most patients were men (57% in ACh group, and 56% in observation group) and median age was 56.7 and 63.4 in ACh and observation group, respectively. Median follow-up was 40.3 months. ACh treatments included FOLFOX, CAPOX, capecitabine or FU/LV in 70, 17, 11 and 2% of patients, respectively. In ACh group a total of 93% participants concluded a 6 months treatment and only 7% terminated a 3 months scheme. 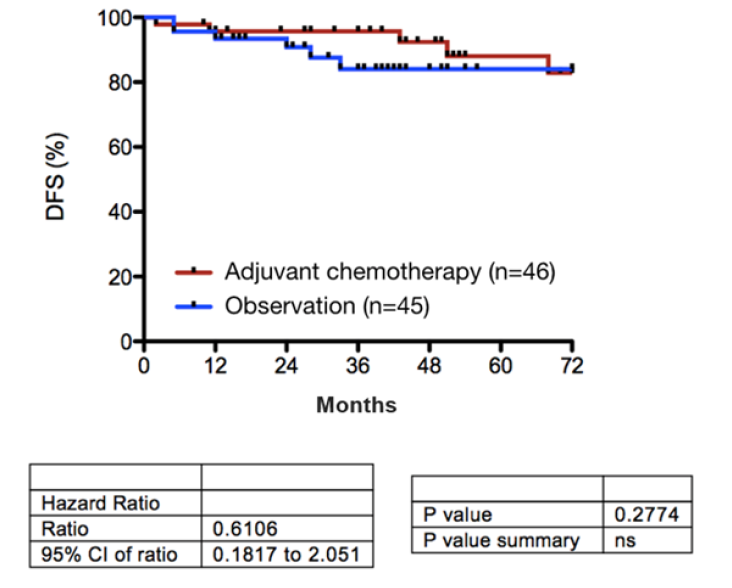 Despite continues advances in oncology, there are still controversies about adjuvant chemotherapy in stage II colon cancer. For stage III, ACh benefices have been shown in MOSAIC study, finding a significant improvement in DFS and overall survival (OS) [9]. Consequently, a combination of oxaliplatin with fluoropyrimidine has established a standard therapy in stage III colon cancer according to European [17] and US guidelines [18]. Nevertheless, previous reports have not demonstrated the same outcomes for stage II. Results from IMPACT B2 have not evidenced a significative improve in OS and DFS using ACh based on FU/LV compared versus surgery [19]. In contrast, QUASAR Trial documented a positive and significative benefit with FU/FV in all-cause mortality, although is a modest improvement in absolute survival of only 3.6% at 5 years [20]. In our analysis, is not reported a statistical significative difference in DFS by adding any type of ACh compared to only observation (HR= 0.610 [95%CI= 0.1817 – 2.051], p=0.277). This reinforces the idea that ACh should not be routinely indicated in patients with stage II colon cancer. In addition, recurrence rate was 12.6%, like other studies as Japanese Society for Cancer of the Colon and Rectum [21], that reported a 13.3% recurrence rate in a retrospective follow-up.

The principal guidelines have suggested classifying stage II according to histopathological clinical characteristics [22]. High risk profile is considered if it has any of the following characteristics: present of perineural (PNI) or lymphovascular (LVI) infiltrate in biopsy, T4 or less than 12 lymph nodes (LN) resected during surgery [10]. In fact, a worse tumour-specific survival and DFS has been reported with the presence of more than one risk factor in a patient who did not receive chemotherapy [23]. In addition, a retrospective study of stage II patients shown decrease in general mortality in patients with high risk profile who underwent to ACh compared with only surgery group. However, this same effect was not seen in DFS in same groups [24]. In our study, did not find a benefit in DFS when comparing observation and ACh groups, in high risk profile patients. Recently, it has been proposed that the addition of oxaliplatin may not be superior to fluoropyrimidine-based regimens for high-risk stage II colon cancer [25]. In our cohort, 70% of patients received FOLFOX, this amount of patients treated with oxaliplatin should be considered in interpretation of non-differences outcomes between observation and ACh in high-risk groups.

Several study limitations should be considered, due to their characterises of retrospective and unicenter study could not be obtained a larger sample and evaluated other variables that might be a source of bias as socioeconomical status, performance status and comorbidities. The presence of microsatellite instability was not considered as a prognostic factor, since it is a measurement of recent practice in our center. Despite limitations a strength of this study is the use of real-world data methodology, that include a flexible inclusion criterion, that do not exclude older age or by comorbidities. These groups of patients have been underrepresented in randomised controlled trials [26].

In this retrospective and real-world data study is evidenced that usual clinical practice to select patient candidates to ACh in stage II colon cancer through high risk factor profile could be insufficient. It did not demonstrate a benefit in patients with a positive risk factor as PNI, LVI or T4. Even, a 25% of recurrences were in patients without RF. In this perspective, emerging strategies to predict a recurrences and response to ACh in stage II colon cancer are needed beyond the classical approaches of clinical and pathological risk factors.

Authors would like to thank to Surgery Department of University of Chile Clinical Hospital, as well as the administrative staff that helped with data collection and follow-up of patients.

The authors have no conflicts of interest to disclose.