To design appropriate materials for tissue engineering, a profound understanding of the cell-material interaction is essential. We are of the opinion that the zeta (ζ) potential has a decisive role in the cell behaviour, outshining wettability. Here we present a comparative analysis of the MG- 63 osteoblastic cell spreading behaviour on negatively and positively charged surfaces in the hydrophilic range. The results indicate a correlation of the cells’ spreading area with the surface charge. Thus, the ζ-potential should be considered as a key parameter for cell interactions at the biomaterial interface.

Materials that are coated with polymers are currently being widely used in biomedical applications. This involves a high degree of interaction at the cell-material interface. Depending on time and distance of cells to the material surface the four initial adhesion phases were described as surface recognition, early attachment stage, intermediate attachment or membrane adhesion, and late adhesion or spreading phase [1], profoundly influencing the further cell viability, growth and cell function. To select appropriate materials for tissue engineering, a sound understanding of this cellmaterial interaction is indispensable [2]. Considering the biological relevance of these interactions, numerous research groups are focusing on this issue. However, as Vendre et al. [1] stated, the “cellmaterial communication code” is still not fully deciphered to define precise principles that govern the cell-material crosstalk.

Although a variety of material surface properties (chemical, topographical or mechanical [1]) have been reported to contribute to the nature of cell-material interactions, no general rules could yet be developed allowing predictions of cell attachment, spreading, or growth [3]. Considering for example the wettability of a surface, several studies indicate that hydrophilic surfaces promote the cell adhesion [4], while hydrophobic surfaces often inhibit the crosstalk between cells and materials [5]. However, there are also exceptions to the rules [6].

Accordingly, to our opinion, Spriano et al. [7] claimed that systematic studies of diverse materials in the same investigative conditions are still lacking in literature. We assume that not the wettability but the surface charge via ζ-potential strongly affects the cellular behaviour at the interface. Here, we focused on the spreading course, as the cell area and morphology have been accepted as good indicators of the occupation of materials by cells [1,3]. Human MG-63 osteoblasts were cultured on Titanium (Ti) coated with the positively charged plasma polymerized allylamine (PPAAm) nanolayer and with polyelectrolyte nanofilms terminated with negatively charged poly(styrene sulfonate) (PSS) and positively charged poly(diallyldimethylammonium chloride) (PDADMA).

The surface charge via ζ-potentials at pH 7.4 were assessed by the SurPASS™ system (Anton Paar, Ostfildern, Germany) in a 1mM KCl solution [8] (n = 3, three pairs of samples). Wettability via Water Contact Angles (WCA) was assessed by the sessile drop method using the Drop Shape Analyzer-DSA25 (Krüss, Hamburg, Germany) [8] (n = 3 at 3 drops each).

Cell membranes were stained with the PKH-26 General Cell Linker Kit (Sigma-Aldrich Chemie, Taufkirchen, Germany) for 5min at 37°C in suspension [14]. 50,000 vital stained cells/cm² were seeded onto the substrates and cultivated for 1, 3 and 12h. Cell areas after 24h were assessed by fluoro-3-acetoxymethyl ester stained cells (fluo-3, Life Technologies Corporation, Eugene, Oregon, US) [8,15]. Microscopic images were obtained using a confocal laser scanning microscope LSM780, a C-Apochromat 40x/1.20W Korr M27 objective and the ZEN black software 2011 SP4 (Carl Zeiss, Jena, Germany). The cell area in μm² of 45 cells per surface and per independent experiment was determined using the ‘‘measurement report’’ of the software Photoshop CC 2017 (Adobe, San Jose, CA, USA) (n = 3 for 1 and 24h, n = 2 for 3 and 12h). 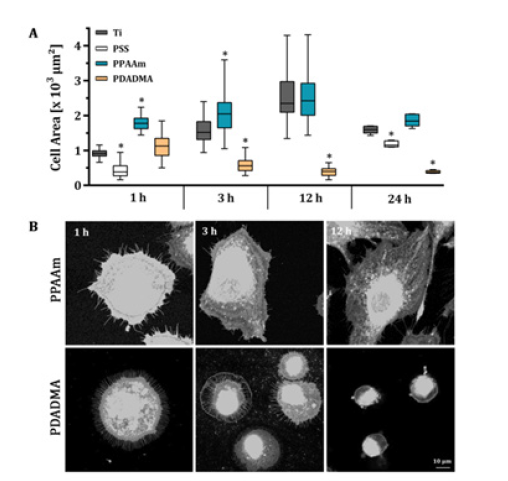 Figure 1: Spreading course of MG-63 osteoblastic cells on a plasma polymer nanolayer (PPAAm) and on polyelectrolyte nanofilms (PSS, PDADMA) vs. Ti. (A) Time-dependent spreading course over 24h. (B) Exemplary microscopic images of PKH-26 stained cells on PPAAm and PDADMA after 1, 3 and 12h. Note that in the early phase of cell spreading the positive charges dominates the negative charges. However, observing the time-dependent spreading the PDADMA surface with a very high positive ζ-potential (~ +50 mV) impeded dynamic cell spreading from 3h on although the surface is hydrophilic. (Statistics: Kruskal-Wallis and Dunn’s multiple comparison test, p < 0.05, *indicates significance to the Ti control; medians ± interquartile ranges with maximum and minimum; n = 3 á 45 cells for 1 and 24h; n = 2 for 3 and 12h; LSM780).

In our experiments the wettability seemed not to play a decisive role for cell spreading. PSS surfaces were hydrophilic with a WCA similar to PPAAm (68°) [8], but negatively charged as the Ti surface (-82mV [16]). However, the hydrophilic PPAAm with a positive ζ-potential of +8mV [16] displayed the highest initial cell area (Figure 1); spreading course 1, 3, 12 and 24 h: Ti 913 -1518-2347- 1592μm², PPAAm 1778-2047- 2425-1840μm², PDADMA 1127-559- 397-374μm², respectively; spreading 1 and 24h: PSS 385-1151μm², respectively). Related observations have been reported in literature where cell adhesion, morphology and apoptosis of MG-63 cells on poly(amidoamine) (PAMAM) polymer thin coatings with different terminal functions were examined. Hydrophilic PAMAM-NH2 surfaces with a positive ζ-potential of +22mV evoked increased cell attachment and spreading with a well-organized actin cytoskeleton within 24h. In contrast, on hydrophilic PAMAM-CO2H and -CH3 surfaces with a negative ζ-potential, cells were impaired in their spreading and revealed an increased number of apoptotic cells, although both were hydrophilic (WCA: 33° and 44°, respectively) [17].

Our positively charged PDADMA surfaces were hydrophilic with WCA values of ~ 40°, but cells ignored this hydrophilic environment and exhibited an impaired spreading behaviour after an initial tendency to spread better than Ti. A reduction of the cell area occurred, demonstrating the additional strong influence of a very high positive ζ-potential with ~ +50mV for PDADMA on the spreading behaviour. Interestingly, the cells seem to favour only a certain spectrum of ζ-potentials, being neither in the negative nor in the highly positive range - independent of the hydrophilicity.

The ζ-potential appears to be of great importance for the cellular spreading as indicator of the cell-material interaction and should be considered as a key parameter when designing and investigating new materials for medical applications.