Evidence based study of Hypoglycemic Potential of Bitter Melon Peptide

Momordica charantia (M. charantia), commonly referred to as bitter melon was received much attention for its anti-diabetic properties in recent years. The aim of this review was to discuss the bioactive peptides in bitter melon through their in vitro, in vivo and clinical studies for diabetes. Research showed that bitter melon peptides acted as the α-amylase or α-glycosidase inhibitor delayed the absorption of glucose from carbohydrates. Another noteworthy mechanism was the glucose intake regulation by insulin-like activities to enhanced insulin receptor kinase activity which activated IR signaling transduction pathway, resulted the translocation of glucose transporter 4, and uptake of glucose to cells. The remarkable effect of bitter melon peptide (mcIRBP-19) in patients with diabetes was also reported in the clinical study. This study summarized the scientific evidence of bitter melon peptides in regulating blood sugar levels through bioactive mechanisms. The bioactive peptides from bitter melon might open up new opportunities for the management of diabetes.

Diabetes mellitus (DM) was considered as one of the five leading causes of death in the world. It was a syndrome of disordered metabolism, usually due to a combination of hereditary and environmental causes, and attributed to defective insulin secretion, resistance to insulin action, or a combination of both. On the basis of the pathogenic process that lead to hyperglycemia, diabetes was classified into type 1 diabetes (insulin-dependent) and type 2 diabetes (non-insulin-dependent) [1,2]. Ordinarily, the people below 18 age suffered from the type 1 diabetes, whereas type 2 diabetes mainly occurred in adult and old age group. According to the World Health Organization, approximately 10% of all diabetes cases were type 1, and the remaining 90% cases of diabetes worldwide were of type 2, the number of people with DM worldwide had soared from 128 million in 1980 to 422 million in 2014. DM was one of the major threats to human life in many countries. Health-care professionals usually recommend controlling patients’ blood sugar levels through a combination of drugs, diet controls, and regular physical exercise [3-5]. Still, no drug was available which had the ability to completely cure type 2 diabetes. Generally, to treat type 2 diabetes, oral hypoglycemic agents were used [6]. 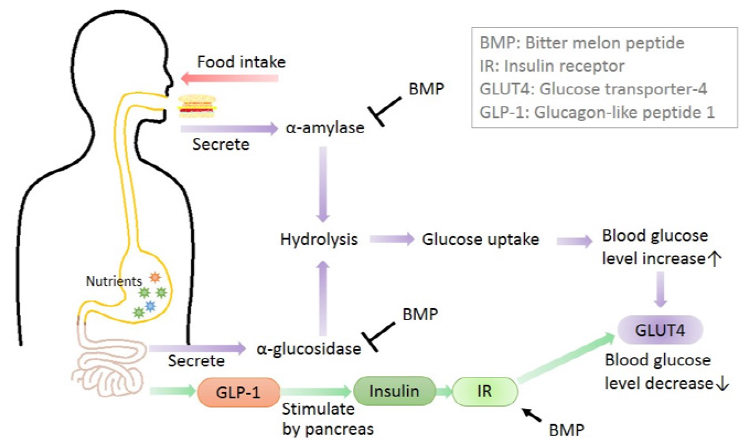 Some risk factors involved in DM were mainly due to postprandial hyperglycemia. Dietary carbohydrates were broken down into simple mono saccharides by a group of digestive enzymes called α-amylase, α-glucosidases and elevated postprandial hyperglycemia was due to action of these enzymes. Postprandial hyperglycemia in diabetes could be managed by inhibiting α-glucosidase. Inhibitors of this enzyme decreased the glucose toxicity (improved insulin sensitivity) and stress on beta cells (decreases post-meal hyperglycemia), increased glucagon like peptide-1 (GLP-1) production hence stimulating insulin secretion [13]. Marella et al. [10] reported that MCP showed inhibitory activity on α-glucosidase and aldose reductase enzymes in in vitro test and a significant decrease in fasting blood glucose levels (267.1 ± 11.2 mg/dL to 87.5 ± 12.0 mg/dL) with MCP treated diabetic rats was discussed. Poovitha and Parani [7] also reported that the maximum of 68.8 and 69.2% inhibition of α-glucosidase activity was observed at 2.5 mg/mL concentration for the MCP from two different bitter melon spices, respectively. And the maximum 66.5% and 67% inhibition of α-amylase activity was observed at the same dosage. The Line weaver-Burk plot showed that the MCP inhibited the α-amylase and α-glucosidase enzymes by competitive binding. In vivo studies revealed peak blood glucose (PBG) and area under the curve (AUC) were significantly reduced in the diabetic rats with orally administered with the protein extracts after starch or sucrose loading.

Bitter melon contained a high dosage of ‘plant insulin’ [14] and effectively lowered blood sugar by reducing the speed of nephropathy development in streptozotocin (STZ)-induced diabetic rats [15], improving intestinal disorders caused by diabetes [16], enhancing the function of the intestine, and delaying development of cataracts [17]. Researches further indicated that bitter melon peptide had a hypoglycemic effect upon insulin-like biological activity and could regulate blood sugar to normal levels. As shown in Figure 2, insulin binding to insulin receptor (IR) stimulated the auto-phosphorylation of IR, leading to the activation of phosphoinositide-3-kinase (PI3K) and Akt, the translocation of glucose transporter 4 (GLUT4), and the subsequent glucose uptake of adipocytes and skeletal muscle [18]. Lo et al. [11] identified a hypoglycemic polypeptide, Momordica charantia insulin receptor (IR)-binding protein (mcIRBP) which was identified a novel 68-residue (mcIRBP-68). After digestion of mcIRBP-68 by simulated gastric and intestinal fluids, the peptide fragments were analyzed by LC–ESI-MS/MS. Five digestive residues of mcIRBP-68 were analyzed and the 19 amino acid residue consensus peptide(mcIRBP-19) had shown the highest IR binding activity by expressing as relative radioactivity from [125I]-insulin in IL-9 cell culture test. Study reported mcIRBP-19 was a putative IR-binding and blood glucose-lowering bioactive peptide. The mcIRBP-19 activated the kinase activity of IR, stimulated the IR-downstream signaling transduction pathway, enhanced the expression of GLUT4, and increased the glucose clearance in diabetic mice. 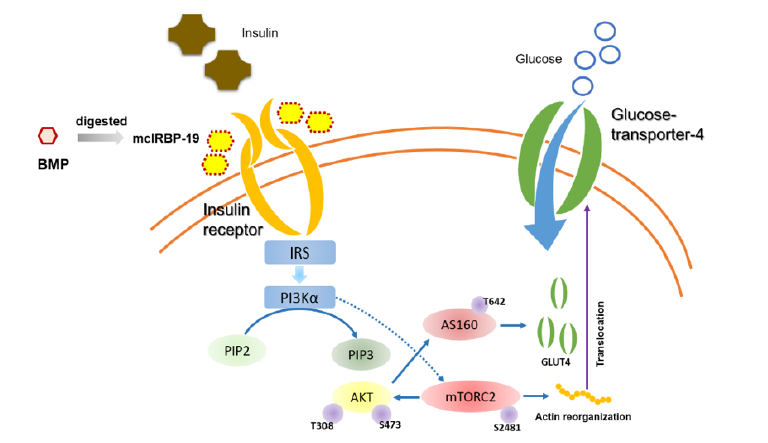 Epidemiological data revealed that type 2 diabetes required promising therapy to reduce the severe adverse effects of synthetic drugs. The bitter melon peptides with multiple mechanism could help to maintain the levels of blood sugar, such as inhibiting the enzymes like α-glucosidase and α-amylase, and insulin-mimetic activity from bioactive peptides (mcIRBP-68 and mcIRBP-19). Recent studies also suggested that a regular intake of bitter melon peptides may benefit other human organ functions. Although the bitter melon peptides should not be used to replace the DM patient’s medication, bitter melon peptides had the potential to the future applications of the anti-diabetic material of health food or drug development. Further chemical and pharmacological studies should be conducted to confirm its effectiveness.