Immune checkpoint inhibitors (ICPI) such as ipilimumab (anti-cytotoxic T-lymphocyte antigen-4 (CTLA-4) antibody) and nivolumab (antiprogrammed cell death protein-1 (PD-1) antibodies) are novel chemotherapeutic agents used in multiple advanced metastatic malignancies. They are well known for their immune-related adverse events [1]. Although diarrhea and enterocolitis have been documented as gastrointestinal side effects of ICPI, gastritis has been rarely reported as a side effect of ICPI. Here, we present a case of a 65-years old female with advanced hepatocellular carcinoma who developed autoimmune like gastritis after treatment with Nivolumab [2].

Immune-checkpoint inhibitors are a novel class of chemotherapy currently approved for treatment of multiple metastatic cancers. This class of medications includes anti programmed cell death protein-1 (PD-1) antibody, anti-cytotoxic T-lymphocyte antigen-4 (CTLA-4) antibody, and anti PD-L1 which have shown to improve survival rate of cancer patients in clinical trials [3]. As a result, their clinical use has increased

Significantly. Nivolumab is a fully human IgG4 programmed death 1 (PD-1) immune-checkpoint inhibitor antibody that works by disrupting PD-1 mediated signaling and may restore antitumor immunity [6]. Blockade of immunity checkpoints is associated with inflammatory side effects, known as immune-related adverse events (irAEs) [4,5,6]. These events can affect any organ system and typically target the gastrointestinal, hepatic, skin, and endocrine systems [7,8].With respect to the gastrointestinal tract, the colon is the most commonly affected. To our knowledge few case reports have shown gastric involvement. Here, we present a rare case of Nivolumab induced autoimmune like gastritis.

A 65-year-old female with recurrent hepatocellular carcinoma (HCC) on Nivolumab presented with intractable nausea, vomiting, and abdominal pain. Her medical history was also notable for a remote history of ulcerative colitis in deep remission for which she was not on treatment and hepatitis C [9]. She initially presented in 2013 with pT1Nx cholangiocarcinoma s/p resection. In 2016 she was found to have new liver lesions consistent with HCC on biopsy for which she underwent ablation [10,11]. In January 2018 she endorsed recurrent right upper quadrant pain. An MRI of the abdomen and pelvis without MRCP sequence was done during this presentation and she was diagnosed with advanced Stage C HCC [12]. She was started on Sorafenib in March 2018, however, follow up MRI in August showed disease progression [13]. In October 2018, her oncologist initiated Nivolumab as a second line treatment option for metastatic HCC [12,13].The patient had received a total of 6 doses of Nivolumab when she began to have intractable nausea, vomiting and abdominal pain resulting in anorexia in February 2019.She was directly admitted from a follow up appointment due to the severity of her symptoms [10].

Upon initial inpatient evaluation, she was afebrile with normal vital signs. Labs were notable for WBC 4.7, Hgb 10.4 (patient’s baseline), BUN 8, Cr 0.7, K 3.6, LFTs and transaminases were within normal limits. Abdominal x-ray was negative for obstruction. CT of the abdomen and pelvis with contrast was notable for known metastatic HCC, with some evidence of improvement compared to prior imaging in January 2019. Subsequently, EGD was performed with multiple biopsies taken from gastric antrum, body and duodenum (Figure 1). Hematoxylin an eosin staining showed severe acute gastritis with necro-inflammatory debris diffusely involving the entire stomach and first part of the duodenum. Biopsies from the gastric body showed marked reduction of acid secreting cells with destruction of the glands in the background of diffuse lymphoplasmacytic infiltration (Figure 2). Biopsies were negative for H. Pylori infection. Overall, these findings were consistent with an autoimmune gastritis like picture. To rule our other causes of autoimmune gastritis, anti-parietal cell antibodies, anti-intrinsic factor antibodies, and anti-histone antibodies were drawn and found to be negative. On combining the histopathological, serological and clinical findings, we favor this to be Nivolumab related autoimmune like gastritis. 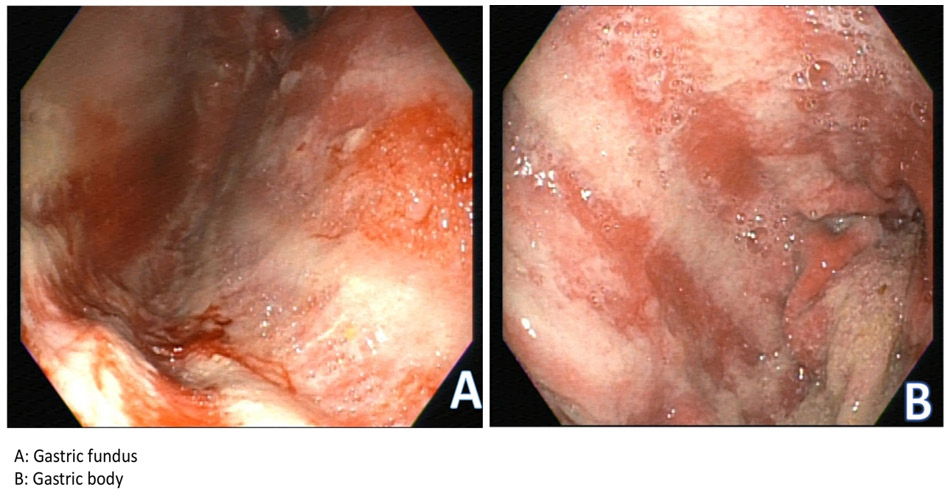 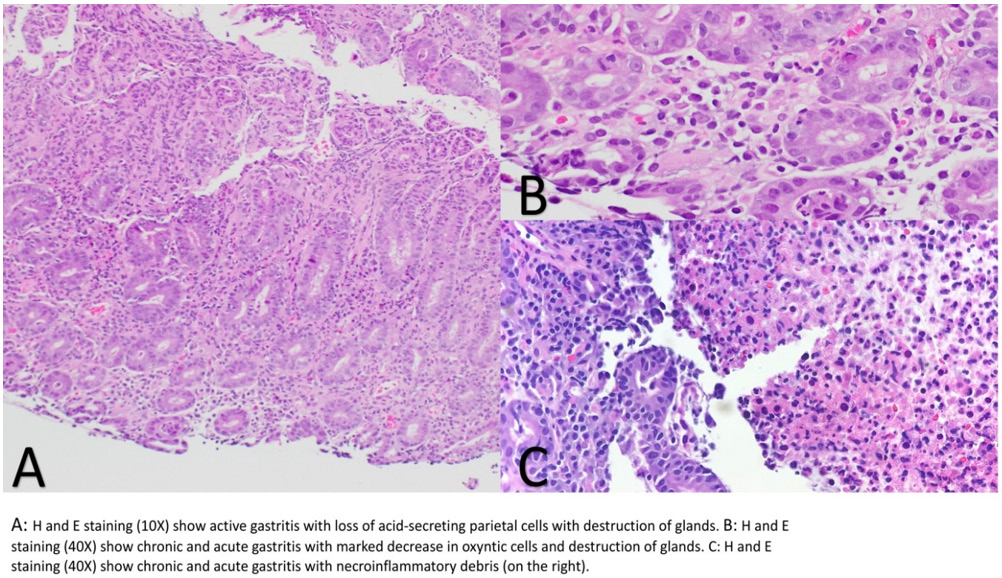 Immune checkpoint inhibitors (ICPIs) have greatly contributed to the treatment of metastatic cancers. The physiological role of immune checkpoints, such as cytotoxic T-lymphocyte antigen-4 (CTLA-4) and programmed cell death protein-1 (PD-1), which are expressed primarily on T cells, is to regulate the degree of T cell activation to prevent exaggerated immune responses or autoimmunity[14,15] , but may also result in an acquired tolerance to certain pathogens. In particular some tumors demonstrate high levels of the ligand PD-L1, blunting the immune response against them. This interaction can be circumvented through the use of PD-1 or CTLA-4 inhibitors, facilitating cytotoxic T cell activity against such tumors [16,17].Since inhibition of PD-1 or CTLA-4 leads to nonselective activation of the immune system, immune-related adverse events (irAEs) are frequent and commonly include enterocolitis, thyroiditis, pneumonitis, hypophysitis, and pancreatitis [7,11]. Most irAEs are manageable, but they can occasionally be very severe and even fatal as in cases with enterocolitis that leads to intestinal perforation [14,18,19].

Severe or life-threatening irAEs are more common with CTLA- 4 blockers (reported rates of 20–27%) than with PD-1 blockers (13–16%), whereas with combination treatment the rate rises to around 50% [14,20,21].Gastrointestinal AEs are the most common irAEs associated with immune checkpoint inhibitor treatment, often resulting in diarrhea and colitis [14,22,23]. Clinically, PD-1 inhibitors have been shown to cause less severe side effects that are somewhat distinct from those of ipilimumab and idelalisib. In clinical trials, the reported incidence of diarrhea with CTLA-4 inhibitors was 23-33% (severe diarrhea 6-9%) while with PD-1 inhibitor it was 11-19% (severe diarrhea 1-3%). The incidence of colitis with CTLA-4 inhibitor was 8-12% (severe 7-9%) and with PD-1 inhibitor it was 1-4% (severe colitis <1-3%) (2, 26-28). In general, severe complications are less frequent in patients taking PD-1 inhibitors than in those taking CTLA-4 inhibitors [16, 24,25]. The treatment of irAEs is based on the severity of the symptoms. Mild diarrhea/enterocolitis can be managed with symptomatic therapy, but in moderate and severe cases, intravenous corticosteroids are used [14, 22, 23].

If corticosteroids are not sufficient, more potent immunosuppressive agents such as infliximab, mycophenolate mofetil, or calcineurin inhibitors are recommended [26,27]. Patients with pre-existing autoimmune disease (AID) who are being treated with PD-1 inhibitor are at higher risk of irAEs and can occur earlier than those without AID [28-30]. Recent study has shown 23% of patients with AID experienced a flare of their disease while being treated with PD-1 inhibitor [31].Autoimmune gastritis secondary to Nivolumab has rarely been reported. To our knowledge, few cases of autoimmune gastritis in patients on Nivolumab immunotherapy have been reported thus far [4, 7]. Previous reports have shown lymphocytic infiltration in the lamina propria and epithelium of the involved mucosa [4,7]. However, previous cases did not perform serological studies to rule out other causes of autoimmune gastritis as we did in our patient. Immunomodulation is becoming an increasingly common therapeutic approach in patients with advanced malignancy, and therefore its side effects are also becoming more prevalent [16]. Physicians need to be vigilant with regards to these complications in patients being treated with the new class of check points inhibitors who present with gastrointestinal symptoms, perhaps more so in those with pre-existing autoimmune disease [27,28,32].