Conclusion: The findings of this study demonstrated that sepiolite enhances the functions of the cementoblasts involving new cementum formation which is critical for periodontal regeneration. Results suggested that sepiolite has potential as a graft material in dentistry and medicine.

To date several alternative biografts for regenerative purpose have been synthesized. Trace elements like; boron, selenium etc. were incorporated to the materials to induce mineralized tissue formation [9-11]. Gelatin, cuttlefish backbone, meerschaum sepiolite, hydroxyapatite and chitosan based scaffolds as graft substitutes were provided acceptable mechanical structure and cell viability rates [12,13]. Sepiolite known as meerschaum is nanoclay which has complex magnesium silicate. Sepiolite might have potentials for regenerative therapies due to extremely active surface area (~300 m2/gr) [14,15], safety and easily accessibility in nature.

The aim of regenerative therapies is to improve the migration, proliferation, and differentiation progenitor and/or stem cells to the differentiated cells synthesizing extracellular matrix components appropriate for targeted tissue/organ. Cementum is specialized calcified substance covering the root of a tooth and the part of the periodontium that attaches the teeth to the alveolar bone by anchoring the periodontal ligament [16]. The regeneration of periodontium requires key components including cells, signals, scaffolds, and an appropriate niche providing wound healing without scar formation. Osteoblasts, cementoblasts, progenitor cells/mesenchymal stem cells for new alveolar bone, cementum and periodontal ligament tissue formation respectively are the criteria of the periodontal regeneration [17]. Due to limited regenerative capacity and avascular structure of cementum; the induction of tooth root lining cells is very critical [16,17]. The aim of this study is to assess the effects of sepiolite on the proliferation, mRNA expressions of the mineralized tissue associated genes; including Bone sialoprotein (BSP), osteocalcin (OCN), collagen type I (COL-I), runt-related transcription factor 2 (Runx2), and alkaline phosphatase (ALP) and biomineralization of the cementoblasts.

Sepiolite at 100 mg/mL concentrations were incubated in 5% DMEM medium for 72 hours at 37oC according to ISO 10993- 12:2007 and 7405:2008. After incubation period, media obtained containing bioactive components released from graft materials and this extract medium was filtered using 0.22 μm pore size filter for cell culture experiments.

The effect of sepiolite on the cementoblast’s proliferation, real time cell analyzer (RTCA-SP; xCELLigence) was used. 200 μL cell suspensions, (5 x103 cell/well) was seeded to the wells of a 96-well view E-plate for 24 hours. The following day, 200 μL DMEM containing released components of sepiolite was applied to each well and the proliferative curve of the cementoblasts was determined every 15 minutes for 170 hours.

Cells were added in 60 mm cell culture dishes 25×103 cells/ cm2 for 24h. Then, OCCM-30 cells were treated with the DMEM with sepiolite and total RNA was isolated using a monophasic solution of phenol and guanidine isothiocyanate on day 3 and day 6. The RNA concentrations were measured at nanodrop and stored at -80oC until complementary DNA (cDNA) synthesis. First-strand cDNA was transcribed from 1μg of RNA by cDNA synthesis kit in accordance with the manufacturer’s protocol. Quantitative real-time polymerase chain reaction was also performed with the Strategene MX3000P with SYBR Green QPCR Master Mix in triplicate. The amplification profile included 95/600; 95/15; 60/60; 72/30 (temperature in °C/time in seconds), and 35 to 40 cycles. The primers for mouse BSP, OCN, COL-I, RunX2, ALP and GAPDH were used in PCR reactions (Table 1).

Table 1: Synthetic oligonucleotide primer sequences for RT-PCR. All sequences are from mouse and listed 5’ – 3’. GAPDH was used as housekeeping gene for normalization.

Statistical analysis: The values for cell index and mRNA expressions were analyzed by ANOVA using Graph PadPrism software. The results were presented as means ±SEM. P values ≤0.05 were considered as statistically significant. 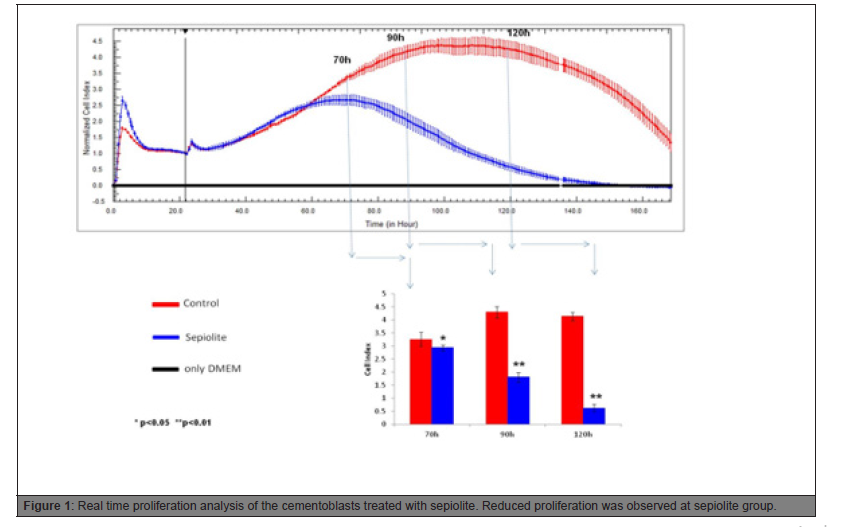 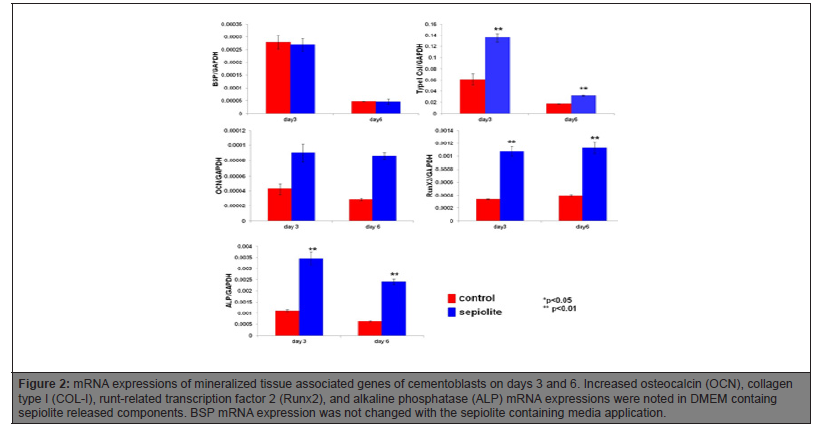 Sepiolite up-regulated significantly important mineralized tissue associated gene’s mRNA expressions and biomineralization of the cementoblasts whist it reduced cell proliferation. While the differentiation of the cells was stimulated, reduced proliferation was expected. Cells stop the proliferation, while they synthesized extracellular matrix which was required for differentiation [18].We may conclude that Sepiolite is a promising graft material when the inductive properties taken into account in biomineralization process of the cementoblasts. In our previous study [19], we evaluated different regenerative graft materials (Nanobone®, BioOss®, Emdogain ®, Endobon® ) on the cementoblasts and we found that Bio- Oss apparently regulated better gene expressions playing role in the formation mineralized tissues compared to other graft materials. Sepiolite and BioOss were comparable in both mRNA expression and biomineralization experiment. While BioOss bovine derived particulated bone graft, sepiolite is clay materials and absolutely the cost is low and easily accessible when compared to BioOss [19].

In our previous studies, we evaluated the effects of BMP-7, recombinant amelogenin, bFGF, dexamethasone on the cementoblasts [6-8]. According to our experiences on the cementoblasts, sepiolite might be a good candidate material for periodontal tissue engineering in dentistry. Further animal studies should be conducted to evaluate potential of sepiolite in the critical size defects for orthopedic usage. Other differentiation and/or growth factors containing graft materials are very expensive. If the targeted effects were possible with the sepiolite, and the response of the cells was comparable, we should prefer cost effective treatment alternatives considering the biological response of the cells to the materials. However, in this study we evaluated only one cell and the cells were mouse originated. And in vitro studies have some limitations to mimic clinical conditions in human. Further studies are required evaluating osteoblasts, periodontal ligament mesenchymal stem cells as well. Moreover, bioactive properties of sepiolite can be enhanced including some element to these materials like boron. In future boron or selenium containing sepiolite biomaterials can be investigated. Sequential elemental releasing can be also considered for future applications.