In patients with peripheral artery disease (PAD), the blood supply directed to the lower limbs is reduced. This results in severe limb ischemia and thereby intermittent claudicating which is characterized by pain in lower limbs that occurs with walking and is relieved by rest. Of note, PAD can extremely affect the quality of living of patients and increase high risk of coronary and cerebral vascular accidents. However, effective treatments of PAD are still challenging in clinics. A number of reports have demonstrated the beneficial effects of supervised exercise on symptoms of PAD patients. This review will summarize results obtained from recent human and animal studies, which include the abnormalities in sympathetic control of blood pressure response during exercise in PAD, and rationality of animal models used for study human PAD. Nonetheless, additional in-depth studies are necessary to better explore the underlying mechanisms of the exaggerated responses of sympathetic nerve and blood pressure in PAD at molecular and cellular levels.

Peripheral artery disease (PAD) is a common and disabling disease affecting 12 to 20% of Americans over age 60 [1,2]. It is caused by atherosclerotic vascular disease that results in progressive narrowing of the lower extremity conduit vasculature. PAD can lead to severe limb ischemia. Thus, the classic discomfort syndrome of PAD is termed “intermittent claudication” which is characterized by pain in lower limbs that occurs with walking and is relieved by rest. This in turn limits walking tolerance. Importantly, PAD patients are at high risk of myocardial infarctions, cerebral vascular high risk of myocardial infarctions, cerebral vascular accidents and all-cause mortality [3] with a death rate similar to that seen in patients with coronary or cerebral vascular disease.

There are several treatment options for PAD [4,5]. Angioplasty or surgery is necessary to treat PAD causing claudicating. These procedures can improve the affected artery and increase blood flow to the affected tissues. Symptom-relief drugs such as cilostazol increase blood flow to the limbs by widening the blood vessels and increasing the thin blood, which helps improve symptoms of claudication and leg pain in PAD patients. In addition, medicines are prescribed to prevent blood clots, lower BP and cholesterol, and alleviate pain. In particular, medications to prevent blood clots are used to patients because PAD is related to a decrease in blood flow to the limbs and it’s important to improve the flow. If there is a blood clot blocking an artery, thrombolytic therapy is also selected by injecting a clot-dissolving drug into the artery. In addition to surgery and/or medications, a supervised exercise training program increases the distance patients can walk painlessly.

In spite of the treatment and intervention strategies, relative to the major advances seen in the management of other cardiovascular diseases (e.g. coronary artery disease and systolic heart failure) therapeutic options other than surgery for PAD remain currently limited [4,5]. Among them, numerous drugs have been evaluated for use in patients with claudication symptoms, but efficacy has only been reported for cilostazol and anti-platelet agents [6]. In fact, exercise training (advice to walk more often) is commonly recommended for PAD patients and supervised treadmill exercise is supported by studies [7,8]. However, the implementation of exercise into the daily lives of PAD patients is met with significant challenges (e.g. pain in the legs upon exertion). Moreover, the blood pressure (BP) response to exercise is exaggerated in PAD patients [9-12]. It is important to note that augmented BP responses during exercise are associated with higher incidence of cardiovascular disease [13]. Thus, identifying the molecular mediators that can decrease the exaggerated BP responses to exercise in PAD patients has clear clinical relevance.

Sympathetic nerve and BP responses during exercise in PAD

Figure 1: The diagram describes the neural pathway for the exercise pressor reflex and the role of the hind limb muscle ischemia. In peripheral artery disease,the responses of sympathetic nervous activity and blood pressure are amplified during exercise. Using a rat model of peripheral artery disease, a number of studies demonstrated that the protein expression of several receptors in dorsal root ganglion are unregulated and current amplitude of sensory neurons with stimulation of these receptors are increased, thereby leading to the exaggerated exercise pressor reflex.

The sympathetic nervous system is activated during exercise. This contributes to the increases in BP, heart rate (HR), myocardial contractility and peripheral vasoconstriction [14,15]. There are two basic mechanisms are thought to contribute to sympathetic engagement during exercise. The first termed “Central Command” [16], suggests that motor and sympathetic activation occur in parallel, i.e. there is a volitional signal emanating from central motor areas that leads to increased sympathetic activation during exercise. This system is linked to skeletal muscle metabolic needs via parallel brain activation of motor and autonomic centers [16]. The second termed the “Exercise Press or Reflex” [17,18] Figure 1 suggests that afferents arising from contracting skeletal muscle initiate an autonomic reflex. The metabolic stimulation (metabo receptor activation) and mechanical deformation of the muscle afferents receptive field (mechanoreceptor activation) [17]. Group IV and III afferents are thought to be predominantly metabolic sensitive and mechanically sensitive, respectively [17]. When these receptors are activated in thin fiber muscle afferent nerves, cardiovascular nuclei in the brainstem are stimulated thereby leading to increases in sympathetic nervous activity (SNA) and BP [18].

The BP rises during walking in the PAD patients are significantly greater than that seen in healthy control subjects [9,10]. Moreover, the BP response during the exercise with the “diseased” limb is greater than that during the exercise with the “non-diseased” limb [11]. Recent human studies from our institute further indicate that BP and renal vasoconstriction responses during plantar flexion exercise are accentuated in PAD [12-19]. Thus, it is believed that an exaggerated exercise presser reflex is a major determinant of why BP rises with exercise in PAD [20] (Figure 1). In addition, PAD is associated with reduced functional capacity and increased risk for cardiovascular morbidity and mortality, as well as the reduced quality of life [21]. Moreover, it has been found that the leg revascularization attenuates the augmented BP and HR in response to exercise in PAD patients, along with the greater coronary blood velocity [22]. Nonetheless, to our knowledge, studies on the SNA and BP responses to the stimulation of chemically and mechanically sensitive afferents in PAD are still lacking. Researchers have taken advantage of animal models to study human PAD and further to explore the underlying mechanisms of the exaggerated exercise pressor reflex in PAD at molecular and cellular levels.

Previous studies have shown that the SNA and BP responses to static exercise and activation of muscle metabolite receptors (i.e., TRPV1, TRPA1, P2X and ASIC3) are augmented in PAD rats [23,24]. Other muscle afferents’ receptors such as μ-opioid and thromboxane (TP) receptor are also involved in the reflex BP response to static muscle contraction in PAD [23,24]. DAMGOμ-opioid receptor stimulator significantly inhibits BP response to static contraction in PAD rats [24]. Daltroban, a TP receptor antagonist, administered into the hind limb muscles attenuates the cardiovascular responses to muscle contraction and tendon stretch in PAD rats [24]. Recent findings further indicate that blocking bradykinin B2 and PGE2 EP4, and stimulation of peripheral δ-opioid receptors can alleviate the mechanical component of the exaggerated exercise pressor reflex in PAD rats [25-27].

The primary purpose of the animal PAD model is to eliminate the blood flow in the affect limbs and therefore mimics the etiology and pathology characteristics of the PAD patients. In the last decades, the efforts have been made to enhance the ischemia degree and to extend the time length for the ischemia phase by restricting the blood supply from the collateral circulation. In this review, we summarized the features of representative animal models of PAD in addition to a rat model of PAD induced by femoral artery ligation (Table 1). There are currently several models of PAD used to study human PAD and pathophysiology of limb ischemia. In general, a surgical ligation of the femoral artery and excision is commonly used to restrict limb blood flow and to study ischemia and ischemia-induced pain in small animals such as mice and rats [28-33]. To extend injury in tissues, in the previous studies branches of the femoral artery were also ligated to exaggerate limb ischemia [31,33]. Surgical ligation of the external iliac artery and double ligation models clearly demonstrated to limit blood flow to the limbs to a greater degree [34-37]. Endovascular occlusion is also one of the most effective models to limit blood flow and it is also inducing less surgical procedure-induced injury to the external wall of the artery and the surrounding tissues. Due to its procedure technique, it is currently limited to be observed in animals such as rabbit and swine [38,39]. Interestingly, apart from inducing occlusion by performing surgical procedures, elements of FeCl2have been reported to induce thrombus in the artery and therefore theFeCl2 induced-ischemic model in rats was also developed. This model is closely related to thrombus-induced ischemia and pain under clotting conditions in PAD patients [40]. Nevertheless, various animal models are worthwhile to study the exercise pressor reflex in PAD which has numerous pathophysiological causes. It is should be noted that a simple model of artery ligation may not reflect PAD due to complicated atherosclerotic vascular disorders, but may represent of pathophysiology of limb ischemia which excludes confound effects seen commonly in experimental disease models. 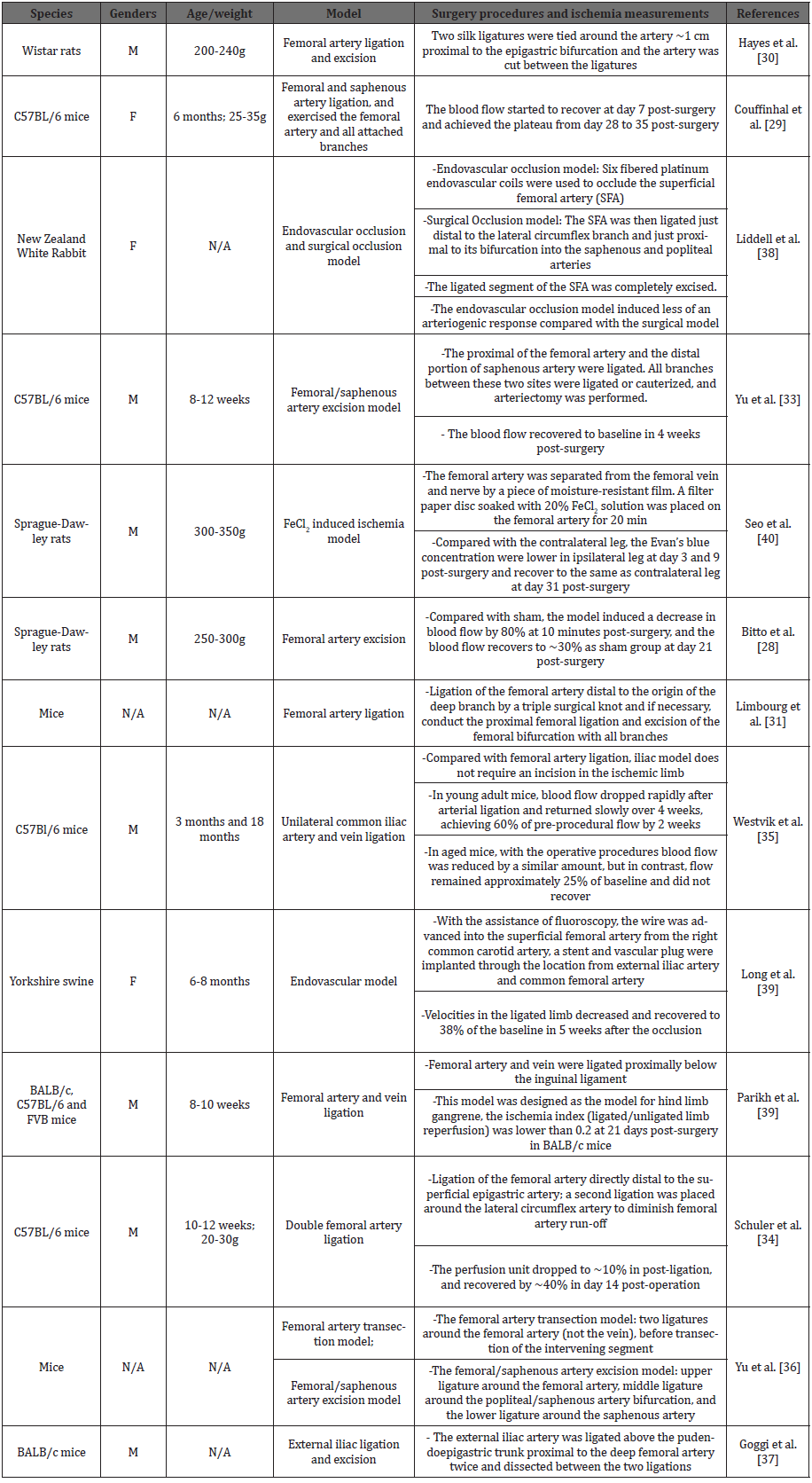 Atherosclerotic vascular disease is a main cause of PAD and intermittent claudication is the most common symptom of this disease which can be altered during exercise. A suitable exercise activity has benefits for patients with PAD [41]. However, pain and fatigue associated with the disease restrict exercise. Moreover, amplified BP response and reduced muscle blood flow controlled by SNA during exercise in PAD patients increases the risks for other cardiovascular diseases. Using a rat model of PAD, we have explored the role of metabolite sensitive receptors on muscle afferent nerves in regulating the sympathetic and pressor responses in PAD. Whereas this PAD rat model is primarily based on limiting limb blood flow; it has limitations to reflect complex of this disease in pathophysiology because of atherosclerotic vascular disorders of PAD. Therefore, experimental strategies need to be addressed in the future by 1) performing the similar studies using different animal model of PAD or a combination of multiple models, 2) performing the similar experiments in conscious animals corresponding to humans, and 3) examining the effect of certain interventions alleviating the exaggerated exercise pressor reflex function and further improving the claudication and/or exercise incapacity in PAD. Nevertheless, in the future animal models of more representative human PAD are desired to be developed.