Purpose: Sarcopenic patients have reduced musculoskeletal capacity and have poorer post- surgical outcomes. High rates of sarcopenia have been reported among Western liver transplantation candidates. The purpose of this study was to determine the incidence of sarcopenia in an Israeli liver transplant program and assess its effect on post-transplant outcomes.

Methods: An observational retrospective study was performed using an updated database which included demographic and outcome measures of 100 consecutive liver transplant patients from deceased donors at the Hadassah Medical Center 2002-2012. Sarcopenia was assessed for those with available pre transplant abdominal CT studies. Psoas muscle measurements were obtained via CT and Lean Psoas Area (LPA) was calculated. Subjects were classified into sarcopenic according to an accepted convention of psoas LPA.

Medicine’s musculoskeletal focus has centered for many decades on the epidemiology, prevention and the associated adverse effects of osteoporosis [1]. It is only more recently that sarcopenia has been acknowledged to be a major musculoskeletal problem and to also be part of the equation of fracture risk [2].

The presence of sarcopenia has been assessed by calculations derived from either DEXA scans, CT scans, bioelectric impedance measurements, or grip strength and walking speed [6]. What is sarcopenia and what is normal muscle mass is defined for each of the assessment methods, but values often differ between populations. The European Working Group on Sarcopenia in Older People (EWGSOP) has published criteria for sarcopenia for the European population [7]. Because of differences in their physique, different criteria have been published for the Asian population [8]. In some studies sarcopenia has been defined based on the measured value being one standard deviation below the average for the study population. All of this can make comparison of research results between clinical studies problematic.

The current report compares the sarcopenia incidence among Israeli adult liver transplant patients with those from major North American centers. The transplantation outcomes for the Israeli cohort are presented for those with and without sarcopenia.

The data of 100 successive liver transplant recipients in the Hadassah Medical Center liver transplantation database between 2002-2012 were reviewed. The period was chosen to allow for sufficient long-term follow up to address study endpoints and outcomes. The database includes the reason for transplant, gender, age, height, weight, BMI, MELD (model for end stage liver disease) and psychosocial scoring at transplant [10]. Also listed are the dates of clinic visits, comorbidity and mortality data including death date, rejection, biliary complications, nephrotic complications, infection, hyperkalemia and diabetes. All patients from this cohort who were older than 18 years at transplantation, underwent a first-time liver transplant from a deceased donor and had abdominal CT studies with sagittal reconstruction within the 25 months prior to transplant, were available for sarcopenia assessments. The rate of sarcopenia of the present cohort was compared to that of published American, [9] and Canadian [6] studies.

The presence and absence of sarcopenia was defined for male subjects and female subjects separately according to the staturenormalized lean psoas area cutoff point of 1480.4 mm2 for males and 974.8mm2 for females [9]. These values were determined by Dolgin et al. [8] based on the Michigan Surgical Quality Collaborative database of 1,279 patients who underwent elective surgery at a single institution and had CT based LPA calculations [11]. The cut off point for sarcopenia was determined as one standard deviation below the average of lean psoas area.

34 patients had CT studies appropriate for the sarcopenia analysis. Nine were females and 25 males. Based on the Dolgin’s criteria [9] for determining sarcopenia based on lean psosas area measured on CTs, only four patients (12%), all males, had sarcopenia.

Table 1:The relationship between sarcopenia and patient demographics and transplantation outcomes. 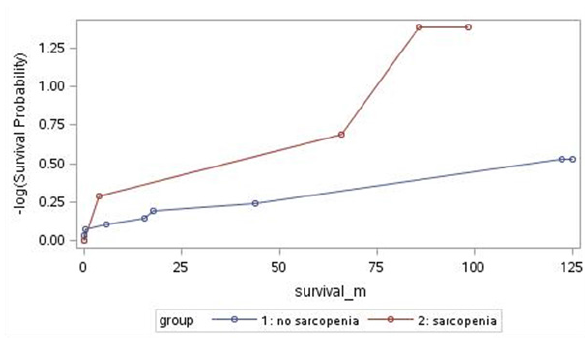 Sarcopenia should not be confused with cachexia. Cachexia has been defined as a multifactorial syndrome with muscle, fat and general weight loss coupled with increased protein catabolism secondary to underlying disease. Sarcopenia is only the loss of muscle mass. The diagnostic criteria for sarcopenia in liver disease patients are either CT psoas muscle mass calculations such as used in this study, bioelectrical impedance analysis or simple grip strength measurements. For any given evaluation method, the sarcopenia cutoff value has been alternately defined as a value either one or two standard deviations from the mean value of a reference group [14]. The reference groups used also vary between studies [4,6-9,13,14]. It would appear that the Israeli incidence of sarcopenia in liver transplant patients in addition to being lower than North American counterparts, is also much lower than the Japanese. The Japan Society of Hepatology has published guidelines for sarcopenia in liver disease [13]. They report the incidence of sarcopenia in Japanese cirrhosis patients to be in the range of 10%-70%. They also found that among patients undergoing liver transplantation, sarcopenia is associated with poor post-transplant prognosis. In all of these assessments the Japanese cutoff values for sarcopenia are lower than those of the values used in Europe [7]. For muscle mass calculations the cut-off values are 4-6% less.

This study is limited in that it is retrospective in nature, based on small numbers when compared with North American Studies and only 34 patients had CT studies of sufficient quality to make the sarcopenia analysis. The statistical finding of lower post-transplant survival among sarcopenic patients, requires further continued study. Nevertheless, the finding of a low incidence of sarcopenia in the Israeli transplant population is an important because it potentially makes it a relevant transplantation screening tool in Israel. A high prevalence of sarcopenia, such as has been reported in North America, would potentially affect transplantation decisions in 50% of patients, making its filtering effect too coarse to be useful for that population. A major difference between Israeli and North American transplant patients is in the etiology of their liver disease. In 24% of US transplant patients [9] and 19% of Canadian patients5 the etiology is alcoholic hepatitis. In this study there was only one patient who suffered from alcoholic hepatitis (2.9%). The composition of the population needing liver transplant is likely to changed in the future. Because of improved antiviral treatment, the incidence of viral hepatitis patients can be expected to decrease. On the other hand, because of the increasing incidence of obesity, the number of non-alcoholic fatty liver disease (NASH) patients can be expected to increase.

Given the possible mismatch between need and supply, this study indicates that sarcopenia might be a factor to consider when determining the list order in liver transplantation programs. During the COVID-19 pandemic this mismatch is likely to become more prevalent.

The authors wish to acknowledge the contributions of Yusef Asraq, Mohamad Masarowah and Hadar Merhav to the study. The study was supported by internal funding from the Hadassah Medical Center.

None of the authors has a conflict of interest in this work.