Bell’s Palsy: A Narrative Account of the Illness, and A Short Presentation of the Disease

A detailed personal account of the illness and earlier narrative accounts by physicians, outline their impact on the current evidence-based knowledge of the disease.

Bell’s palsy [BP] is a rather common ailment, covered by an extensive literature, in the past decades imbued with the evidencebased medicine, with exclusive reference to diseases. The current revival of narrative medicine [1,2] encourages a reconsideration of the illnesses. Our aim is to join and reconcile the two approaches. Hemifacial paresis had been observed and described since the antiquity [3] but is currently named after Sir Charles Bell (1774– 1842) because he was the first to interpret it on solid neuroanatomical grounds [4,5]. He published the narrative account of the illness in a letter from one of his correspondents [6] and might have suffered it himself [3,7,8]. What generally happens is that BP is the prima facie (literally) diagnosis for hemifacial, or peripheral seventh cranial nerve, paralysis.

For the illness: the subjective personal account, by the senior author, a non-clinical M.D., and several accounts from the earlier literature. For the disease, a short presentation of the disease.

Personal account by P. Urbano: On the morning of January 3, I first noticed a difficulty with the

mouth wash, after tooth brushing, with the liquid drooling out of the mouth. A look at the mirror revealed that the left half of the face was flaccid and paralyzed: fewer wrinkles on the forehead, eye and mouth slanted, flattened nasolabial fold. Trying to change the mimic the asymmetry increased considerably, with no movements at all on the left.

Recalling the anatomy, I had studied over 60 years earlier, I realized I had a paralysis of the left facial nerve (7th cranial), and I made the tentative diagnosis of BP. I am 80 years old, but in my 45 years of professional life I had seen no cases of it, as I spent it doing basic research and teaching; I was surprised to see how much the look of a resting face depends on the tonus of the mimic muscles, and I regretted not having pointed it out when lecturing on tetanus or botulism.

In addition to the above, I had a slight tenderness behind the left ear; in fact, I had already had it for 3 or 4 days, when I also noticed several raised stubbles on the left cheek, as if the hair bulbs were protruding. The latter were cut by the electric shaver, leaving four or five red, non-bleeding spots.

On the same first day, I was prescribed, and I started following, a 6-day course of therapy with Vitamin B12, Prednisone, Acyclovir. I also started using the webcam to record still and video images of my face [9].

A disfigured face may psychologically ruin the quality of life in a teenager, a top model or a young lady, but not in my case; first, I was aware that in most cases the situation would revert to normal; second, at my age the look of the face is of minor importance, even for social interactions. So, I’ll not focus on the appearance, but on the substance of small muscles not working properly.

Initially, the main problem was with the paralyzed lips, which rested close to the teeth, and when chewing tended to close inwards, causing very painful bites to the internal mucosa; I had to exert the utmost care to avoid them, even helping with the fingers. The problem subsided gradually, with the return of some tonus. Of lesser concern was a mild speech disturbance with the labial consonants, which also resolved in a couple of weeks. After several weeks I could blow out a candle, but still not inflate a balloon.

The other problem was with the eye, which I could not close and would not blink normally, resulting in discomfort and tearing; an eye drop containing sodium hyaluronate was tried and immediately dismissed, as it blurred the vision. Sleep was not interfered with or affected, as the eye would stay shut after I gently closed the eyelids with the fingers.

On the third week I started to notice a very gradual decrease of the symptoms. Reading and watching TV or working with the notebook was and still is straining on both eyes.

I concluded that the palsy had been heralded by a herpetic sycosis (HSV folliculitis), or by a former fruste of herpes zoster.

Three dissertations [10-12] helped us to trace previous narrative accounts of the illness. Of course, we had to search for the old names by which the condition was known, in Latin, the language then adopted for science publications: oris tortura; further we had to distinguish the paralytic form from the spastic or convulsive one [13]. 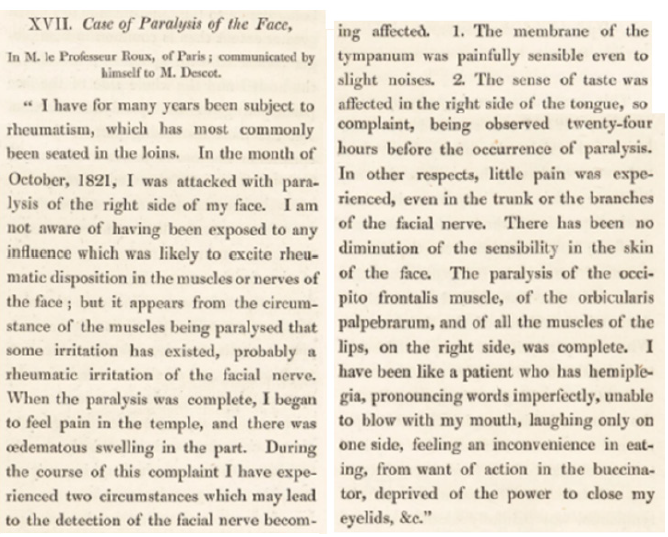 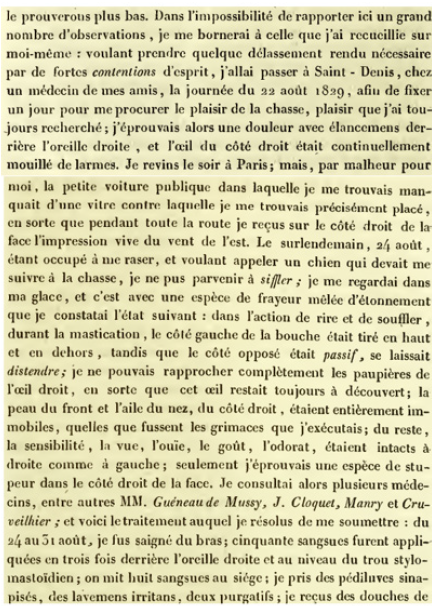 A physician’s personal account of the illness, and of its cure, was significant for Bell to understand the disease [6] (Figure 2), another became the showpiece of Montault’s dissertation [11] (Figure 3).

A cursory review of digital accounts of BP in blogs and social media found a great amount of material, roughly ascribable to three categories: promotion of professional services or of diverse treatments; gossipy reports of cases affecting famous people; personal narratives by patients. We examined several of the latter, finding that almost all were YouTube videos, mostly from the U.S.A; we found examples for maintaining relationships with others, others of self-management, many for visualizing disease [24].

BP is the usual diagnosis for the unilateral paresis or paralysis of the 7th cranial nerve; it is coded as G51.0 in the 10th International Classification of Diseases [25]; this, or the corresponding previous ICD codes, are used to count the cases in order to estimate incidence and prevalence ratios. The former was mostly reported to be 11 to 40 per 100.000 per year [26]; it exceeded this range in Rome [27], where it was estimated to be 53.3/100.000/year, and in Sicily, where in was 52.8. [28].

It is estimated that 1 in 60 persons experience this palsy in their lifetime; a most alarming symptom, as up to three quarters of affected patients think they have had a stroke or have an intracranial tumor [29].

The disease and its natural course are well described in a large prospective study [30], and effectively summarized in reference treatises [31,32]. Much attention has been given to the grading of palsy and of its evolution, and several scales have been proposed both for recording the effects of treatments [33,34] and for predicting the outcome [35,36].

For the practical management of BP, it is advisable to refer to DynaMed Plus [37], a constantly updated platform that gives an overview of the disease, and graded evidence-based recommendations for its diagnosis, prognosis, and treatment. From it we learn that usually the diagnosis should be clinical, as many of the available diagnostic tests are of questionable benefit. Regarding therapy, the value of the various treatments is difficult to assess, because most of the cases recover spontaneously. Of the many proposed treatments, high-quality evidence has been reached for early corticosteroids increasing the rate of complete recovery [38,39]. Antivirals alone did not improve the rate of complete recovery but may benefit patients taking corticosteroids [40,41].

Given the incidence of BP, it is expected that it may follow any intervention; the problem arises when it follows an immunization, when it is recorded as an adverse event, and it matters for insurance compensation [42].

The literature on BP suffers for a certain degree of semantic confusion. An accurate clinical diagnosis will distinguish the primary cases from the obvious secondary ones. If BP is defined as an acute, peripheral, unilateral, idiopathic, non-recurrent facial palsy [43] then all the cases described by Sir Charles Bell should be excluded; to be excluded also the cases narrated by previous authors, who considered it a frigore, or ‘rheumatic’ [22&6].

BP probably describes a heterogeneous clinical entity accounting for variations in presentation. Causality has remained difficult to establish, in part owing to variations in how BP is defined by the investigators, but reactivation of latent HHV [HSV-1, VZV, EBV and HHV-6] within the geniculate ganglion may precipitate a final common pathway of inflammation, edema and ischemia of the facial nerve [43,44]. It is known that reactivation from latency may follow a large series of nonspecific stressors.

Both HSV and HZV usually establish latency in peripheral sensory ganglia [44], but they have also been found in the geniculate ganglion of the seventh cranial nerve, which has prevailing motor fibres [45-51].

Advanced diagnostic methods might identify the proximal cause among the many suggested, but they are warranted only for research purposes, or for single cases, like the ones considered adverse events following immunization.

Most of the patient’s narrative accounts of their illness never reach the scientific literature. When they do, they are filtered by the authors, through their knowledge of the disease. Physician’s personal accounts of the illness are rare and reflect their acquaintance with the current views on the disease, as seen in the case of BP.

PU the narrative of the illness; FU presentation of the disease. Authors contributed equally to the discussion.