Mitochondria are subcellular organelles that are the power-house of the cell. However, we now see that they play an ever-growing role in health, disease and aging of the skin. Not only does thee mitochondria produce the most reactive oxygen species (ROS) in the cell, but it affects major inflammatory and dysplastic processes. We have reviewed the literature of mitochondrial dysfunction and ocular surface disease. We have presented syndromes and non-syndromic conditions where mitochondrial dysfunction affects ocular surface health and dry eye, dry keratoconjunctivitis. 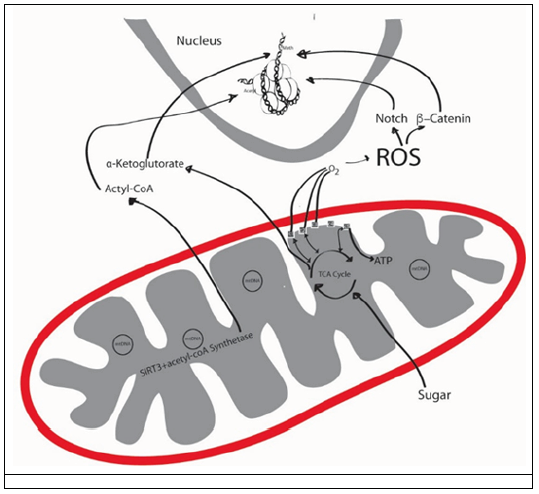 Figure 1: The productions of reactive oxygen species (ROS) by mitochondria, and the interplay of mitochondria with the nuclear DNA.

Mitochondria are sub-cellular organelles with DNA. Mitochondrial DNA (mt DNA) is normally present at thousands of copies per cell and is packaged into several hundred higher-order structures termed nucleoids and makes only 13 proteins, a noncoding regulatory D-Loop, 2rRNA and 22 tRNAs, including genes for 13 oxidative phosphorylation (OXPHOS) polypeptides, 22 tRNAs and two ribosomal RNAs, while some of the OXPHOS elements are encoded by nuclear DNA [2]. The function of mitochondria is energy (ATP) formation, heme synthesis, calcium homeostasis, cell signaling, cellular differentiation, cell death, cell cycling, and cellular growth [3]. Here we go deeper into the function and dysfunction of the mitochondria and the ramifications it has on the ocular surface (Figure 1).

Through OXPHOS, mitochondria use breakdowns of proteins, fatty acids and sugars to generate ATP with ATP synthase, using c5 (Figure 1). Mitochondria are thought to be of bacterial origin and mitochondrial function is driven by mitochondrial DNA, Cellular nuclear DNA [4] and epigenetic phenomenon [5]. C1, which is made up of 44 subunits, 37 of which is encoded by nuclear DNA and the rest by mt DNA [6]. However, most c1 mutations have been associated with mt DNA, rather than nuclear DNA, and could be further causing some of the mt DNA mutations [7]. In these processes, many factors that affect tissue aging and dysfunction are influenced.

Reactive oxygen species (ROS) are formed in the respiratory chain that normally occurs in the inner mitochondrial membrane, where five multi-molecular electrochemical generators create a gradient that converts adenosine diphosphate (ADP) to adenosine triphosphate (ATP) due to a dysfunctional mitochondrial oxidative phosphorylation (OXPHOS) [8]. C1 and C3 are the main producers of ROS [8]. Mitochondria are the man producers of ROS. One difference between nuclear and mt DNA, is that mitochondria lack histones, making mt DNA very susceptible to damage from ultraviolet (UV) rays and ROS [9]. These oxidants might cause a decrease in the electron transport chain (ETC) enzyme activity, impaired cellular respiration, nuclear DNA mutations and tissue damage [10].

The other component of the mitochondria is the sirtuin family, specifically sirtuin 3 (SIRT3) [11]. SIRT3 activates acetyl-coA synthetase, which forms Acetyl-coA, which works on nuclear DNA. SIRT3 resides in the matrix of the mitochondria and mice lacking SIRT3 develop cancer [12]. SIRT3 has been shown to protect tissue from ROS [13].

A balance between the ROS, protective mechanisms from ROS in times of infection, and ultimately mitophagy equal the overall cellular and tissue health (Figure 2). 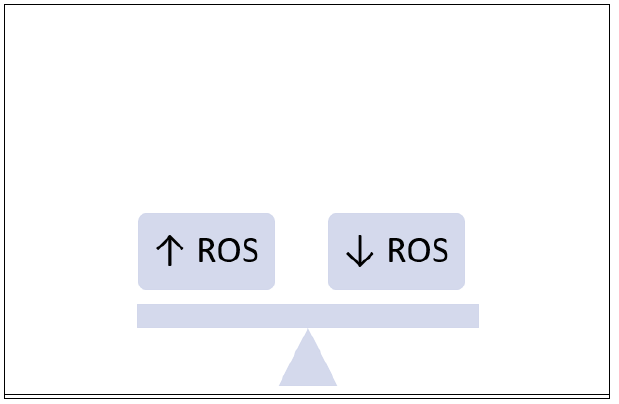 Figure 2: The balance of the right amount of reactive oxygen species (ROS) is the function of healthy mitochondria.

One mechanism of mitochondrial dysfunction is a disruption of mitophagy. Mitophagy is regulated by mechanistic target of rapamycin complex 1 (mTORC1) [15], which has numerous blockers, like rapamycin. Rapamycin can induce mitophagy [16]. In Parkinson’s disease, two proteins are known to promote mitophagy in dysfunctional mitochondria: PARKIN and PINK1 [17]. Mutations in PARKIN and PINK1 can lead to an accumulation of dysfunctional mitochondria, an increase in ROS, and Parkinson’s disease.

The epigenetic phenomenon is a nuclear phenomenon, encompassing methylation, micr-RNA (non-coding), sRNAs (noncoding), histone modifications, etc. However, there is mounting evidence that this genomic epigenetics cross-talk with mtDNA (Figure 1). Due to the above described vulnerability of mtDNA, it is logical that mtDNA is accessible for cross-talk. Reversely, mitochondrial depletion has been associated with altered DNA methylation profiles of certain human nuclear genes. Mitochondrial depletion could down-regulate nuclear DNA repair resulting in DNA damage that is converted into mutations by error-prone repair polymerases.

The role of antibiotics in mitochondrial dysfunction

The role of ultraviolet (UV) light in mitochondrial dysfunction

The number one environmental cause of aging is UV irradiation from the sun. Mitochondria are especially susceptible to this damage [20]. With aging, the enzymatic activity of mitochondria decreases and there is an increase in mtDNA mutations [21]. mtDNA have a 50-fold greater mutation rate than nuclear DNA [22]. In humans, it is thought that large-scale deletion of mtDNA, and not point mutations, are involved in UV-induced photoaging [23]. This large-scale mtDNA deletion, or as it is become to be known as the “common deletion” does not correlate with chronological age and seems to be UV specific [24]. When human mtDNA mutations are followed over years, the mutations can increase by 32 folds, even without further UV irradiation. Heat also causes mtDNA damage. Infrared (IR) irradiation causes point mutations in mtDNA in a different deleterious mechanism than UVA or UVB [25]. This is thought to cause a “defective power house” model of premature aging, where there is altered collagen production by fibroblasts, neovascularization and inflammation [10].

The role of mitochondrial dysfunction in uncontrolled growth of tissue

Mitochondria have a role in uncontrolled growth of tissue. For example, tumors are in desperate need of energy and macromolecules, so it is not surprising that mitochondria are important to tumor growth. Mitochondrial dysfunction is intimately involved in skin cancers. Incidence of mtDNA mutations in melanoma and head and neck squamous cell carcinoma has been shown to affect every mitochondrial gene [26]. Keratinocyte differentiation and propagation by Notch and β-catenin signals are regulated by ROS. Their signaling pathway is also important in skin appendageal development and tumorigenesis [27]. For example, mitochondria are rich in basal cell carcinomas [28], However, ubiquinone, which is important in tagging cells for authophagy, is consistently downregulated in basal cell carcinomas [29]. Oncocytomas, which are growths associated with Birt-Hogg-Dube syndrome and Cowden Syndrome, are associated with mutations in c1 [30].

The ROS activates a complex structure called the inflammasome. The Inflammasome regulates caspase-1-dependent secretion of IL-1; this process promotes skin cancer formation [31]. The most common BRAF mutation in melanoma induces dysfunctional OXPHOS, and primary and metastatic melanomas have higher expression of OXPHOS than nevi [32]. Mitophagy may have a role in melanoma progression [33]. Therefore, dysfunction in mitochondria is associated with some skin cancers and syndromes associated with internal malignancies.

The role of mitochondria on the ocular surface

ROS is elevated in dry eye syndromes [34]. Numerous factors can cause an elevation of ROS, but mitochondria are the number one producers of ROS in humans, especially as the mitochondria becomes less functional [35]. For example, dry eye has a reduction of lacritin, a tear glycoprotein needed to induce autophagy in situations of inflammation [36]. The reduction of lacritin in dry eye creates a vicious cycle of inflammatory cells creating greater ocular surface damage (Table 1) [37]. 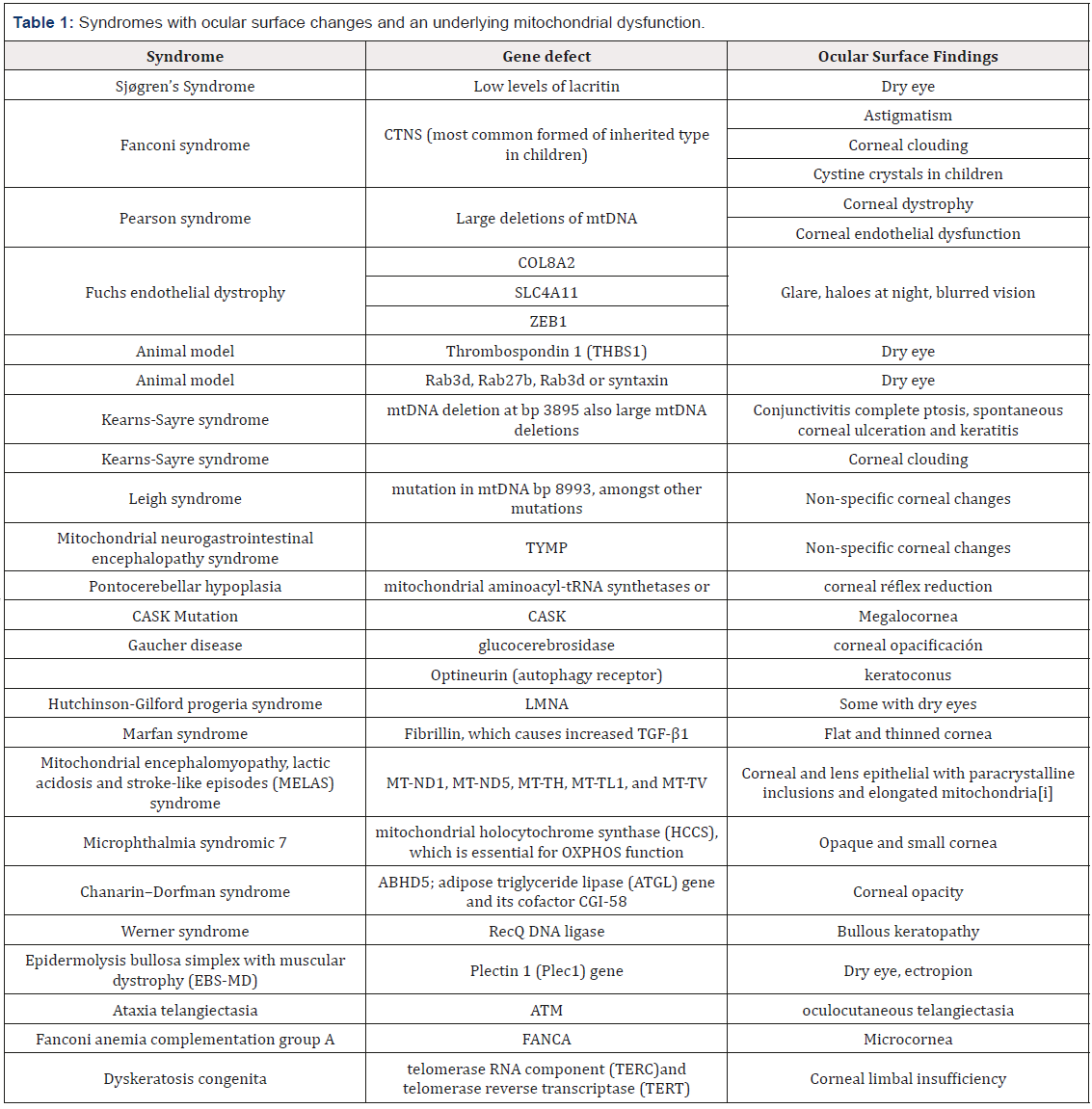 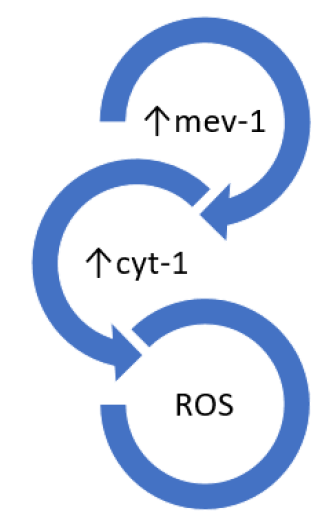 Figure 3: In the mev-1 animal model, the c-2 complex is compromised, leading to increased ROS production. These mice have lachrymal glad dysfunction and subsequent dry eye.

In a Tet-mev-1 mouse model of dry eye, mev-1 is conditionally expressed, and mitochondrial dysfunction in the lacrimal glands reduced tear production and increased ROS production. Mev- 1 produces Cyt-1, which is part of C2 of mitochondria OXPHOS. This has been shown to increase ROS, ocular surface damage, and decreased tear function (Figure 3) [49].

In another animal model, SIRT1, which is a component of mitochondria, was downregulated, and this resulted in tear abnormalities, increased corneal fluorescein staining and ultimately dry eye disease [50].

In another animal model, rats underwent low humidity to induce dry eye, and were followed by stress markers Rab3d, Rab27b, Rab3d and syntaxin [51]. However, if the rats were placed on a calorie-restricted diet, which causes mitophagy [52], they had improved lacrimal function and healthier tear composition using the phenol red thread test post carbachol stimulation [53].

A clinical study of 20 patients revealed that keratoconus was due to ROS from mitochondrial dysfunction in C1 [56]. When blink-suppressed dry eye is induced, a direct relationship to ROS is identified [57], causing surface inflammation [58], and decreased antioxidant enzymes [59]. Conjunctivitis complete ptosis, spontaneous corneal ulceration and keratitis has been reported in Kearns-Sayre syndrome [60], which is known to have mitochondrial DNA deletions [61]. Those having mtDNA deletion at bp 3895 had the greatest deletion load in the cornea [62]. Furthermore, endothelial or Descemet membrane abnormalities have caused corneal clouding in Kearns-Sayre syndrome [63]. Leigh syndrome, that can cause non-specific corneal changes, was documented to have abnormal appearing mitochondria and mutation in mtDNA bp 8993 [64]. Other syndromes with mitochondrial dysfunction have shown ocular pathology. Mitochondrial neurogastrointestinal encephalopathy syndrome have shown nonspecific corneal changes [65]. Pontocerebellar hypoplasia can have mitochondrial aminoacyl-tRNA synthetases mutations [66].

In Gaucher disease, with mutation of glucocerebrosidase, result in corneal opacification [67] and mitochondrial dysfunction [68]. Optineurin is yet another important element for mitophagy. Abnormal optineurin expression has been documented in keratoconus formation [69]. TGF-β1 has been shown to induce mitochondrial dysfunction and in pro-fibrotic conditions, mitochondrial health is in disarray [70]. In Marfan syndrome, a defective fibrilin causes increased levels of TGF-β1, and symptoms, such as flattened and thinned cornea can be seen.

The role of anti-oxidants in ocular surface health

SkQ1 is an anti-oxidant that is mitochondria specific. When SkQ1, is applied to the eyes in a rabbit model, ROS production is prevented, TNF-α and IL-6 is downregulated and IL-10 is upregulated. Corneal apoptosis is hence reduced. Furthermore [71]. Resveratrol, which can induce mitophagy [72], has been shown to protect corneal epithelium from cytotoxic agents [73]. Polyunsaturated fatty acid in an animal model altered corneal neovascularization [74], but other studies have failed to reproduce the findings [75]. However, rapamycin, which regulated mitophagy, has shown to extend the survival of corneal cells in culture [76], and reduced scarring after keratectomy [77]. In vitro, rapamycin increased the colony forming efficiency of corneal cells [78] and reduced corneal cell senescence [79]. Ceramides are essential to corneal health [80], and their presence induce mitophagy and even tumor suppression [81].