Hides and skins need treatment to be leather, this treatment processing pass from soaking to retainage which require chemicals including preservatives, salt, lime, sodium sulphide, ammonium sulphate, bating materials, acids and alkalis. These chemicals and proteins are much polluted and need to be treated to protect the environment however the treatment is not efficient and considerable amount of chemicals and water are drained. On the other hand the recycling method save chemicals, water, protects the environment and that no waste treatment plant is needed, the study was done in National Leather Technology Center, Sudan where ten trials were carried out for recycling, for each process from soaking, liming to tanning as show in tables, This reduces the cost of the product and gives more protection to the environment. So, it is recommended that the method of recycling is to be generalized to all tanneries.

Leather tannage has emerged as an important economic activity in several developing countries and as a result of increased awareness of environmental problems, environmental protection has become a global issue in recent years. Currently the leather processing industry is going through a phase change due to global environmental regulations. The pretannage and tannage revealed that pretanning and tanning processes contribute 80–90% of the total pollution load (BOD5, COD, TS, TDS, Cr+3, S2−, sludge, etc.). Further, toxic gases like ammonia and hydrogen sulfide are also emitted. Volatile organic compounds, heavy metals, and carcinogenic aryl-amines from post-tanning and finishing operations are also creating severe concern. [1] Where the pollution load of untreated lime-sulphide effluent (S2−, Ca(OH)2, COD, TS) content is 588, 2960, 31010 and 32160 ppm respectively [2]. In this context the wastewater resulting from tanning processes contains high amount of chromium metal which is harmful for the environment and human health. Tanning is the chemical process that converts animal hides and skins into stable and imputrescible products called leather [3]. While that Buljan & Kral [4] reported that it is a vital industrial process to produce leather from raw hides and skins. Yet, the process gives a problem to the environment. The transformation of hides into leather is usually done by means of tanning agents and the process generates highly turbid, colored and foul-smelling effluent [4]. More than 600 kg of solid waste is generated during the transformation of leather where present in the constituent of solid wastes are fleshing, fats, solid hair debris, trimmings, shavings and leather cuttings [5]. An additional source of solid waste is the sludge from the effluent treatment plant whereas the solid waste generated from processing one tone (equaling 1,000 kilograms) of raw hides using the conventional processing techniques is approximately 70kg, with the largest quantity being generated from beam house operations, [6] of world tanneries, 80- 90% use chromium (III) salts in their tanning processes. The degree of toxicity of chrome is perhaps one of the most debated issues between the tanning industry and authorities [7]. Chromium salts which are not fixed to the collagen during the tanning process are discharged as effluents to the environment, notably water and the ground. Water - It has been estimated that, with traditional tanning methods, from 4 to 9.5 kg of chromium (calculated as Cr2O3) per ton of skins are not chemically fixed during processing if it is not carried out with a suitable high exhaustion tanning system [8]. Therefore, chromium from leather tanning can make its way into air, soil, food, and water, and the most common forms of exposure are through inhalation of dust or fumes and ingestion of or contact with contaminated water. Workers in tanning facilities can inhale airborne chromium and can also be exposed through dermal contact Wastewater and solid waste from tanning operations often find their way into surface water, where toxins are carried downstream and contaminate water used for bathing, contaminate cooking, swimming, and irrigation. Chromium waste also seeps into the soil and groundwater systems that provide drinking water for nearby communities. Therefore, the objective of this study is to recycle wet processes from soaking through retaining and to check the quality of the leather made through recycling to that produced by the conventional methods.

The goat pelts were obtained from warehouse in Omdurman, Khartoum. Sudan. Reagents used for the experiment and analysis were of analytical grade.

Green goat skins have been used for pre-tanning are shown in (Table 1) as a control leather, and amount of water, sodium sulphide and calcium hydroxide used for the pre-tanning trials has been 150%, 3% and 6% respectively, the obtained pelts were prepared to re-lime stage. The drum content was discharged in the saving container and filtered then pumped again into drum and the process was continued subsequently then water sodium sulphide and lime in filtered liquor were measured and then bath corrected to 150%, 3% and 6% based on weight of soaking pelts respectively. The experiment was repeated 9 times using remained filtered unhairing liquor from the previous trial each time according to percentage declared in (Table 2). The experiments of pre-tannage were continued according to the method mentioned in (Table 3) using produced unhairing pelts to produce chrome tanned leathers. 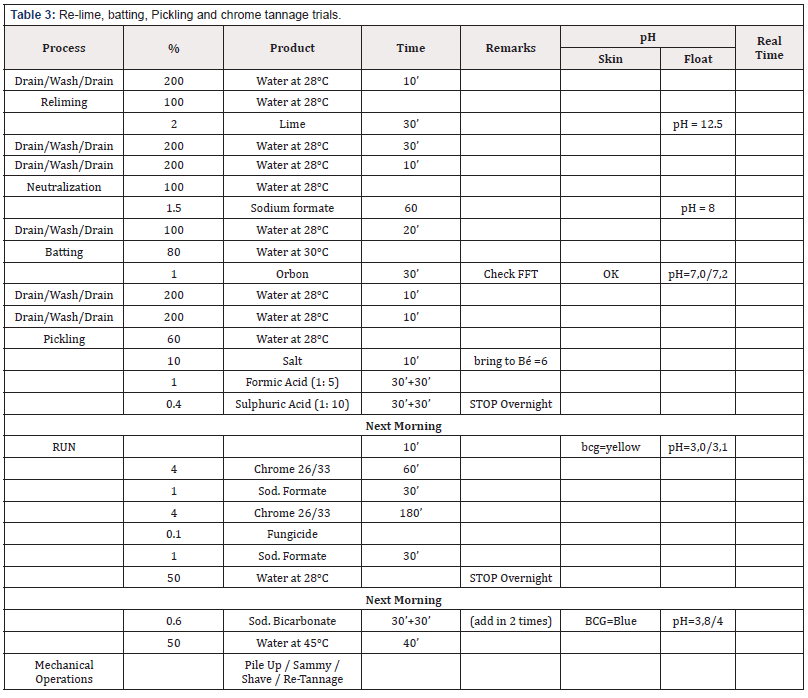 The experiment was repeated 9 time using remained chroming liquor from the previous trial each time according to percentage declared in Table 4.

The method was continued using the chrome tanned leather using post tannage method mentioned in table 5; and the produced leathers were stored to mechanical and physic-chemical tests.

The mechanical properties of leathe

Both of experimental trials were separately run for recycling lime-unhairing and chrome liquors for 10 times, in each case the residuals were filtered and then calculated water, lime, sodium sulphide and chrome, and each run was topped with the required make up according to Tables 2 & 4 which illustrate the percent of chemicals components contribution in the trials.

To avoid fat builds in lime liquors which practice proved to be a problem as it may cause greasy leather or adhere to the drum and be difficult to remove. Thus, used of green-fleshed skins and/or surfactants may overcome the problem and/or stopped recycling repeated after 10 times and/or removed it mechanically or established new recycling trial.

Tables 3 & 5 explain that by increasing the recycling times number observed that the average of water consumption per kilogram was reduced. Since that consumption was reduced to 82% therefore the wastewater production also was reduced to about 18% and contribution of other chemicals components such as sulphide, lime and chrome, 52.5, 18.9 and 62% respectively in the total load of waste water.

This means that the recycle have an impact on the local level especially that methods of waste water treatment requires a treatment plant, chemicals, and laborers and mentalist. This increases the cost and so reduced the profit. This guided us think of used recycling, a process which saves chemicals, water, and protect the environment.

The results explain that the chemical oxygen demand is a measure of the chemical reducing power of effluent and hence its ability to destroy potential oxygen content of water. The results indicated that throughout recycling trials, COD levels were nonconforming to that calculated of traditional tanned waste water. This value is also high relative to the results measured. This pointed to repeated of processes that generate COD were early stages such as liming (which dissolves the skins’ epidermis and material that cements skin fibers together) and the degreasing and dry-cleaning processes to remove fats and greasy materials.

The solids waste generation is an inherent part of leather processing wherefore the low levels of skill in the flaying and fleshing of skins operation and repeated of utilized un-hair liquor for 10 times may cause an increasing of total suspended solid in the effluent compared to that measure of unhairing liquor which was discharged directly, though, the levels of pollution of the collected waste water had improved which was pegged to the numbers of trials and amount of total suspended solids which was assisted after 10 recycling.

Sulphides constitute one of the most dangerous pollutants whereas the major contributor to sulphide pollution is unhairing operation, which uses sodium sulphide. Processes that generate sulphate in their waste liquors also contribute to sulphide pollution also oxygen deficient waters, sulphate are reduced to sulphide, whereas the sulphate are generated by three stages namely de-lime, pickle and tannage therefore the de-lime stage uses ammonium sulphate, the pickle stage uses sulphuric acid and trials the tannage stage uses chrome sulphate. In both recipes’ sodium format was utilized as alternative to ammonium sulphate in the de-liming stage to reduce the sulfates content in the effluent. The results indicated that throughout recycling, sulphide levels were decreased to almost ten times of that calculated of traditional tanned waste water.

The results were highly impressive, where it was known that when chrome bearing were recycle where the calculated parameters illustrated that the chrome content was reduced to minimum level compared to traditional method in which discharged the tannins liquor directly after chrome fixation, this may attribute technically to their high exhaustion and the rigorous process control which optimizes chromium uptake in the skin, and so environmentally, chrome is of more concern so applied saving and recycling of tanning liquors represented rigorous method of effluent treated. Therefore, applied separate treatment of chrome streams is necessary for limiting its content in waste water, even in those tanneries achieving high exhaustion.

Table 7:the mechanical properties for both controlled and recycled leathers.

There was no significant difference in a real yield or tensile strength, elongation and shrinkage temperature tests: because there were no differences in break loads at grain and thermal stability.

I. Chemical and water can be saved through recycling.

II. The environment will be protected from the polluted chemicals.

III. The quality of the leather produced is satisfactory as compared with the standard specifications.

a) The recycling method from soaking through retannage is recommended.

b) The method of recycling must be generalized to all tanneries as it saves chemicals, water, protects the environment and there is no need to construct a waste water treatment plant.