Introduction: Halitosis is the highly public health concern and about female are commonly affect this problem. A steroid sex hormone that acts as an important role in maintaining of oral physiology. The menstrual cycle pointed as a constituent that causes halitosis. The prevalence rate of halitosis during menstrual cycle unknown and various sociodemo graphic factors associated to the halitosis.

Objective: The purpose of the survey was to get out the sociodemographic factors that cause halitosis during the menstrual phase.

Methods: This study was cross-sectional survey, covering in Dhaka district of Bangladesh and data collecting period February 2017 to January 2018. The menstruation is 28 days between the days menstrual phase-1-4, follicular phase-7-11 and premenstrual phase-24-27 days. Anxiety score measured by using the Beck Anxiety Inventory (BAI) questionnaire. Factors of halitosis during menstrual cycle risk measured by cross-tabulation and ordinal logistic regression were used to examine the association between sociodemo graphic factors halitosis during menstrual cycle.

Conclusion: This work confirmed the demographic factors were exacerbated oral halitosis during the menstrual phase.

Halitosis defined as an unpleasant mouth odor due to some intra oral and extra oral causes [1]. It has a significant impact on the person’s normal social life. Now it was considering as a public health problem because many people suffering from halitosis [2,3] About 31% of American adults suffering from chronic or recurrent halitosis and almost 45% Indian dental student reported halitosis [4]. There are many extra-oral and intraoral factors causes halitosis such as periodontitis, gingival bleeding, tongue coating, oral ulcer, dental caries, respiratory disturbance such as sinusitis, nasal discharge, carcinoma of lung, infection and various systemic diseases like diabetes mellitus, uremia and digestion diseases [5,6]. Oral mucosa is more sensitive to changes of hormone and it is more sensitive for the changes of women sex steroid [7]. This change of oral normal condition causes dryness and discomfort feeling of the female.

This study employed cross-sectional survey, covering both rural and urban areas in Dhaka district of Bangladesh. Data was collected in the period from February 2017 to January 2018. All participant must be healthy and completely free of systemic diseases. All participant completed an information including demographic data, history of smoking and habits. Patient must had at least 20 teeth, no dental caries, calculus, no defective restoration and no impacted or partially impacted 3rd molar teeth or no tongue coating. The participant also used to dentifrice without antimicrobial agents. That means, only those participants in perfect oral and systemic health were included for this study. Women were selected those had normal regular menstrual cycles lasting from 25-35 days; were not pregnant, had not taken any oral contraceptive in the last 6 months. The menstrual cycle time were in the ranges 24-34 days where variability not more than 5 days. Every participant was examined once during the menstrual phase, once during the follicular phase and once during the premenstrual phase. According to normal physiology, the menstruation is 28 days that’s why examination took place between the 1-4 days for menstrual phase, days 24 to 27 days for premenstrual phase and 7-11 days for follicular phase. The examination ranges for every phase was adjusted according to the participant’s average cycle length, taken for 6 months evaluation by the calendar method. The premenstrual phase was detected by the women’s report on the onset of her menstrual phase. Sample were selecting purposively.

Every diagnosis done designated research room and evaluated at the same time every weekday to minimize the influence the biological rhythms. Data were collected and examined when the participant were not suffering any stressful events or had no academic examination. Participant anxiety level were examined by Beck anxiety inventory and halitosis measured by organoleptic method.

Patient advised to complete the Beck Anxiety Inventory (BAI) questioner. BAI contained 21 questions that helped to measure the degree of severity level of anxiety, according to BAI it rated as four- point scale- “not at all” to “severely”. Then the scores interpreted-0-21 indicated low level of anxiety, 22-35 indicated moderate anxiety and more than 36 indicated severe level of anxiety. The instrument has valid internal consistency (α=0.92) and high-retest reliability (r= 0.75) [10].

Organoleptic method is the gold standard method for measuring and assessing bad smell [11]. This method is a simple commonly used measurement method. At first a plastic tube inserted patient’s mouth, preventing the dilatation of the mouth air with the room air. Then the patient inhaled slowly, and the examiner judges the odor at the other end of the tube. A separator with a hole for tube used for separating between examiner and participant. Nasal-breath examined by one nostril while another nostril closed by finger [12]. The effectiveness of odor measured by using Rosenberg scale from 0 to 5 which is as follows: 0= no odor, 1= barely noticeable odor, 2= slight but clearly noticeable odor, 3= moderate odor, 4= strong offensive odor, 5= extremely foul odor [13]. The participant with Rosenberg scale 0 and 1 considered as no odor, 2 considered as mild odor, 3 considered as moderate odor and 4 and 5 considered as severe odor. For getting good results the participant followed the following rules a, avoided to using any type of oral rinse or mouth freshener for one week before the examination day b, abstain to eating spicy food that contained onion or garlic 24 hours before the experiment c, avoid to eating and drinking for at least 8 hours before the experiment, although they were allowed to drink water up to 3 hours before the examination d, avoided smoking, taking antibiotics before examination [12,14,15]. In addition, the dentist avoided drinking coffee, tea, juice, smoking and using scanted cosmetic before the organoleptic measurement [12]. Spoon test was evaluating at the distance approximately five cm form the examiner nose [15] and the dental floss odor test determined the presence of interdental plaque odor [15]. Organoleptic measurement conducted by three expert dentists. The kappa index for evaluated the examiner.

This study protocol was reviewed and approved by the Hasan Eye and Dental Hospital, Bangladesh. Prior to the survey, participants were informed about the study, invite to participate, and informed of their right to decline. All clinical waste materials those used for this study was disposed of safely.

Sociodemographic factors that were related to halitosis analyzed by descriptive statistics. Sociodemo graphic differences in halitosis during menstrual cycle risk were assessed by crosstabulation. Because the outcome measure was ordinal, both unadjusted and adjusted ordered logistic regression were used to analyze the association between sociodemo graphic factors and predicted risk of halitosis during menstrual cycle. All covariates were entered simultaneously into the ordinal logistic regression models. All analysis was done by using SPSS (Version 22.0, Chicago, IL, USA) software, considering the level of significance in 5%. 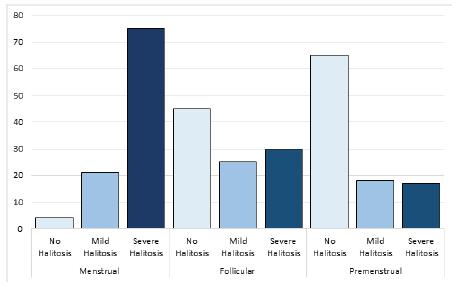 Figure 1: Level of Halitosis in different phase of Menstruation cycle.

Table 1 presents sample descriptive and evaluates variation in menstrual cycle phases as a function of age, residential area, marital status, gum bleeding and level of anxiety. Here about 36 % respondent are 21-25 years old, 60% lived in urban area and 47% are medium level of anxious at the time of survey. There was about 40% of elderly (31-35) patient showed severe halitosis during her menstrual phase. About 58.7% of participant showed severe level of halitosis, those showed bleeding during examination and 47% were suffering from medium level of anxiety during their menstrual phase. 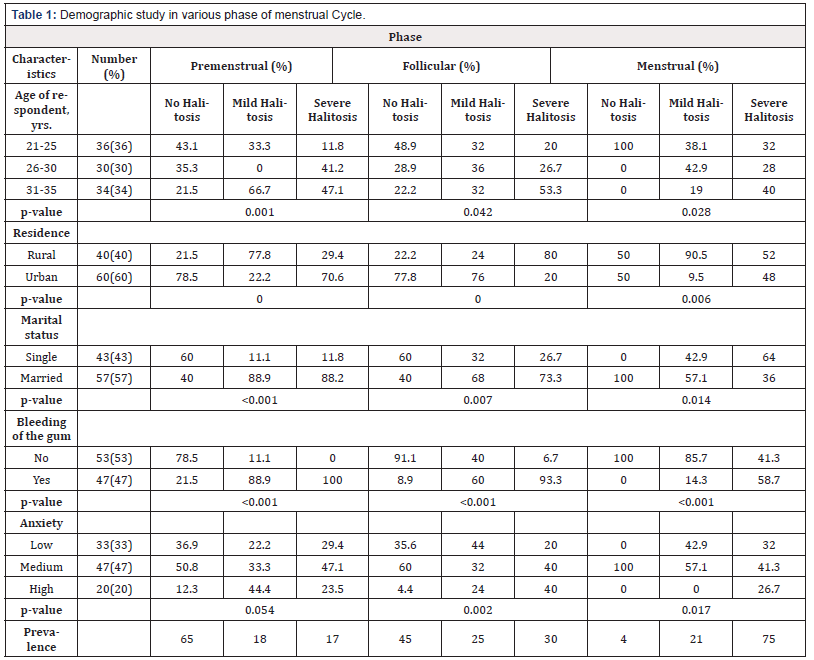 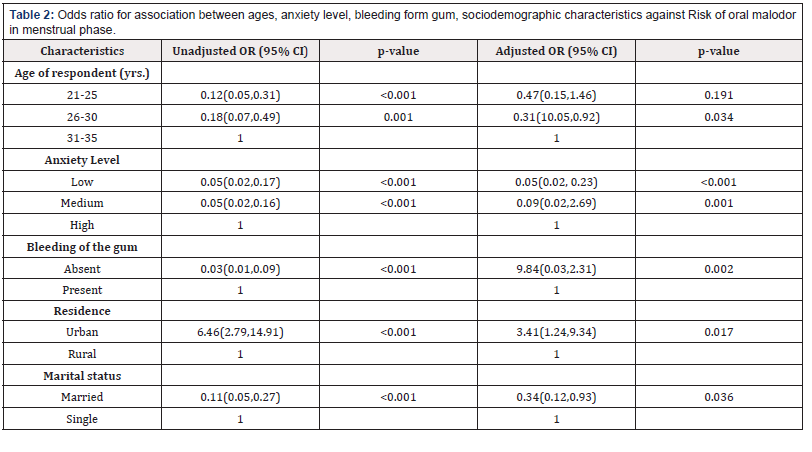 Halitosis has an important negative role in social status. Few studies are reporting the prevalence of halitosis in general population also in women during their menstrual cycle. This study result showed oral halitosis increase in menstrual phase and decrease in premenstrual phase. That means changes of level of sex hormone has an effect their oral condition. Although some covariates like anxiety, bleeding of gum and age of the participant. The relationship between stress and changing of hormonal level was known by the ancient civilization. However, changing of hormonal level has a relation on oral halitosis is not widely studied. One of the problems of the study is the effect of stress in humans is to stimulate adequately a stressful situation. Our findings showed that there has a significant level of relationship between oral halitosis and anxiety. In the unadjusted analysis, there was significant level of relationship present on the level of anxiety and halitosis level. In addition, it was more in middle age group. Changing of hormonal level in female are occurring every month actively [16]. Some study showed significant and observable gingival inflammatory changes occurs [17-20]. This inflammatory change causes bleeding from the gum. In addition, bleeding on the gum is the cardinal sign of gingivitis. This Gingivitis causes oral halitosis.

All women who suffered from the premenstrual syndrome has higher halitosis. Previous studies showed similar results [14,21]. Pain and anxiety is more in the special period of the women life. The limitation of the study, unable to measure the volatile Sulphur compound due to unavailable of measuring machine. However, another variable were measure correctly. In addition, it should be remembered that study was carried out in nonsmoker participant.

In conclusion, this study showed that some demographic factor with some external factors exacerbates oral halitosis during menstrual phase. It seems that different sex hormone causes halitosis in different phases. However, some surrounding factors influencing that and causes severe problem. This subject needs more research for discovering the possible causes.

The author(s) received no financial support for the research, authorship and/or publication of this article.

The author(s) declared no potential conflicts of interest with respect to the research, authorship, and/or publication of this article.