This study evaluates prophylactic and curative antiplasmodial effects of Rauwolfia vomitoria leaf extracts on Plasmodium berghei NK 65. The extracts of the leaves at 100, 200 and 400 mg kg-1 body weight/day dose levels were used to treat the test groups 72 hours before infection for the prophylactic test and 72 hours post infection for the curative test while a standard antimalarial drug, chloroquine, at a dose of 5 mg kg-1 body weight was administered on the positive control group. The negative control groups were left untreated. The level of parasitemia, Percentage Packed Cell Volume (% PCV), erythrocytes (RBC) and leukocytes (WBC) counts in the different groups were monitored also, bicarbonate, creatinine, uric acid, urea, calcium level and histological effects of extracts were determined during the period of study. Qualitative and quantitative phytochemicals of water and ethanol leaf extracts were determined. The water and ethanol crude extract at 400 mg kg-1 body weight/day had chemo-suppression of 95.27 and 97.21% for prophylactic test as against 81.88% for the standard drug while the level of parasitemia was reduced by 80.91 and 87.64% respectively after treating for five days in the curative test as against 88.98% for the standard drug. The variations in the values of Percentage Packed Cell Volume (%PCV), erythrocyte counts, bicarbonate, creatinine, uric acid, urea and calcium level for groups treated with water and ethanol extracts were significant (p<0.05) for prophylactic and curative treatment. Histological features revealed that there were well-formed liver hepatocytes with minor injury in ethanol extract when used as prophylactic treatment. Alkaloid, Anthraquinones, Cardenoloides, Glycosides, Phenol, Phlobatanin, Reserpine, Resins and Saponin were present in the crude extract. The result of this study suggests that extracts of R. vomtitoria has antiplasmodial effects, these however supports local claims on the efficacy of the plant’s leaf in the treatment malarial infections. This study has implications in future development of antimalarial drugs with little or no cytotoxic effect.

Ethno botany is the use of plants by humans traditionally; a science, which include a study of the plants used tribally for food, medicine and clothing [1] and it is an effective way to the discovery of future medicine [2]. The world health organization (WHO) estimates that 80% of some Asian and African countries use herbal medicines for some aspect of primary health care although orthodox medicines are readily available, a large percentage of the population still use herbal remedies along with or in preference to conventional medicines [3]. African medicinal plants have demonstrated diverse potentials as possible sources of promising antibacterial and antiplasmodial compounds that are accessible, cheap, affordable, available and sustainable [4-6]. Rauwolfia vomitoria Afzel (Apocynaceae) is a small shrub evergreen perennial plant, which grows to 15m high and has oval or oblong shiny leaves in whorls, straight veining and a cluster of inconspicuous white or greenish flowers producing red berries [7]. It grows in most tropical forest of pacific, South America, Asia and Africa. In Ghana and Nigeria Rauwolfia vomitoria is used traditionally against snake bites, malaria, fever and nervous disorders as well as emetic and purgative [8]. R. vomitoria are also used in the treatment of cerebral cramps, jaundice and gastrointestinal disorders in children [9]. The watery solution of the bark of R. vomitoria can be used against parasites such as lice and scabies [10]. In Mali, the roots of Rauwolfia have been use in the treatment of hemorrhoids and hepatomegaly [11].

Source and Identification of Plant Leaf

R. vomitoria leaves were collected from North gate area of The Federal University of Technology, Akure, Ondo State. The leaf were collected before the sunrise to prevent plant photo-oxidation, the leaf that has no injury nor chlorosis were sorted out and kept in a clean sack for further work. The plant (commonly referred to as Asofeyeje (Yoruba) and was authenticated by plant scientist at the Federal University of Technology, Department of Crop Science and Pest management.

Method of [12] was used for the processing and extraction of Rauwolfia vomitoria using ethanol and hot water as extraction solvent. The extracts were preserved in a sterile bottle at 4°C ready for use.

The experimental mice were obtained from the school of biological science, Afe-Babalola University, Ado-Ekiti. During the acclimatization period (14 days), all mice were fed with water and commercial feed under standard conditions according to [13]. They weigh between 19-23g and were all male.

The parasitemia count was carried out daily starting from after the first oral treatment. This was carried out by a little cut on their tail and making a smear of the blood on the slide.

Group A- Infected and treated with 100mg/kg R. vomitoria of ethanol extract.

Group B- Infected and treated with 200mg/kg R. vomitoria of ethanol extract.

Group H- Infected and treated with 0.2mls of distilled water.

Prophylactic activity was tested using the procedure described by [14]. Mice in group A-F were treated with graded dose of extracts, group G and H received 5 mg/kg of chloroquine (positive control) and 0.2 ml of normal saline (negative control) for 3 days after which the mice were inoculated with Plasmodium berghei.

Curative assay was carried out by inoculating each mouse in the 14 groups with the parasite intraperitonally and left for 72 hours (3 days) to achieve parasitemia count of 100,000 parasites/μl. Mice in group A-F were treated orogastric ally with plant extracts at different concentrations (100, 200 and 400 mg/kg) while mice in the positive (Group G) and negative control (H) group were treated with 5 mg/kg chloroquine and 0.2mls of distilled water respectively for 5 days [15].

The phytochemical analysis was carried out according to the standard methods of analysis by [16].

Biochemical tests for determination of bicarbonate, creatinine, calcium, uric acid and urea level were done according to [17].

Collection of Liver from Experimental mice and Histopathological Test

The results shown in Table 1 revealed the percentage yield of plant extracts. The ethanol extract of R. vomitoria yielded 10.2% while the hot water extract had 6.8% yields.

The result of R. vomitoria extracts qualitative phytochemical compositions are shown in Table 2. The result showed that alkaloid, anthraquinones, cardenoloides, glycosides, phenol, phlobatanin, resin and saponin were present in hot water and ethanol extract of the plant, however, ajimaline was absent. 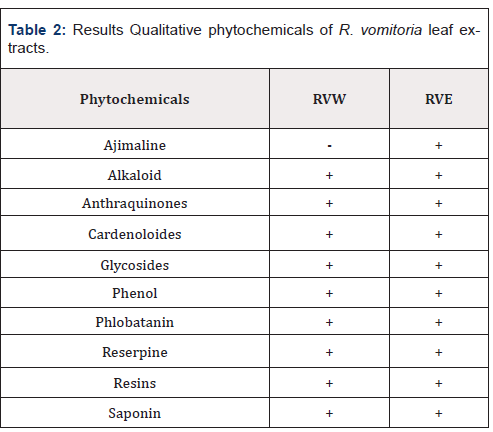 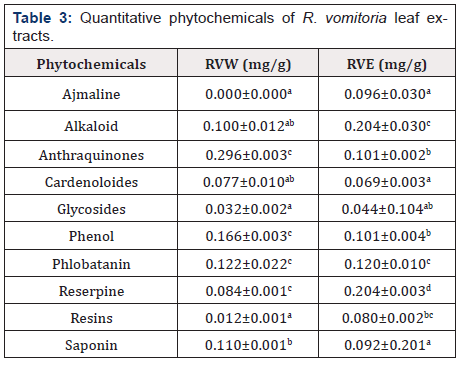 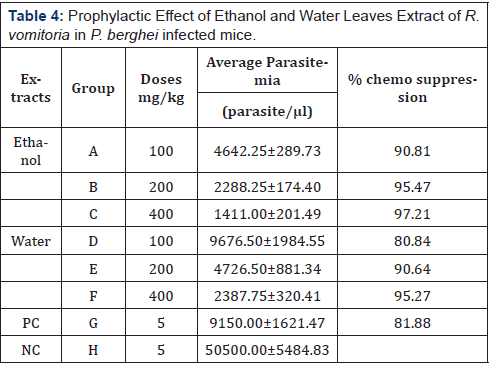 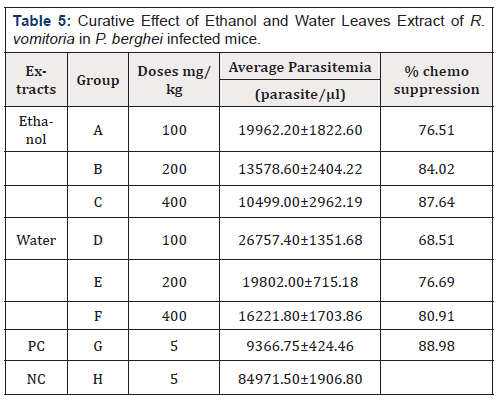 The curative result of the biochemical assay as showed in Table 6 revealed that the treated group significantly (p<0.05) decreased the biochemical parameters at100 and 200 mg/kg concentration and at a higher concentration (400 mg/kg) increased some parameters compared with the standard range of organ function indices. The least significant (p<0.05) decrease was observed at 100 mg/kg ethanol extract for Biocarbonate (12.00±2.00 mMol/L). At 400 mg/kg water extract, biocarbonate and urea had the highest significant (p<0.05) increase of 42.44±2.85 and 5.47±0.35 mMol/L. 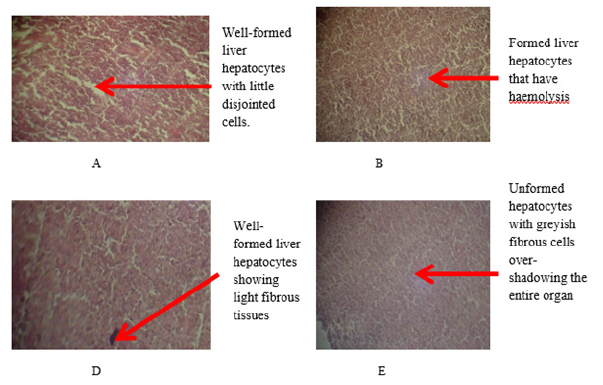 Figure 1: Plate 1A-D: Curative assay photomicrographs of the sections of the ×200, showing features of mice treated with R. vomitoria. 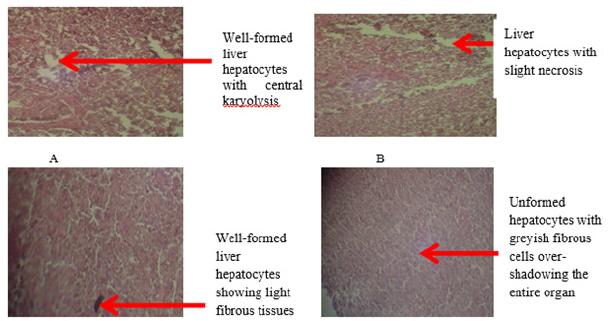 Figure 2: Plate 2A-D: Prophylactic assay photomicrographs of the sections of the ×200, showing features of mice treated with R. vomitoria.

The results of this study indicated that the water and ethanol extracts of R. vomitora produced a dose dependent chemosuppressive antimalarial activity. The chemo-suppressive activity against Plasmodium berghei was greater as the concentration of the plant extracts were increased. This indicates that antiplasmodial efficacy of plant extracts were dose dependent. The ethanol extract had higher chemo-suppression activity than the water extracts, this could be that ethanol extract contained more bioactive compounds which act as antiplasmodial agents. This corroborate the work of [22], the concentrations and proportions of the active compounds in plant extracts components depend on the solvent used in processing the plant. This result also showed that the plant extracts had a better chemo-suppressive activity for the prophylactic than the curative assay; this indicates that the plant extracts provide a better antiplasmodial efficacy when used as prophylaxis antiplasmodial drug. The percentage yield of the plant extracts using different solvents revealed that ethanol solvent gave the highest yield. [23] reported that alcohol is a better solvent for more consistent extraction of active substances against microbes from medicinal plants compared to other solvents. This may be due to the fact that ethanol is polar solvent and may be able to extract the bioactive ingredients without denaturing them. This agreed with the findings of [24], who reported that ethanol extract of some certain plants have higher phenolic and flavonoids when compared with the percentage yield of other solvents. This justifies the traditional use of alcohol in extracting the components of medicinal plants for application against pathogens [24]. The presence of phytochemicals is an indication that the plants contain bioactive components that might be responsible for the antiplasmodial properties of the extracts. This result is in accordance with the report of [26] and [27], who reported the presence of some phytochemical constituents in these plants.

The result of the biochemical assay that is, organ function indices showed that there was significant decrease in the level of biochemical parameters at lower concentration of extracts in the treated group compared to the untreated group, however, there was increase in the biochemical parameters at higher concentration as against the standard range of the parameters. This justify the study of [28-31] that the sudden elevation in the urea level and imbalance in the electrolytes level may be due to high concentration of plant extracts and malaria infection which could serve as indicators for kidney dysfunction. The histopathology results showed that the extracts exert some level of therapeutic effects on the infected mice compared to the untreated group which had unformed hepatocytes with greyish fibrous cells over-shadowing the entire organ. According to [17] which stated that infections that causes shrinking of the hepatocytes is toxic to the liver hepatocytes which result in the liver unable to perform its vital function of deamination and detoxification in the body of the host. The result obtained in this study however justifies the work of that administration of antimalarial drugs reduce the extent of damages caused by malaria parasite on the liver.

From the result of this study, it is evident that hot water and ethanol extracts of R. vomitoria possess antiplasmodial properties against Plasmodium berghei NK 65. Antiolasmodial efficacy of this extracts are dose dependent, however, ethanol extract showed higher antiplasmodial efficacy. Also, organ haematological indecies revealed that the extract could be toxic at higher concentration. The phytochemical and in vivo antiplasmodial activities of the studied plants indicate the rightful use by traditional healers. The presence of various phytochemical constituent in the extracts of the plants could be harnessed for developing and producing novel antimalarial drugs of natural source.