Although Staphylococcus aureus (S. aureus) is a bacterium that remains widely studied because of its high pathogenic potential and its ability to develop resistance to antibiotics routinely used in clinical practice; this study investigated the occurrence of methicillin- resistant Staphylococcus aureus (MRSA) in some ready to eat (RTE) meat products collected from some public restaurants and street vendors in Benha city, Qalubiya governorate, Egypt; a total of 120 RTE beef products represented by kofta, burger, shawerma, and luncheon (30 of each) were examined for the prevalence of S. aureus and molecular detection of MRSA strains represented by the presence of mecA gene containing isolates; results revealed that kofta was the most contaminated samples with S. aureus where the mean count was 5.2x10 CFU\g; followed by burger, shawerma and luncheon samples. Molecular detection of MRSA isolates carrying mecA gene revealed that out of eight examined isolates, 2 (25%) of examined isolates were MRSA strain. The presence of S. aureus especially MRSA strains in high prevalence among examined RTE meat products emphasizes the necessity of enforcing application of strict hygienic measures and GMP during preparation, handling, and serving; in addition, the health authorities must exert more control over street vendors and fast food restaurants.

Now a days, ready to eat (RTE) meat products-based sandwiches of shawerma, kofta, etc. are commonly prepared and sold by many restaurants which are widely distributed all over the country (Takeaway). S. aureus is one of the most important microorganisms which can contaminate or re-contaminate cooked foods by workers hands, equipment or utensils [1]. This microorganism is associated with nosocomial and community-acquired staphylococcal infections, primarily related to the emergence of drug-resistant organisms [2]. Methicillin-resistant S. aureus (MRSA) strains were firstly identified in 1961, immediately after the introduction of methicillin in clinical settings [3]. Since then, increased resistance to methicillin among S. aureus isolates has been observed globally [4]. Because S. aureus is highly prevalent in food and food environments, MRSA may follow the same transmission pattern, and although MRSA infections have not been associated with the consumption of contaminated meats, the pathogen has entered the food chain. Methicillin-resistant S. aureus (MRSA) is mainly attributed to the presence of mecA gene, located on one of Staphylococcal cassette chromosomes mec (SCCmec), that encodes penicillin-binding pro tein 2a (PBP2a) with a low affinity for essentially all beta-lactam antimicrobials resulting in difficult treatment of infections [5]. Methicillin-resistant S. aureus (MRSA) is known to be one of the most prevalent nosocomial pathogens throughout the world and can cause a wide range of food poisoning, pneumonia, postoperative wound infections and nosocomial infections [6]. In recent years, methicillin-resistant S. aureus (MRSA) has been identified in domestic animals and animal-derived food products worldwide [7]. Food products surveyed as meat and its products are widely known to be an important reservoir and main source of MRSA in humans [8]. Therefore, the present study was conducted to investigate the incidence of coagulase-positive S. aureus and methicillin-resistant S. aureus (MRSA) strains in different popular ready-to-eat meat sandwiches (kofta, burger, shawerma, and luncheon) in Benha city.

A grand total of 120 samples of RTE meat products represented by “luncheon, burger, shawerma and kofta” (30 of each) were collected from different restaurants and street vendors in Benha city, Qalubiya governorate, Egypt; Samples were transferred to the laboratory under complete aseptic conditions in ice box within one hour and examined for bacteriological and molecular detection of the incidence of S. aureus and MRSA strains contamination.

Preparation of sample according to APHA (2013): Twenty- Five grams of the examined samples of meat products were aseptically transferred to a sterile stomacher bag and homogenized with 225 ml of 0.1% sterile buffered peptone water for 1-2 min to give an initial dilution of 1/10. One ml from the original dilution was transferred by means of sterile pipette to another sterile tube containing 9 ml of sterile buffered peptone water (1%), and then mixed thoroughly by using vortex for 5-10 seconds to obtain the next dilution, from which further decimal serial dilutions were prepared.

Determination of Staphylococci and S. aureus count according to (ISO 6888-1:1999, A1:2003): 0.1 ml from each of previously prepared serial dilutions was spread over duplicate large Baired Parker agar plate using a sterile bented glass spreader. The inoculated and control plates were inverted and incubated at 37°C for 48 hours. After which they were examined for colony character. The developed colonies (shiny black colonies) were enumerated and total staphylococcal count/g was calculated. The suspected colonies of Staphylococcus aureus appear as black, shiny, circular, smooth, and convex with narrow white margin and surrounded by a clear zone extending into opaque medium were enumerated and total Staphylococcus aureus count/g was calculated.

Referring to the results demonstrated Table 2, S. aureus could be isolated from 61 (50.8%) samples, represented by 66.6, 43.3, 36.6, 56.6% with mean counts of 5.2x10, 3.2x10, 2.6x10, and 1.9x10 CFU\g from kofta, burger, shawerma, and luncheon samples, respectively; statistical analysis of variance indicated a significant difference between kofta and the other samples when p ≤ 0.05. In vitro antibiotic sensitivity test was conducted on 61 S. aureus isolates as demonstrated Table 3; although, isolates showed variable sensitivities against different antibiotics, in general, they showed multidrug resistance for about 42.8% of tested antibiotics represented by Oxacillin (70.5%), Methicillin (70.5%), Nalidixic acid (60.6%), Amoxicillin (59.0%), Cefotaxime (55.7%), and Ampicillin (50.8%); while were most sensitive to Norfloxacin (95.1%). Performing of PCR detection of MRSA strains revealed positive detection of mecA gene band at 533bp in two isolates out of examined eight isolates (25%) as presented in Figure 1. 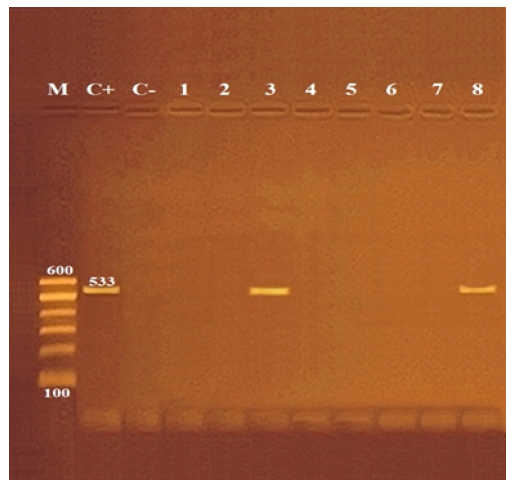 No.: Number of isolates

%: Percentage in relation to total number of isolates (61).

Since few decades ago, S. aureus was reported as incriminated pathogen in 25% of all foodborne illnesses in the United States of America; with continuously misuse of antibiotics and emerging multi-drug resistant bacteria, MRSA strains have been aroused as one of the most feared nosocomial germs that play important role in food poisoning; and however low prevalence of MRSA in food, the thread comes from difficulties of treating of infections due to multidrug resistance of MRSA [16-18].

Variations between authors may be attributed to the differences in manufacturing, processing and handling procedures. Presence of S. aureus in such RTE foods highlighted preparation, handling, storage or service faults which may come through cross-contamination from raw food, food handlers and the surrounding environment; in addition, spices, equipment, dressings, knives, and other additives are considered as the source of contamination.

Results of antimicrobial sensitivity test as summarized in Table 2 were somewhat agreed with the results recorded by [25,26] who recorded a multidrug resistance of their S. aureus isolated from meat and meat products. Most of S. aureus isolates were resistant to all β-lactams antibiotics, which is conferred by the mecA gene, which codes for an altered penicillin-binding protein (PBP2a or PBP20) that has a lower affinity for binding β-lactams (penicillins, cephalosporins, and carbapenems). This allows resistance to all β-lactam antibiotics and obviates their clinical use during MRSA infections as mentioned by [27]. From the other hand, results of molecular detection of the presence of MRSA in examined RTE samples agreed with [19,21] who could detect mecA gene containing S. aureus isolates from examined RTE samples [28-30].

The high prevalence of S. aureus among the tested samples, mainly in kofta and luncheon samples, and the presence of the MRSA in prepared foods highlighted the necessity of enforcing hygienic practices within fast food and street vended foods kitchens. In the future, the molecular and ecological characterization of isolated MRSA strains must be performed to determine the origin of contamination. Better knowledge of strict hygienic practices during collection of raw materials, preparation of food, holding, storage and serving must be educated to food handlers.