The unusually sensitive solvatochromism of 2,5-dicyano-4-methyl-4’-dimethylaminostilbene (P1) whose emission maximum varies from 445 nm in cyclohexane to 641 nm in DMSO are described. 1a with remarkably large two-photon cross sections exhibits very strong polarity-, viscosity-, and temperature-dependence of fluorescence, and can be used to detect polarities, viscosities, and temperature. The successful application of P1 provides a brilliant prototype for the developments of ideal two-photon fluorescence probes.

For the development of two-photon (TP) fluorescence (TPF)- optimized molecular probes, it is important to have a significant modulation of the photophysical properties of the chromophore in response to external stimuli, such as polarity, pH, ion concentration, and temperature. At the same time, the chromophore should retain a significant two-photon absorption (TPA) cross section (δ) in a suitable excitation window for biological imaging (700–1000 nm, corresponding to an optimum combination of reduced scattering and absorption in biological samples). In contrast to PET-based fluorescence probes, which only show increasing or decreasing emission intensity at fixed wavelength, solvatochromic probes may indicate the presence of an analyte by a significant change of emission wavelength [1] which is unequivocally detectable. Although a small number of TPF probes for polarity were reported [2,3] and two among them were used for lipid rafts imaging [3] their applications can’t be extended from polarity detection to viscosities and temperature. Furthermore, in them, small moleculesize always be accompanied by narrow solvatochromic range and small δ. So, they are not ideal candidates for TP solvatochromic probes [4,5].

An ideal TP solvatochromic probe should have wide solvatochromic range, small molecule-size, large δ and excellent photostability. Herein, we report two TP solvatochromic probes (P1 and P2) derived from 4-methyl-2,5-dicyano-4’-amino stilbene (DCS) with remarkably large δ, which has been successfully employed in the design of TPF probes for metal ions.4 DCS is a pushpull chromophore with a donor-π-acceptor (D-π-A) architecture. It is studied that these two probes are applied to the detection of solvent polarities, viscosities and temperature, especially twophoton triple fluorescence is found for the first time.

The absorption properties of P1 are almost independent on the solvent (Table 1).

However, with respect to the emission properties, P1 exhibits an unexpected strong solvatochromism. Only a few previous examples of solvatochromic behaviour for stilbene derivatives [5] which just possess one substituent at most in the single aromatic ring and are not ideal candidates for solvatochromic probes had been reported. Thus, the emission maximum (EM) for P1 (P2) varies from 445 (452) nm in cyclohexane to 641 (604) nm in DMSO. The reason why the solvatochromic shifts of P2 are somewhat smaller (ca. 156 nm, cf. SI) is that both decreasing transition energy and increasing sensitivity to solvent polarity for the weak electron donor diphenylamino group are inferior to ones for the strong electron donor dimethylamine group (Table 1) (Figure 1,9 & 17). 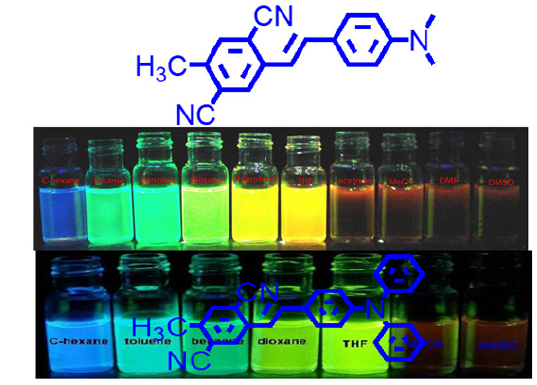 Protic solvents (Hydrogen-Bonding-Donor, HBD) can interact with the donor (dimethylamino) for the ground state of P1 to stabilize the ground state more than the excited state, and thus, lower energy for the ground state results in a relative blue shift as compared with strong polar aprotic solvents (Non-Hydrogen- Bonding-Donor, NHD). The fitting between EM in wavenumbers and the solvent parameters such as the ET (30) data [6] the Kosower parameter, Z, the Gibbs energy of activation of the solvolysis (δΔG≠) [6], the index of solvent dipolarity/polarizability (π*) [7] and the Lippert-Mataga scale (Δf) [8] gave an almost linear relationship (r 2 = 0.90, 0.90, 0.90, 0.85, 0.82, respectively).

In one- and two-photon emissions (OPE and TPE), band A (1La) of P1 in glycerol all shift to the red with increasing temperature, and the relative intensities of band B (1Lb) gradually decreases (Figure 2). The viscosity dependence of the fluorescence for P1 exhibits differences between A band and B band, and between OPE and TPE (Figure 3). The intensities of B band in OPE and TPE steadily increase upon the augment of viscosities, whereas the intensities of A band in TPE at first rapidly decline, and then enhance, and a third band at 542 nm, namely exciplex (E) fluorescence from strong intermolecular donor-acceptor systems [9] finally disappears in pure glycerol (Figure 3). Never has this property in two-photon been reported. High viscosity preventing intermolecular charges from transfer should be responsible for the disappearance of the third band whose no emergence in the OPE possibly consists in its low intensity and short lifetime. In addition, at the low concentration (10- 6 M) of P1, the intensity ratio (IR) Ia/Ib of the emission bands A and B decreases with increasing viscosity, but at the high concentration (3 × 10-6 M) the IR Ia/Ib increases, irrespective of OPE and TPE (cf. SI). Furthermore, the concentration dependence [10] is found for the IR Ia/Ib of the emission bands A and B of P1 in alcohol (cf. SI). The above environmental influences upon triple fluorescence bands A, B and E usually indicate three emissive species, i.e., the localized excited state (LE), a twisted intramolecular charge transfer state (TICT) and an intermolecular exciplex [11].

As expected, δTPA of P1 climbs its maximum of 5560 GM in nonpolar cyclohexane, while in strongly polar aprotic DMF it falls to its minimum of 130 GM. In general, δTPA of P1 are much larger in low polarity aprotic solvents than in high polarity aprotic solvents, which should be attributed to the excited state configuration transformation (Table 1). The reduction in emission intensity for P1 in acetone and other more polar solvents together with a near lack of photo reactivity is certainly consistent with decay of the emissive state to one or more of the possible noncop-lanar and no emissive TICT which subsequently decay rapidly to the ground state [5c] (Figure 7 & 22).

As in other solvatochromic systems [12], an internal charge transfer (ICT) due to a strong donor-acceptor interplay between the dimethylamino and the 2,5-dicyano-4-methyl stilbyl moieties can take place in the excited state of P1. On one hand, ortho- and meta-cyano groups of double bonds (C=C) are fairly strong electron acceptor in the ground state, which can remarkably decrease transition energy, stabilize resonance structures and increase both the excited state dipole moment and molecular sensitivity to solvent polarity. On the other hand, these two cyano groups can notably extend conjugated system, which consumedly improves δTPA and the fluorescence quantum yield. Additionally, in the excited state, the adiabatic ICT leads to an intermediate that most likely develops a negative charge for the nitrogen atom of the orthocyano group, that is, after solvent relaxation [6,12,13] stabilized not only by polar solvents, especially those with high π*, but also by the meta-cyano group with strong electron-withdrawing capacity for greater diffusion of the concentrated negative charge. This ICTsolvent relaxation sequence explains the significant red shift of the emission spectra in polar solvents as well as the temperature and viscosity dependence of the emission properties [6,13].

TPEF (two-photon-excited fluorescence) action cross-section spectra were measured according to the experimental protocol established by Xu and Webb [15] using a mode-locked Ti/sapphire laser that delivers ~ 80 fs pulses at 80 MHz. Fluorescein (10-4 M in 0.1M NaOH), whose TPEF action cross-sections are well-known [15] served as the reference. The quadratic dependence of the fluorescence intensity on the excitation intensity was verified for each data point, indicating that the measurements were carried out in intensity regimes in which saturation or photodegradation do not occur. The measurements were performed at room temperature on air-equilibrated solutions (10-5M). The experimental uncertainty on the absolute action cross-sections determined by this method has been estimated to be ±20%. Absorption spectra were measured on a HP-8453 spectrophotometer. Solvents were generally dried and distilled prior to use. Reactions were monitored by thin-layer chromatography on Merck silica gel 60 F254 precoated aluminium sheets. Column chromatography: Merck silica gel Si 60 (40-63 μm, 230-400 mesh). 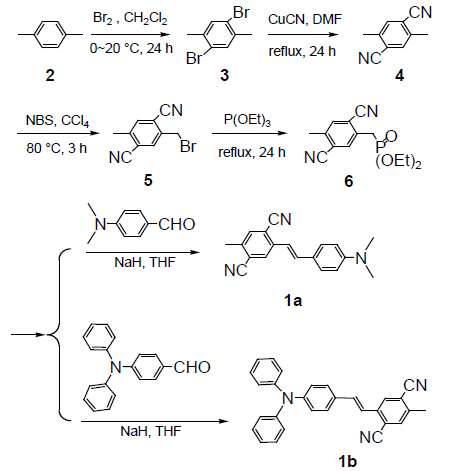 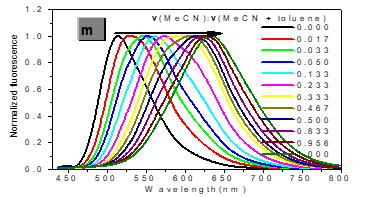 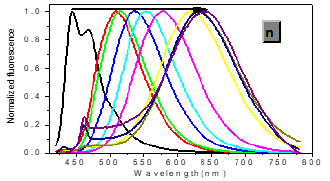 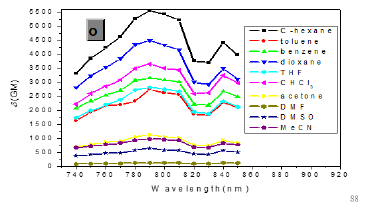 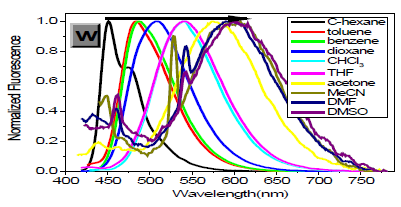 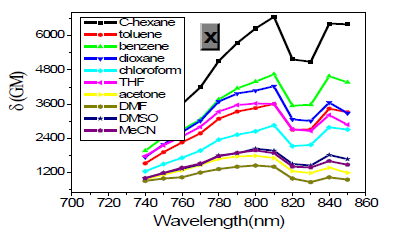 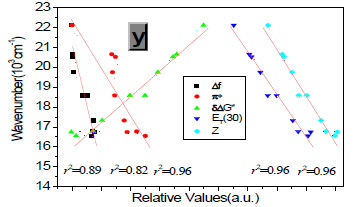 In conclusion, we have shown that the covalent attachment of two cyano groups in the single aromatic ring and dimethylamino group to stilbene is an considerably ingenious strategy, which makes the molecule a highly sensitive two-photon thermo-solvatochromic probe with remarkably large δTPA and very high fluorescence quantum yield capable of being used to detect the analytes with high π*, and to detect polarities, viscosities, and temperature. It was the first time that TP triple fluorescence was sighted in our compounds.