A statistically significant increase in the augmentation index and the value of the augmentation index resulted in a pulse rate of 75 beats per minute (AIp75) of the vessels was recorded in persons with grade 3 obesity. The stiffness index and the duration of the pulse wave were significantly higher in the subgroup of examined individuals with 1st degree obesity. The type of pulse curve “A” was more often detected in persons with obesity grade 1. A direct link is noted between the value of BMI with a stiffness index (r = 0.298; p = 0.001), an alternative stiffness index (r = 0.119; p = 0.001) and A2d4 indicators (r = 0.101; p = 0.001) of the vessels. In patients with obesity, the most associated diseases were arterial hypertension (64.3%), comorbid diseases (34.8%) and chronic obstructive pulmonary disease (14.4%). In addition, among those examined with obesity, cerebrovascular diseases were detected in 3.3%, coronary heart disease in 8.5%, chronic kidney disease in 9.9%, and type 2 diabetes in 11.3%.

The role of obesity in the development of cardiovascular diseases (CVD) is currently widely discussed. According to WHO, about 1.4 billion adults in the world are overweight, and over 500 million people are obese [1,2]. Among the possible mechanisms of the occurrence of CVD in people with obesity, it is customary to consider an increase in vascular stiffness (VSt). It has been shown that increased in VSt is associated with the aging process and is often combined with high sodium intake, arterial hypertension (AH), and diabetes mellitus. (DM), hyper- and dyslipidemia, obesity, and neurohormonal activation of the sympathetic nervous system (SNS) [3-5]. These factors lead to endothelial dysfunction, vascular inflammation, hyperplasia of vascular smooth muscle cells, increased degradation of collagen and elastin [6].

The increase in LF is a consequence of fibrosis and degradation of the elastic fibers of large arteries. Increased arterial stiffness leads to the development of hypertension [7,8]. So, the famous clinician of the 20th century E.M. Tareev in 1948 noted that “The concept of hypertension is most often associated with obese hypersthene’s, with a possible violation of protein metabolism, with blood clogged with products of incomplete metamorphosis - cholesterol, uric acid ...” [9] Information on the problem of obesity, as a rule, was obtained in large, epidemiological studies [10,11]. Currently, people with obesity is of importance to the assessment of the mechanical properties of blood vessels: stiffness, extensibility and compliance of their walls. However, in the literature there are few works devoted to the analysis of SJ in obesity, considering its degree. Purpose of the study. To study and analyze the state of vascular stiffness and central hemodynamics in obesity.

Studies of the central arterial (aortic) pressure (CAP) and the parameters of vascular stiffness (SJ) were performed on the Angioscan-01 device (Angioscan-Electronics LLC, Russia) [12]. The augmentation index (AI, Alp, augmentation index) was calculated as the difference between the second and first systolic pressure peaks of the pulse wave, which were expressed as a percentage of the pulse pressure. Pressure augmentation called the difference between pressure of the first (T1) and second (T2) systolic peak of the pulse wave. It is this part of pulse blood pressure that increases significantly with an increase in LF, causing the growth of CVD and an increase in the afterload on the left ventricular (LV) myocardium.

The value of the augmentation index was expressed in percent and was calculated using the formula: AIp= 100% * (D [T2] - D [T1]) / D [Tmax], where D [Tn] is the data value at time n. In addition, all participants studied the type of pulse curve. Allocated the following types. “C” type of curve is characterized by finding the maximum of the reflected wave (OM) in the late systolic phase and its projection point on the original curve (yellow color) is located on the descending arm close to the moment of aortic valve collapse. This type of curve is observed in young people under 30 years of age who do not have risk factors for the development of CVD associated with atherosclerosis. The type “B” of the curve is characterized by the finding of the maximum of the OB in the middle of the systole, and the point of projection on the initial curve almost coincides with the global maximum of the initial curve. This type of curve is observed in people older than 40 years, or in younger, but with risk factors for the development of CVD.

The distribution of study participants by degree of obesity and by age are presented in Table 1. In our study, the proportion of people with obesity grade 1, both in the total sample and in women and men, was numerous. Among the surveyed, people of middle (45.1%) and elderly (27.8%) age prevailed. In our study, obesity in 10.2% and 46.5% of cases was associated with smoking and tachycardia, respectively. Morbid obesity was detected in 51 individuals in 7.1% of cases. The number of participants surveyed with obese adulthood and the frequency of smoking was significantly higher among males. As can be seen from the obtained data, the proportion of elderly people with obesity significantly prevailed in women (Table 1). 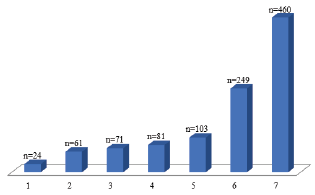 Obesity is a serious world-class medical and social problem, and its combined course with hypertension, DM, COPD and CHD is characterized by a decrease in the quality of life, increase in the frequency and duration of hospitalization [14,15]. The present study summarizes the current views on the mechanisms of formation of cardio-nephritic and cerebrovascular risk in obesity with an emphasis on LF. An important role in the regulation of SJ in people with obesity is played by the renin-angiotensin-aldosterone system (RAAS) [16,17]. Experimental studies have shown that an increase in arterial stiffness is associated with structural changes in the vascular wall [17,18]. This is manifested by diffuse intimal fibroelastic thickening with endothelial remodeling, changes in the extracellular matrix, increased content and disorganization of collagen, fragmentation of the elastic membrane, infiltration of walls with smooth myocytes, fibrosis and calcification [19]. Many studies have found that adipokines of adipose tissue contribute to the development of a sluggish inflammatory process in people with obesity, leading to a complex of metabolic disorders, cardiovascular complications (CCO) and to autoimmune inflammatory diseases [14,15].

Systemic inflammation and adipokine production are considered as the most important mechanisms by which adipose tissue has a damaging effect on the vascular wall [20]. The content of one of adipocytokines, leptin, is increased in obesity and is associated with MTR, regardless of BMI and traditional cardiovascular risk factors [21]. Several researchers indicate a weak and moderate correlation of LJ parameters with BMI [22]. This confirms the well-known fact that under the influence of BMI and hypercholesterolemia, atherosclerotic processes in the vessels are more pronounced, which contributes to their remodeling [23]. It has been shown that an increase in aortic stiffness, assessed by the degree of increase in the pulse wave velocity (SPV), is an independent predictor of the risk of SSO [24]. It is considered that SPV is a parameter that integrates the geometry and elastic properties of blood vessels. It should be noted that the close relationship between the magnitude of the BMI and the indirect signs of SST obtained in this study (Table 2). 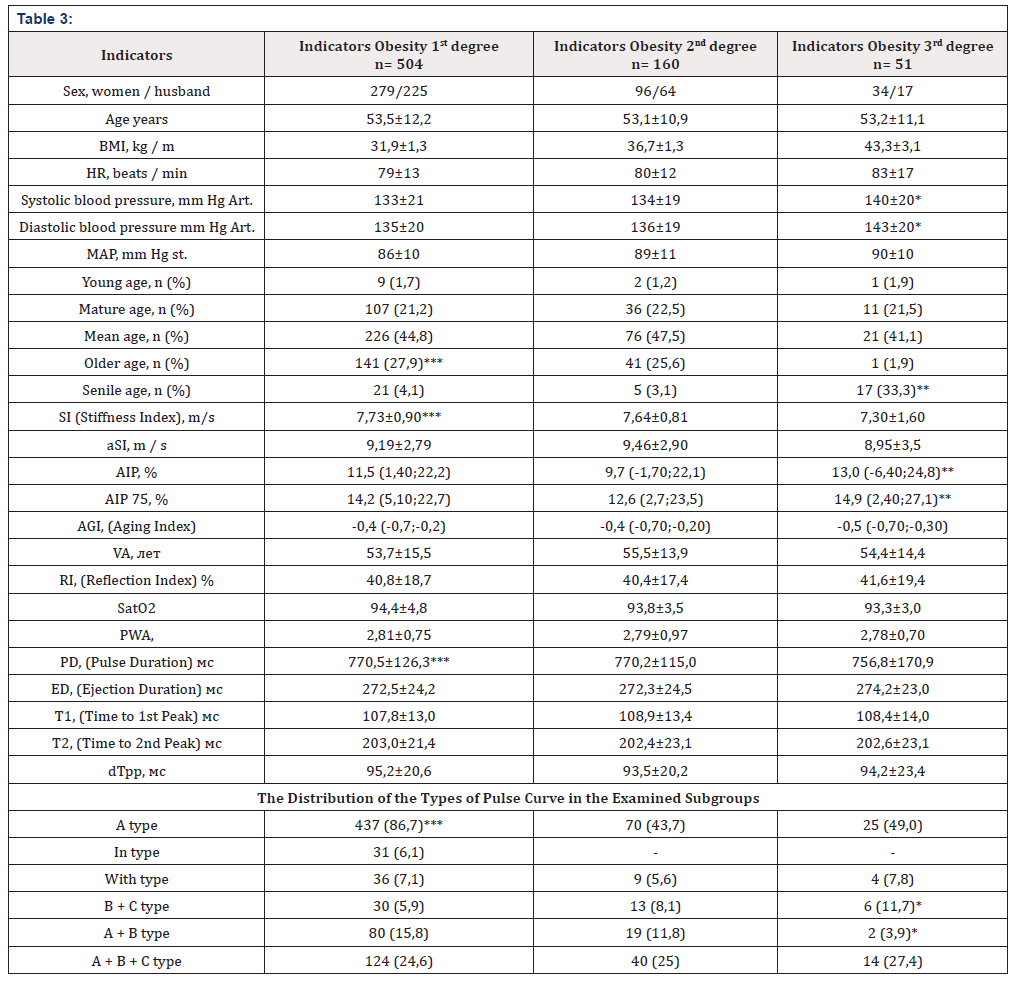 The prognostic value of SST in the arteries is most important even during the formation and at the initial stage of hypertension [25]. In some studies, it has been noted that in obesity, an increase in stiffness of the arteries and blood pressure is observed in comparison with patients with normal weight [26,27]. As noted, obesity decreases compliance and increases LF. An increase in PWV is a sign of subclinical coronary atherosclerosis, which makes it possible to use this sign as an independent risk factor for AH, the detection of which is especially important for obese patients who are asymptomatic. It is important to note that the PWV and the associated arterial augmentation index are interesting from the point of view of pathophysiology and have a great prognostic value. The role of SST as an independent risk factor for cardiovascular and renal diseases was summarized in our previous study [28,29]. We were able to demonstrate a significant increase in vascular augmentation index in persons with 3rd degree obesity, and persons with 1st degree obesity significantly increased the vascular stiffness index (Table 3).

There is evidence of a positive relationship between BMI and stiffness of the great vessels, which was evaluated directly by SPV [30]. With an increase in LF, the pulse wave increases, the reflected wave returns earlier during systole, which is manifested by an increase in systolic and pulse BP and LV afterload [31]. Thus, the higher the stiffness of the aorta, the worse the subendocardial blood flow, which in turn leads to increased subendocardial myocardial ischemia [32]. As noted, with the spread of obesity, severe somatic diseases associated with it, such as hypertension, diabetes, COPD, IHD and others, are increasing and aggravated. Our data also showed that AH (64.3%) and comorbid pathologies (34.8%) were the most associated with obesity. The pathophysiological basis for the occurrence of hypertension in obesity is compensatory hyperinsulinemia, which develops due to insulin resistance, characteristic of all forms of obesity [14,15].

First, hyperinsulinemia increases the reabsorption of sodium in the proximal tubules of the kidneys, which leads to hypervolemia and an increase in the content of sodium and calcium in the walls of blood vessels, causing their spasm and increase in total peripheral vascular resistance (RPV) [14,15]. Secondly, it stimulates the utilization of glucose, amino acids, regulates expression, etc. Through mitogen-activated protein kinase, insulin promotes damaging vascular effects by stimulating various growth factors, which leads to the proliferation and migration of smooth muscle cells, proliferation of vascular wall fibroblasts, and the accumulation of extracellular matrix.

This leads to a narrowing of blood vessels and further increases the round focal length [33]. Third, hyperinsulinemia increases the activity of the CNS. In our study (Table 1) among the examined individuals with obesity in 46.5% of cases was associated with tachycardia. The role of hyperactivation of the SNA is a key mechanism of regulation of blood pressure and heart rate, and with an increase in its tone, cardiac output increases, vascular spasm occurs, and OPS increases, were noted in earlier studies [34]. Thus, all these processes cause remodeling of the cardiovascular system, leading to a loss of elasticity of the vascular wall, impaired microcirculation, increased general peripheral resistance, reduced renal blood flow and ultimately increased vascular resistance and the formation of hypertension, renal dysfunction, etc. [35].

The results showed that the prevalence of obesity 1st degree was 70.4%. In persons with obesity 1st degree, a significant increase in the vascular stiffness index and the duration of the pulse wave was found. Higher levels of central aortic and systolic blood pressure were observed in the subgroup of people with obesity grade 3 and were accompanied by a statistically significant increase in the level of augmentation index and the value of augmentation index brought to pulse 75 beats per minute. Obese individuals have been found to be addicted. between body mass index and stiffness index, alternative stiffness index and A2d4 vessel index.