About 30% to 40% of adults claim to have frequent indigestion, and over 50 million visits are made annually to ambulatory care facilities for symptoms related to the digestive system. Irritable bowel syndrome (IBS) is present in patients with symptoms of chronic abdominal pain and altered bowel habits but no identifiable organic etiology. IBS has a prevalence of 1% to 20% worldwide, although up to 75% affected individuals never seek care. Diagnosing IBS can be challenging due to the nonspecific nature of symptoms, overlapping upper and lower abdominal symptoms, and the frequent presence of somatic and psychological comorbidities. Up to 80% of IBS patients identify food as a possible trigger for their symptoms, so they increasingly ask for dietary and behavioral counseling. Moderate-severe IBS is estimated to account for around 60% of all IBS cases and has been shown to impose a considerable burden on patients. It is estimated that IBS-C accounts for around 30% of IBS cases. The economic burden of IBS in the US is estimated at $28 billion annually, a portion of these costs may be related to unnecessary and high-frequency tests, although few studies have assessed the factors underlying frequent tests and procedures among patients with IBS. 32% of IBS-C patients suffer depression as their condition almost every day in the previous month. Sexual dysfunction is positively associated with perceived GI symptom severity and HRQoL

Due to disappointing results with conventional IBS treatments, complementary and alternative medicines are becoming attractive options for many patients (Figure 1) [5-9]. Up to 50% of patients declared that they used some form of CAM for their GI symptoms, ranging from biologically active compounds to mind–body interventions [10-18]. CAM alone and in conjunction with pharmacological treatments as an integrative approach to manage patients with IBS and imssssprove their QoL [12,19-22]. Prokinetics are not specific to IBS and increase gastrointestinal motility in general by acting via dopamine and 5-HT3 receptors as antagonists or 5-HT4 receptors as agonists [23-31]. Along with prokinetics, treatment revolves around the use of therapies which are not specifically approved/not truly effective for treating IBS-C, such as laxatives, antispasmodics, gastric relaxants, or central neuromodulators and bulking agents (e.g. dietary fibers) [32-40]. Novartis has agreed to continue to supply Zelnorm® (Tegaserod maleate) for use in emergency situations, due to an increased cardiovascular risk [41,42]. Alosetron hydrochloride (Lotronex), voluntarily withdrawn in November 2000 by GlaxoSmithKline, but put back on the market, is the only medication approved for the treatment of severe IBS-D in women who have inadequately responded to conventional therapy [43-47]. However, no studies have evaluated the efficacy of alosetron using the new FDA composite endpoint which requires improvement in both abdominal pain and diarrhea [47,48]. A mixture of dried powdered slippery elm bark, lactulose, oat bran, and licorice root significantly improved both bowel habit and IBS symptoms in patients with IBS-C [49]. More than 95% of patients rated artichoke leaf extract as better than or at least equal to previous therapies administered for their symptoms, and the tolerability was very good [50]. Probiotics may be useful in the management of IBS; however, dose and specific bacterial strain are important [51]. Entericcoated peppermint oil is a safe and effective therapy for the relief of abdominal pain and global symptoms and in adults with IBS. Menthacarin, the primary component blocks Ca2+ channels and causing the relaxation of intestinal smooth muscle tissue [52-60]. STW 5 is a liquid formulation of nine herbs (Iberis amara totalis recens, Angelicae radix, Cardui mariae fructus, Chelidonii herba,Liquiritiae radix, Matricariae flos, Melissae folium, Carvi fructus and Menthae piperitae folium) used in clinical practice in Germany for more than 50 years, acts beneficially on abdominal symptom clusters as well as on individual GI symptoms in adults and children with efficacy, tolerability, reduced children school absenteeism [61-70]. Turmeric (Curcuma longa) or Java ginger (Curcuma xanthorrhiza) or curcumin, a biologically active phytochemical or combination with fennel oil was found to be beneficial, improved patient QoL (due to myorelaxant effect towards the intestinal muscle, involves not only the cholinergic receptors, but also L type Calcium channels) but not statistically significant in IBS symptoms (compared with placebo) [50,71-80]. Enzymes comprise the endocannabinoid system in intestinal pain and motility in IBS is also claimed [81] but no significant difference found with dronabinol/ nabilone (synthetic compounds containing cannabinoids found in the marijuana plant) [82-86]. Aloe Vera found to be improved QoL with insignificant/no severity symptom reduction in several studies [87-94] and studies show its carcinogenic potential in the colon [90,95-98], nephrotoxicity and hepatotoxicity [95,99-104] which surely demands very limited use unless necessary. Zingier officinale also showed limited potential in symptom management [105-108]. Mixture of Boswellia carterii, Zingiber officinale, and Achillea millefolium improved QoL in men but not in women [109]. Although, an earlier study with Mentha longifolia, Cyperus rotundus and Zingiber officinale combination showed significant improvements after 8-weeks of treatment [110]. CAM for IBS include hypnosis, acupuncture, cognitive behavior therapy, yoga, probiotics, meditation, and herbal medicine [12,19,50,111-113]. Yan et al. [114] & Wu et al. [115] and few other studies reported efficiency and safety of acupuncture alone or combined with Moxibustion or other CHM in IBS [12,114-126]. Like zingiber officinale and Curcuma longa, Fumaria officinalis, Hypericum perforatum, Plantago psyllium and Carmint (Mentha spicata, Melissa officinalis, Coriandrum sativum) do not have significant efficacy or at least similar efficacy as placebo is also reported [50]. CHM like Sishen Wan, Ma Zi Ren Wan, CCH1 (patented, modified herb formula), Hemp seed pill, Jianpi Tiaogan Wenshen Recipe (JTWR), Chinese Medicine syndrome-differentiation therapy, Yun-chang capsule, plantain-senna granule (CPSG), Tongxie Yaofang (TXYF) Granule, Changjishu soft elastic capsule, Tongyouqing and many more showed potentials in IBS [127]. The emerging role of braingut therapies in IBS are visible. Cognitive behavioral therapy (CBT) and gut-directed hypnosis are the primary behavioral interventions that are introduced to patients with gastrointestinal conditions [128]. IBS involves dysregulation of the brain–gut axis and psychological processes play an important role in the development and maintenance of the disorder [129]. Gut-focused hypnotherapy was found to be effective in primary and secondary care [130-133], but only small changes were found in intestinal microbiota composition [134]. CBT-IE for IBS includes exposure to abdominal sensations in addition to psychoeducation, self-monitoring, cognitive restructuring, attention training, and in vivo exposure, which are often used in traditional CBT [135]. Home-based version of CBT produced significant and sustained gastrointestinal symptom improvement for patients with IBS compared with education [136]. Both web/phone-delivered CBT and home/clinic-based CBT was found to be effective than usual treatment in refractory IBS, resulted in substantial and enduring relief of multiple symptoms [137,138]. Although significant for both outcomes, the statistical analysis revealed CBT interventions have a greater effect on alleviating IBS symptoms severity rather than on reducing psychological distress [139]. Emotional stress exacerbates IBS symptoms, and mind-body interventions may be beneficial. Exercise (yoga, walking/aerobic physical activity, Tai Ji, mountaineering, and Baduanjin qigong activity) is potentially a feasible and effective treatment for IBS patients [140]. Yoga improved sleep increased visceral sensitivity and reduced abdominal pain in teens [141], adolescents and young adults [142], women [143] and postmenopausal women [144]. Patients with irritable bowel syndrome might benefit from yoga and a low-FODMAP diet, as both groups showed a reduction in gastrointestinal symptoms [145]. Low-FODMAPs, ketogenic glutenfree diets are considered therapeutic [146-150]. However, there are gaps in implementation of the low FODMAP diet in clinical practice, as well as long-term safety and efficacy [151]. A low FODMAP diet is only recommended as a second line treatment guided by qualified clinicians with specialized training [152]. Dietary sources fibers include oats, psyllium, ispaghula, nuts and seeds, some fruit and vegetables and pectins. An increase in fiber has often been suggested as an initial treatment for IBS [153]. 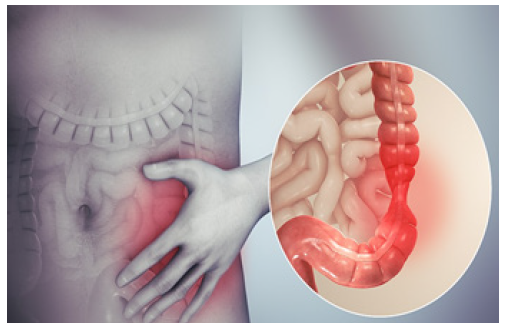 Figure 1: Irritable Bowel Syndrome [1-4]. IBS is a disease representative of FGIDs in which abdominal pain and discomfort associated with abnormal bowel movements chronically persist and recur. These symptoms are known to be related to lifestyle habits, such as meals and stress. It has been reported that 50% to 90% of patients have or had at some point one or more common psychiatric condition, including major depressive disorder, generalized anxiety disorder, social phobia, somatization disorder, or posttraumatic stress disorder. A survey by the Gastrointestinal Society in Canada showed that nearly 50% had missed work or school due to IBS symptoms. In the US, Canada, and Israel, IBS symptoms are 1.5 to 2 times more prevalent among women than men. Moreover, women are more likely to report abdominal pain and constipation whereas men are more likely to report diarrhea.

There is strong evidence to support three mechanisms of action:

a) Augmentation of small intestinal fluid

I’m thankful to Dr. Elshazaly Saeed F.E.H. Elhassan, King Saud University, Saudi Arabia for his precious time to review my literature and for her thoughtful suggestions. I’m also grateful to seminar library of Faculty of Pharmacy, University of Dhaka and BANSDOC Library, Bangladesh for providing me books, journal and newsletters.