Preparation of a concentration gradient of drug candidate is a prerequisite to study cell-drug interaction quantitatively. Currently, this step is manually operated in the laboratory, which is labor intensive and annoying. Automation is desirable in practice. Derringer et al. developed an automatic method to generate concentration gradient [1], and Ye et al. [2] used this method in drug screening [2,3], however, this method was only applicable in microfluidic device, not in 96-well or 24-well plate, thus its applications were limited. Previously, we established drug screening device based on biomedical engineering methods [4]. In this study, we developed a method to generate concentration gradient in plate automatically, using normal commercial ink-jet printer and WORD software. We also used the same printer to print the cell suspension, thus we finally developed a drug screening assay based on hot ink-jet printing. Hot ink-jet printing technique is useful for printing cells in biomedical engineering. It works by the principle in which the heating element turns the “biological inks” into bubbles at bottom of the nozzle instantly and the pressure generated makes a certain amount of inks free from the surface tension there and pushed from the nozzle. As an approach for cell printing, hot ink-jet printer has been used in tissue engineering [5], biological microarray construction [6], stem cell research [7] and gene transcription [8]. However, there are few reports in its application in drug screening at cellular level

In this paper, a hot ink-jet printer was custom-modified as an automatic dispensing tool for the engineering of cell arrays and generation of concentration gradient of drugs in a 24-well plate. By means of this apparatus, cell/drug composite arrays can be automatically generated for drug screening. RGB value was used as the output gauge of drug concentrations for the first time. A Mcf-7 cell/5-fluorouracil composite array was engineered to demonstrate the applicability of the hot ink-jet printer in the drug screening.

Modification of the Printer and the Cartridge

A Canon PIXMA ip 1980 hot-injet printer was modified as follows the front cover, paper support, rear tray, paper thickness lever and paper guide were dissembled sequentially while cartridge holder and paper sensor being kept intact. The printer after modification was shown as in Figure 1 (left part). Before use, the body of the printer was sterilized and kept inside an ultraviolet-lighted laminar hood overnight. A Canon PG830 ink box was modified as follows: after the top cover of the ink box was ripped from the main body of the box, the sponge inside the ink box was discarded and the metal filter at the bottom of the box was dismantled with the ink reservoir exposed, followed by a thorough cleanup. The ink box after modification was shown as in Figure 1 (right part). Prior to use, the box was emerged in 75% ethanol and air dried in a laminar airflow, followed by being exposed with ultraviolet light for at least 30 mins. 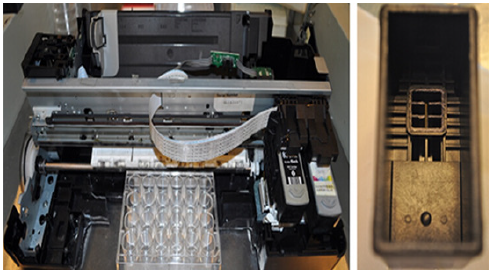 Printing Concentration Gradient of 5-Fluorouracil in the 24-Well Plate

10ml 8mg/ml 5-fluorouracil solution was precisely obtained when 0.08g 5-fluorouracil was dissolved in PBS solution in a 10 ml volumetric flask and filtered through a 0.22 μm diameter membrane to remove possible bacteria. This working solution was loaded in the ink box. The printing pattern was designed in the WORD software with designated RGB values. Clicked the “print” button in the WORD software and the concentration gradient of 5-fluorouracil was automated created in the 24-well plate within 5s. We collected the drug solution printed in each well and analyzed their concentrations with HPLC. In a typical setup, a SB-C18 HPLC column (4.6mm diameter, 250mm long) was used and the sample was detected by ultraviolet absorption with a single wavelength of 265 nm. The temperature of the column was set at 35℃. The volume of each sample was 10 μl and the mobile phase was made of methanol and water (5:95) with a flow rate of 1.0ml/min.

Preparation and Printing of Cell Suspension

Mcf-7 cells of the third generation with a high viability was chosen as the main raw material for preparation of the cell suspension. Prior to being loaded into the ink box, a Mcf-7 cell suspension were prepared by pancreatic digestion, centrifuging, collection, counting and re-suspending. The Mcf-7 cell suspensions were prepared at four different concentrations, 3×106, 6×106, 9×106 and 1.2×107/ml. Following the pattern of a round spot with the diameter of 5 mm, the cell suspension with different densities were printed into a 24-well plate with the modified printer as above. Observation was made with an inverted microscope equipped with a X4 zoom objective.

400 μl 10% NCBS culture media was added into the plate loaded with the printed Mcf-7 cells to keep their viability. And 10μl 0.4mg/ml Hoechst 33342 solution was added into the plate at 37℃ for 35mins in the dark, followed by the addition of 10 μl 0.2mg/ ml PI solution for another 10 mins. Then the cell suspension in the plate were collected and centrifuged. The cells from the bottom of centrifuge tube were collected and washed with PBS solution for 3 times. Then the cells washed were re-suspended in 1 ml cell culture medium to form a new cell suspension. 20μl new cell suspension was pipetted out and added dropwise onto a cell counter. Counting of cell number and observation of cells were conducted with an inverted fluorescence microscope with a X 10 zoom objective.

Mcf-7 cells with a high viability was selected for construction of cell/drug arrays. The Mcf-7 cell suspension were prepared by pancreatic digestion, centrifuging, collection, counting, and resuspension with a concentration of 9×106/ml. The Mcf-7 cell suspension was loaded into sterilized a PG830 ink box and printed into 5-mm-diameter round spots in a 24-well plate to form a Mcf-7 cell array. 400μl 10% NCBS culture media was immediately loaded into the plate. After being cultured at 37℃ under 5% CO2 for 24hrs, 8 mg/ml 5-fluorouracil solution were printed into the plate which were already loaded with Mcf-7 cells, with different RGB codes. As a result, cell/drug composite arrays (n=3) were formed. After being at 37℃, 5% CO2 for another 48 hrs, 40μl 5mg/ml MTT solution were loaded into the plate and incubated at 37℃ for 4hrs. Then the supernatant was discarded and 500 μl DMSO was added. The plate was shaken for 15mins to achieve DMSO thoroughly dissolved. Then 200 μl supernatant was collected and transferred into a 96-well plate and the adsorption under 490 nm wavelength was recorded.

The printing pattern was designed in WORD software, as shown in Figure 2. Each round spot, corresponding to a well in 24-well plate in location, was 5mm in diameter. These round spots varied in RGB values. We printed drugs following the pattern in Figure 2 and measured the concentration of drug in each well. We plotted the drug concentration in each well, as shown in Figure 3. This technology has five advantages compared to manual method

a) It is automatic;

b) We can obtain arbitrary concentration gradient by customizing the RGB values (Figure 3 A-D);

d) It is fast, and a concentration gradient can be generated within 5s;

e) THE hot inkjet printer was cheaper than a micropipette which is used for manual preparation. (Figure 2) 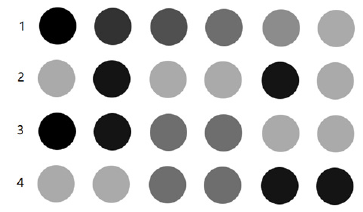 Figure 2: The Printing Pattern Designed in The WORD Software. 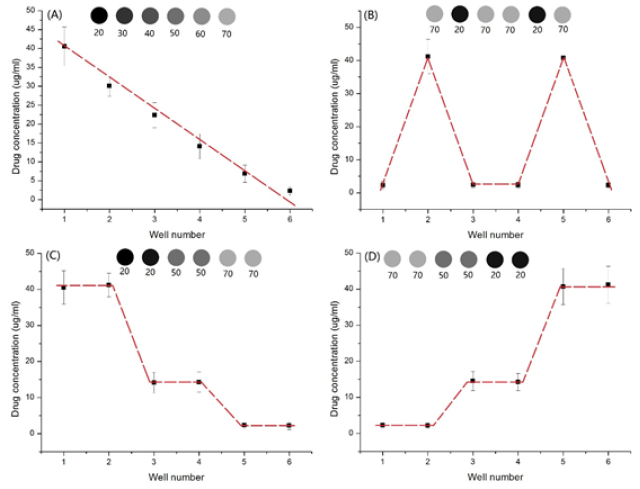 Figure 4: The Bright Field Images of Printed Round Spots of Mcf-7 Cells with Varied Cell Concentration.

After counting, the average number of cells in each round spot in the cell array was 3×104. After printing, the viability of the cells was the main gauge which reflects the validity of the cell printing process. Hot ink-jet printing was suspected to cause heat damage or mechanical damage on cells [8]. Hoechst33342 is a membrane permissive dye and emits blue fluorescence under 350 nm excitation after combining with DNA in cells. And PI is only capable of penetrating into dead cells. After PI combines with DNA in cells and emits red fluorescence under 543 nm excitation. Therefore, we can investigate the viability of cells when coupling Hoechst33342 and PI dyes after cell printing. As seen in Figure 5, the number of dead cells which emit red fluorescence is negligible and it supports that the negative effect of our cell printing technique on the viability of printed cells can be ignored (Figure 5).

Drug Screening Assay Based on Printing

a) High precision, cells can be precisely localized and distributed in three dimensions [9];

b) Rapid speed, tissue samples with biological viability can be constructed in a short time;

c) High automation grade, it has the possibility to be industrialized at a large scale [10];

d) Simple to be established and operated, it is straightforward to be modified or upgraded [11].

In our experiment, RGB tuning was used for controlling the output doses of 5-fluorouracil and the hot inkjet technique was adopted to build cell/drug composite arrays. And the viability of the cells in the composite arrays were evaluated. Inspired by the model from Boland ‘s group [11,12], a Canon hot inkjet printer and an ink box were successfully modified into a biological printer. And a Mcf- 7 cell suspension with a concentration of 9×106 cells/ml showed the best printing performance in cell distribution and density on the array. The printed cell array demonstrated patterns with the most complete morphology. By testing the concentration of drug solutions with HPLC, we were able to identify the concentration of 5-fluorouracil on the printed matrix produced from different RGB code value. The results show that high-definition Mcf-7 cell arrays can be constructed with our modified printer and ink box. And moreover, the concentration of 5-fluorouracil arrays can be tuned by changing the RGB color code value. The viability of cells by printing is the major indicator for the feasibility of the printing operation. We used Hoechst33342 and PI to dye the printed cells and applied excitations of 350 nm and 543 nm, respectively. The results showed that hot inkjet printing has little damage on the Mcf-7 cells, and they are in consistency with the literatures [13,14]. Also, we used MTT method to identify the inhibition rate of 5-fluorouracil on Mcf- 7 in the cell/drug array. When RGB code value was 30, the dose of the 5-fluorouracil was 30.09±2.69 μg/ml with a relative inhibition rate of 49.02%. These results supported the feasibility of applying the cell/drug printing method in investigating in vitro cellular viability and it provides new possibility of drug screening based on biological printing.

In this study, we developed an automatic method to generate drug concentration gradient in 24-well plate based on hot inkjet printer. The total time was less than 5s. Arbitrary concentration gradient can be easily generated by RGB coding. The cost of printing equipment was very low. This method is expected to make drug screening experiment more user-friendly.