The aim of this study was to evaluate the prevalence of the disease in camels in Tambool area, Sudan with emphasis on the number and stages of cysts in different organs. The investigation revealed 21.3% prevalence rate among camels.

Echinococcosis or hydatidosis is a cyclozoonotic disease of worldwide importance caused by the closely related cestode parasites, Echinococcus granulosus and Echinococcus. Multilocularis [1]. The disease has a particularly high incidence in countries where the association between man, dog, and farm animals is close [2,3] described the disease as a medical and to a lesser extent, an economic problem in the inhabited continents. Cystic echinococcosis (CE) is a zoonotic disease affecting various species of livestock and humans. It is distributed worldwide, acquiring public health or economic significance in areas where extensive livestock production provides suitable condition for the cyclic transmission between dogs and livestock animals. CE is considered an emerging neglected disease in many parts of the world; in some regions re-emerging after initially successful control [4,5]. Hydatidosis in camels was first reported in the Sudan in 1908 [6,7] subsequently reported a high prevalence of the disease among camels especially in areas where they are slaughtered in large numbers, like Tambool area. Echinococosis or hydatidosis reported with economic zoonotic helmenthic disease of the tropic equatorial regions of the world [8].

It is a cross-sectional study.

The field work was conducted in Tambool area (Central Eastern Sudan) where slaughtered camels were checked for hydatid cysts. Laboratory work was performed at the laboratories of the Faculty of Education,

Alzaem Alazhari University and the Faculty of Education, University of Khartoum.

The study included camels slaughtered at Tambool market. One hundred fifty slaughtered camels in Tambool market were thoroughly inspected for the presence of hydatid cysts in different organs. Hydatid cysts, when found were counted. The size of the cysts was measured using an ordinary ruler. Aspiration of cyst fluid was made for detection of fertility or sterility status of the cysts.

For the size of hydatid cyst, four groups were categorized as follows:

A. Small (diameter below 2 centimeters).

The status of the cyst fluid was evaluated visually by observing the consistency of the fluid. Accordingly, the fluid was described as clear (watery), turbid or caseated (cheese-like)

According to the stage of the cyst, cysts were divided into:

A. Fertile cyst (fluid with scoleces).

Fertility of collected cysts was determined using the folowing

One drop of each hydatid fluid was placed on glass slide and covered with cover slip. The slide was examined under the light microscope using the objective lens10x for the presence of the scoleces.

Out of a total of 150 heads of camels examined in Tambool area, 32(21.3%) were seen to be infected with hydatid cysts (Table 1). The 32 infected camels showed 114 cysts in the lungs, 21 cysts in the liver and one in the spleen. The most frequent predilection site was the lung and then the liver. Cysts in the spleen were found only in one case.

Table 2:Sizes of cysts encountered in organs of the infected camels. Figure 1:Sizes of cysts encountered in organs of the infected camels. 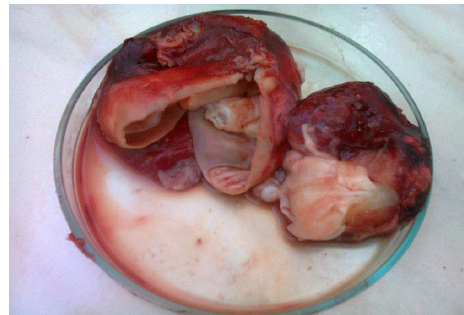 Figure 2:Cysts in a lung (right) and a liver (left) obtained from the infected camels.

Table 3:Stage of cysts encountered in organs of the infected camels. 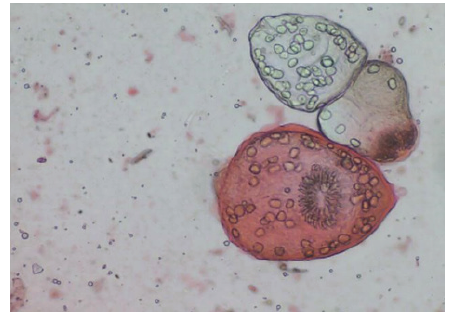 Figure 3:Protoscoleces in a lung obtained from the infected camels. 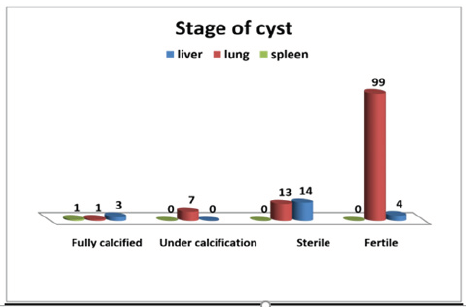 Figure 4:Stage of cysts encountered in organs of the infected camels

The pattern of livers and lungs with one cyst each was similar as 3 lungs were seen with one cyst and 12 livers as well. In organ with 2-4 cysts, the picture was different. 20 lungs and 6 livers were observed. Organ with 5-10 cysts was seen in 9 lungs. The only spleen that was affected had only one cyst (Table 4, Figure 5).

Table 4:Cyst per organ per animal encountered in organs of the infected camels. 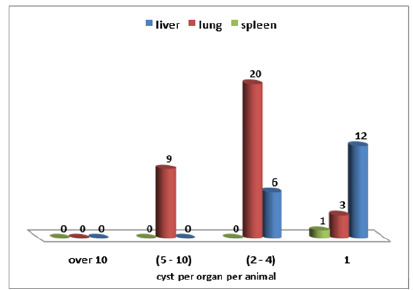 Figure 5:Cyst per organ per animal encountered in organs of the infected camels.

Distribution map of hydatid disease like that described by Cameron and Webster [9], suggests that the disease is rare or absent over much of tropical Africa. But, as shown in Table 1, it is obvious that, far from being rare, hydatid disease in domestic animals in the Sudan as part of tropical Africa is more prevalent .This agrees with the findings of French and [10,11] who described fully this serious problem among the Turkana tribe in northern Kenya .The seriousness of infection among man and animals (both domestic and wild) in that part of Africa justified the establishment of a hydatid research unit in the area.

In the present study, 150 camels were examined at meat inspection. The overall prevalence rate of hydatidosis in Sudan varies with the variations of the number of animals slaughtered in different part of the country. As shown before, cattle and sheep are slaughtered in all areas investigated. Camels are slaughtered in relatively large numbers in Tambool and Elfasher. Goats are not favored in most of the areas investigated; therefore, the number of goats examined was comparatively small, but it is hoped to give a representative profile for measuring the prevalence and fertility of hydatid cysts.

In the investigation of [12], only two fertile cysts were observed in sheep. All other cysts detected were calcified or under calcification. This may be since sheep brought to legal slaughter are rather old; younger ones usually kept for illegitimate slaughter

Investigation of the disease in camels revealed that at Tambool, 43.9% of the carcases examined were infected, size of cyst was shown to reach up to 9.5 cm and its fertility rate was high. Infrequently, some organs were found to be heavily infected. For example, 26 cysts were encountered in one lang. This may ascertain the important role of camels in the cycle of the parasite as previously mentioned by [12].

In some parts of the Sudan, because of the dry and warm climate, camels constitute domestic animal and livestock found in close contact with dogs which might explain such high prevalence of hydatid cysts in camels. Because animals have more chances in contact with infected dogs, it is not surprising to find higher infection among them. Despite that the camel is considered a browsing animal, the high infection arte in Tambool area may be explained by the fact that camels feed on “Nal” (grasses used for roofing rooms in rural areas). This “Nal” is subject to contamination with dog feces. Another reason justifying this high infection is that the nomads after slaughtering a camel throw all the organs except the liver to their dogs. Thus, helping in the transmission of the infection. When nomads settle somewhere, they keep their dogs with their camels at the same place. Thus, disseminating the infection to their own camels.

As mentioned by [12], the importance of camels in the cycle of the parasite has been proven in Egypt where [16] considered them to be the top reservoir hosts of infection in Egypt and buffaloes comes in second order. According to Saad [12] findings, it is thus apparent that camels and cattle throughout Sudan are commonly infected with hydatid cysts and that as far as the data collected is concerned, they are the major intermediate host which transmit the infection to the definitive and the disease passes either directly or indirectly to man.

As has been shown in the result, calcified and under calcified cysts were mentioned. In fact, these cysts may be important in defining the prevalence quantitatively but, they will not have any impact in the life cycle and epidemiology of the disease. As far as the epidemiology of the disease is concerned, one may be interested in the proportion of the infected population that carry fertile cysts and can therefore play an important role in the transmission of the disease. These results agreed with those shown by [12].

Our finding that the lungs of camels were found to be more commonly infected with hydatid cyst than the livers is in agreement with a previous finding of [17] Ibrahim and Craig [22].This might be due to the fact that camels are slaughtered at older age, during which period the liver capillaries are dilated and most oncosphere passed directly to the lungs; additionally it is possible to the Echinococcus oncosphere to enter the lymphatic circulation and be carried via the thoracic duct to the heart and the lung in such a way that the lung may be infected before or instead of liver as observed by [18].

overall percentage of fertile cyst in this study was 96.1% in the lungs. Various surveys throughout the country have indicated that high cyst fertility rate is commonly found in camel [5,15,20,21,25] hence, they are potential sources of infection to dogs. The difference in fertility and the proportion of variable protoscoleces from fertile cyst may be related to the difference in immunological response per host, Moreover, the fertility of hydatid cysts in the intermediate hosts may be also genotype dependent [19].

In comparison of the fertility rate among the organs, it was higher in lungs than livers and spleen. It has been stated that the relatively softer consistency of lung tissue allows the easier development of the cyst [20] whilst the viability rate of protoscoleces of liver fertile cysts was significantly higher than that of lung cyst and spleen ones, respectively. This agrees to the finding of [17] in camels slaughtered in Iran. He reported that the fertility of cyst in the lung (69.7%) of camels in Iran was higher than that in the liver (58.7%) and spleen (50%). Whilst the viability rate of liver fertile cysts (80.3%) was higher than that of lung (55.8%). Furthermore, the greater prevalence and higher fertility rate of pulmonary cysts over hepatic cysts of camel indicate the importance of each internal organ as a potential source of infection to dogs. In E. granulosus endemic areas of Iran, it is evident that, the majority of E. granulosus infected livestock animals can potentially act as reservoirs of human infection [21-27].