A bioassay trial was conducted to determine the efficacy of developed product, Pondguard as an anti-Acute Hepatopancreatic Necrosis Disease (AHPND) candidate. The Pondguard (Registration no. D 16060285-HBC) is consisting of natural oils, like, lavender oil, Eucalyptus oil and Pine oil. It maintains the immunity level of shrimp, which helps to protect shrimp from infectious diseases. Two doses of Pondguard i.e. 40 ppm and 80 ppm were selected for the trial. The treatment groups tanks were applied Pondguard whereas no application in control tanks throughout the experiment. The shrimp of both treatment and control were challenged by immersion method. The cumulative mortality reached up to 56.7% in positive control whereas 23.3 % in 80 ppm pondguard group and 13.3% in 40 ppm pondguard group at dpi 8 whereas no mortality recorded in negative control. The Relative Percent Survival of 80 ppm group was 64.7% and of 40 ppm group was 76.5%. The trial results show that the developed Pondguard has significant effect against AHPND-Vibrio parahaemolyticus in a controlled condition.

The Acute Hepatopancreatic Necrosis Disease (AHPND) or Early Mortaliy Syndrome (EMS) have been reported in several shrimp producing countries, like, Vietnam, Malaysia, Thailand, Mexico and in Philipines [1-5]. There is significant impact on the world shrimp production [1,6], were successfully able to identify and isolate the causative agent Vibrio parahaemolyticus of AHPND. The unique symptoms and characteristics of this disease include severe atrophy of the shrimp hepatopancreas (HP) consisting of massive sloughing of HP epithelial cells [1]. The external symptoms in infected shrimp like, empty stomach, bluish body color and shrunken hepatopancreas, could be observed in the outbreak ponds. AHPND could transmit experimentally by horizontal transmission, co-habitation, immersion and by reverse gavage (Personal observation).

The AHPND appear in the culture ponds from 8-45 days of stocking. The shrimp cultured in earthen bottom ponds were reported more susceptible to AHPND as compared to the HDPE-lined ponds. The proposed trial was designed with the objective to conduct a laboratory scale trial by applying the developed anti-AHPND product i.e. Pondguard to determine its efficacy against the AHPND causative agent. The pre-determined doses, 40 ppm and 80 ppm were used to conduct the trial. The bioassay trial was conducted by the researchers of Department of Aquaculture and Fisheries, Cantho University, Cantho, Vietnam.

White leg shrimp larvae (PL10) were spawned and nursed to 0.5 to 1g/individual (size most affected by AHPND) in recirculation system at shrimp hatchery and nursery of College of Aquaculture and Fisheries, Cantho University, Vietnam. Prior to being distributed to experimental aquarium, three shrimp samples were screened by PCR for Infectious Hematopoetic and Hypodermal Necrosis Virus, White Spot Syndrome Virus, Monodon Baculorvirus. Taura syndrome Virus. Vibrio parahaemolyticus causing AHPND and Enterocytozoon hepatopeanaei to ensure shrimp were free from those specific pathogens. Experimental shrimp were in good health prior to being distributed to experimental aquaria. Moulting shrimp were removed prior to start of feeding and prior to challenge. Prior to start of Pondguard application and prior to challenge, weight and length of 30 shrimp were measured. Prior to start of trial, the average weight was 0.5 g and average length was 4.33 cm. Prior to challenge average weight was 1.4 g.

Glass aquaria (30 L in volume) were used to set up the trial. Each aquarium contained 25 L of seawater (15‰) with continuous aeration system and temperature was maintained around 26-30°C. Experimental shrimp were stocked with the density of 40 individuals/ aquaria (before challenge) and 15-20 individuals/aquaria (on challenge). The treatment and control groups were reared in 2 different rooms. The distance between two rooms was about 30 meters.

The CP Prima, Indonesia for the trial, provided feed. The proximate composition of both feeds was the same. The feeding rate was 7% of MBW and the feeding frequency was 4 times/day (at 7AM, 11AM, 1PM and 7PM) throughout the trial period

The CP Prima, Indonesia for the trial, provided Pondguard. The Pondguard is consist of Natural oils, like, lavender oil, Eucalyptus oil and Pine oil. It maintains the immunity level of shrimp, which helps to protect shrimp from infectious diseases. The Pondguard is registered under Ministry of Aquaculture, Indonesia with Registration no. D 16060285-HBC. The different concentration of Pondguard (40ppm, 80ppm) was applied to obtain the best dose to act against AHPND. The dose of Pondguard for the current trial was determined on the basis of previous study trial outcome. The determined dose of pondguard was started applying two days prior to challenge. It was applied on daily basis throughout the trial period.

The bacterial strain used in this study was designated V36. This strain was originally isolated from shrimp diagnosed with AHPND histopathology (Strain was isolated from diseased shrimp collected in Soc Trang province in September 2016). Strain was stored at -80°C in TSB supplementing with 1.5% NaCl and 25% glycerol. The bacteria were identified as V. parahaemolyticus by green colonies on TCBS. Conventional API 20E biochemical tests and PCR with LTH primers [7]. Additionally, the isolate was positive on PCR with AP3 primers [8].

Bacterial culture were grown 24 h in TSB supplementing with 1.5 % NaCl at 28°C. Based on the standard curve determined for the strain. The OD corresponding to 108 cells ml-1 was diluted in seawater. Immersion method of challenge was applied in the experiment [9]. Shrimp were immersed for 15 minutes in this bacterial culture with continuous aeration and then both bacterial solution and shrimp were transferred to aquaria containing seawater reducing the bacterial concentration to 106 cells ml-1. No water was exchanged for 48 hours after the challenge. Then 30% of water was renewed every 2 day.

Set up in 4 groups with 25L water. Challenge with V36 strain and added test products as detail in Table 1. Clinical signs observation and recording were followed up for 7 days post challenge.

Table 1:Experimental set up to test the response to AHPND of juvenile shrimp Penaeus vannamei treated with CPP product Pondguard.

Cross-contamination of bacteria between tanks was avoided by covering the tanks and assigning separate equipment to tanks. Monitor water quality. Siphoning and water exchange 30% every 2 day. Clinical follow-up 2 times per day

2. Severity and time of onset of clinical signs

The gross sign started recovering after day 4-5 of challenge in the groups. Summary of gross sign at 7 days post challenge are compared and presented in Table 2.

All the challenged tanks showed presence of vibrio bacteria in the water after challenge. The pick count recorded at 6 hours and then reduction of vibrio at 24hr interval. The water samples were collected from 2 tanks each of Pondguard tanks, all three tanks of Positive control and 1 tank of negative control groups (Table 3). 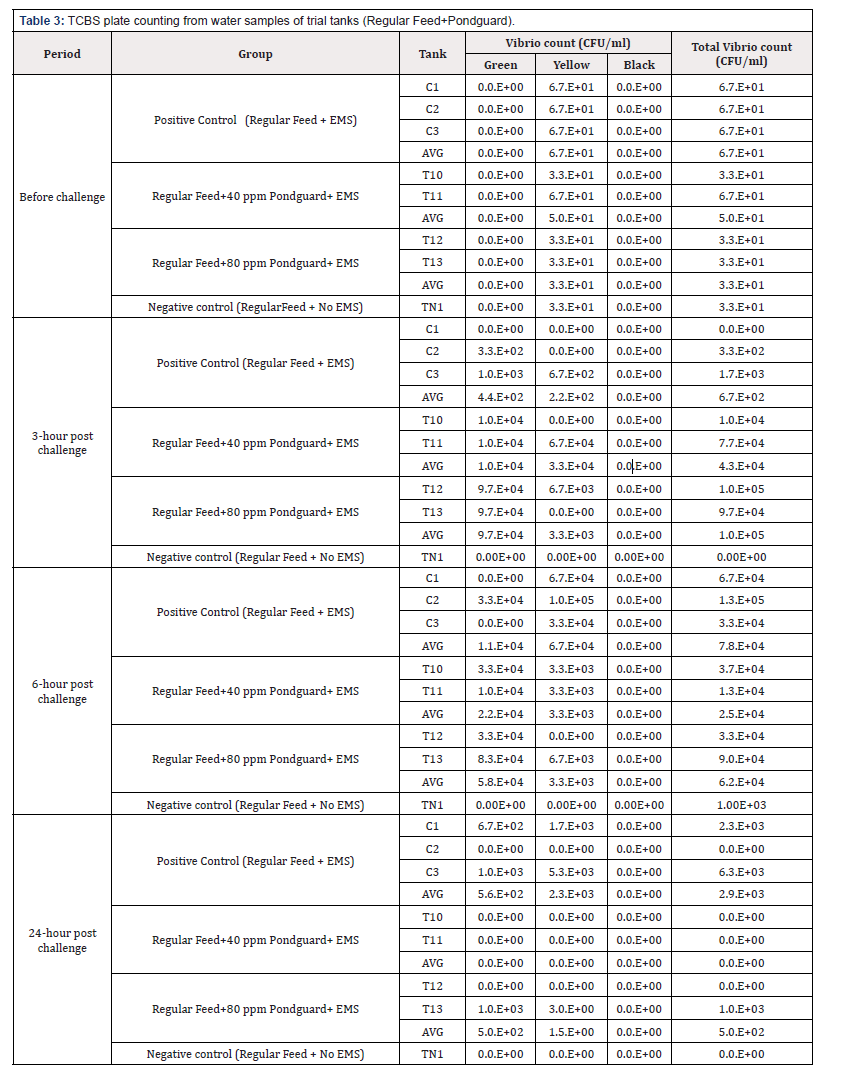 Before stocking to the aquarium, three shrimp samples were screened by PCR for Infectious Hematopoetic and Hypodermal Necrosis Virus, White Spot Syndrome Virus, Monodon Baculorvirus. Taura syndrome Virus. Vibrio parahaemolyticus causing AHPND and Enterocytozoon hepatopeanaei to ensure shrimp were free from those specific pathogens. Sample of hepatopancreas and stomach were collected from moribund shrimp for PCR (Vibrio parahaemolyticus causing AHPND) was taken on day 2 after challenge (48hour after challenge). All the treatment groups samples detected positive to EMS. The negative control (Not challenged) samples detecetd negative to EMS. Strain 13-028/A3 was determined to cause this disease through laboratory bioassays [6] (Figure 4). 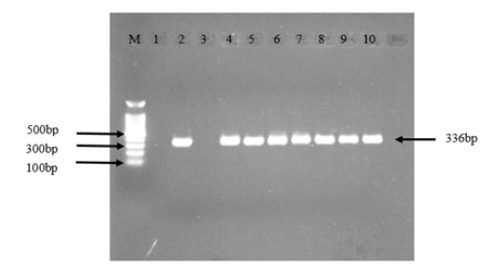 The dose 40 ppm has shown better Relative percent survival value. There is 100% reduction in green Vibrio within 24 hours of challenge in the presence of Pondguard. The developed natural oil formulated product, Pondguard, has shown potential to be claimed as anti-AHPND/EMS product on the basis of lab scale trial.

The obtained laboratory results states that in a controlled environment Pondguard containing natural oil extracts provide prevention against AHPND. The treatment shrimp that challenged with AHPND/EMS V. parahemolyticus showed lower mortality rate as compared to positive control group. Furthermore, the obtained results and analysis gave a clear indication that we have identified a solution to combating EMS outbreaks in a controlled environment. The AHPND gross-sign appearance in the challenged shrimp was similar and as described by [6,10-12]. The rate of mortality in the challenged group was similar to the field reports i.e. heavy mortality for 3 to 5 days with significant drop in feed intake. The bioassay challenge trial conducted by [6] received the similar rate of mortality as recorded in the positive control of the current trial. The herbal origin products have proven to be anti-bacterial and anti-viral properties [13-16]. The next step would be conducting a field trial in the culture ponds [17-21].