Treatments in the field of cancer are continuously improving. No matter which model is used, using animal models in drug development research has become a necessity. Although cell culture and molecular biology have become prominent in recent years, the responses of metabolism to the drugs used have necessitated the use of an animal model in research. The use of spontaneous or transplanted tumors with chemical carcinogens is common in experimental cancer studies. In recent years, with the introduction of transgenic animal models, scientific and commercial developments are taking place. In this article, we will examine the methods used in experimental cancer models.

Cancer is an increasingly important health problem all over the world and causes both material and moral losses for people [1]. Diagnosis of cancer causes psychological problems and medical interventions applied throughout the process may adversely affect the lives of patients [2]. Decrease in quality of life, psychological problems, especially depression and anxiety are mostly experienced [3].

Cancer is a disease that accounts for a significant proportion of deaths worldwide, despite significant advances in medical technology for its diagnosis and treatment [4]. Commonly used treatments for cancer treatment are chemotherapy, radiotherapy and surgery [5].

In general, after the diagnosis of cancer, the effects of the stages during and after treatment are evaluated separately [6]. Studies for the newly diagnosed cancer stage vary. In experimental studies, experimental animals are frequently used for clinical observations [7-8]. In animal experiments for cancer treatments, often plant extracts have an important place in research [9, 10, 11].

Lymphatic leukemia is induced by administering 3-methylcholanthrene (20mg/kg) to DBA/2 mice intraperitoneally. This method was first used in 1955, and until 1970, more than 400 thousand compounds were tested with the P388 Leukemia model. P388 leukemia tumor formed in DBA / 2 mice can be passaged by intrapertonal administration to CD2F1 mice as 1x10 6 cells in 0.1 ml suspension.

When DBA / 2 mice are administered intraperitoneally in 3-methylclonathrene (20 mg / kg) ethyl ether, the lymphoid is formed. This method has been used since 1948. The potential for tumor formation is very high. As in the P388 Leukwmi model, CD2F1 mice can be passaged by intraperitoneal administration. 0.1 ml suspension contains 1x10 5 cells.

It is a mammary gland-derived tumor, especially in Spraque Dawley rats, by thesis dose administration using dimethylbanz (a) anthracene (DMBA) of polycyclic hydrocarbons 7,12. Female rats aged 8-10 weeks are administered by gavage by dissolving in 1 ml of sesame oil, corresponding to 12-20 mg of DMBA per animal. This method, which shows good adhesion with respect to the dose, is a useful method to evaluate the effects of anticancerogenic agents. However, 60% of the model created by DMBA application is carcinoma and 40% is benign fibroadenoma.

DMH (1.2 Dimethylhydrazine) is a column-specific carcinogen and a toxic chemical that pollutes the environment. When 20 mg / kg DMH in 1 ml EDTA is administered by subcutaneous injection to the groin area, a model of cancer similar to colon cancer in humans is formed. 32. Adenocarcinoma structure is seen at histopathological examination at the end of the week.

After intraperitoneal injection of 100 ppm N-methyl-N-nitro- N-nitrosoguanidine (MNNG) into 6-week-old rats, MX Furanone is added to the animals by adding 30 ppm of drinking water. Adenocarcinoma type cancer model emerges after 57 weeks of application. Increased cell proliferation in the gastric mucosal epithelium and atypical hyperplasias in the pylori are seen.

It can be derived from suspensions obtained from spontaneous tumors. They show kinetic similarity to human cancer types. It also plays an important role in the development of chemotherapeutic drugs in understanding the biology of carcinogenesis. Solid tumors are transplanted intraperitoneally, intramuscularly, subcutaneously and intravenously via cell suspensions. Tansplanted tumors are very similar to spontaneous tumors in terms of early formation phases. They are preferred in pharmaceutical studies.

EAT first appeared as a spontaneous breast adenocarcinoma in a female mouse, and Ehrlich & Apolant (1905) transformed the tumor into an experimental tumor by subcutaneously transplanting the mouse into the mouse. EAT is used as liquid form or solid form according to the purpose. If the ascitic fluid containing the tumor cell is injected intraperitoneally into the test animal, the ascitic form is injected subcutaneously and the solid form is obtained. (Figure 1) shows the cells of the acid form. 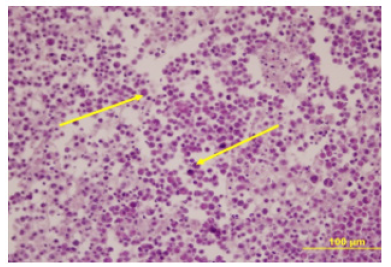 Solid form: Derived from Ehrlich Mouse Carcinoma, which was extracted from the mouse mammary gland in 1907 by Ehrlich and Apolant. It is a common tumor model currently used in mice. It has fast growth feature. Tumor cells are not of equal size and have a diameter of 20-30 microns. Cell suspension is applied subcutaneously to obtain solid tumor. When a 1x106 / ml cell suspension is injected subcutaneously, solid tumor is observed to be measurable at the end of 1 week. If the treatment is not performed, death is observed in mice within approximately 6 weeks (Figure 2). Liquid (Acid) Form: When 500,000 / ml cells were administered intraperitoneally to mice, it was seen that the tumor was in liquid form. Without treatment, deaths begin one week after tumor injection. If 2x106 / ml cells are injected, a tumor with a diameter of 1 cm occurs after 1 week. In smear preparations, it is observed that the cells belonging to the liquid form resemble the solid form cells. However, while the cell membranes of the solid form are not noticed, the membrane in liquid form is observed (Figure 3). a. Xenograft model: Tumor cells are transplanted to an area of the organ. This expensive and unusual method is used for in vivo evaluations of cytotoxic agents in the organ in lung cancer.

b. Orthotopic xenograft model: Intrathoracic implantation directly through the wig. There is a possibility that the suspension may escape the pleural area abdominal wall or lung parenchyma. In this model, the development of individualized treatment is very effective.

A wide range of animal models, all different because of the characteristics of the study can be selected depending on the purpose.

In the study of Ertekin et al. In one study, male 8-week-old Balb/C male colon cancer was performed with 1,2-dimethylhydrazine (DMH). As a result of the study, it was determined that combination of high dose angiostat with radiation, gene therapy or chemotherapy may be successful in cancer treatment. It was emphasized that further studies are needed to determine the antitumor effects of angiostatine [12].

At six weeks of age, Wistar Albino male rats were initiated with 100 ppm MNNG (N-methyl-N-nitros-N-nitrosoguanidine) in a 5% NaCl solution followed by MX (3-chloro-4), a mutagen for water. 57 weeks. - (dichloromethane) -5-hydroxy-2 (5H) -furanone) is administered at a dose of 30 ppm to produce gastric cancer [14].

Seher et al. studied the anti-tumoral structure of curcumin on the effect of solid and liquid tumors for Ehrlich ascites [16].

As a result, preclinical research is continuing in many fields such as cancer formation, development, metastasis, immune system response, cancer drug therapy and many researches are being done to solve the molecular and cellular structure of cancer. Which cancer type will be searched, which cell type to look for, whether there are genetic abnormalities Whether tissue is specific to a particular developmental time and tissue, whether spatial and temporal expression of a target gene should be controlled, the microenvironment of the tumor and the potential for metastasis should be considered.