Over the last few decades many athletes and coaches have used altitude training in various forms to help improve performance at altitude and/or at sea level. The traditional approach to altitude training was for athletes to live and train at moderate altitude. The effects of this form of stimulus on endurance performance have been researched extensivel [1]. A recent approach has been for athletes to live and sleep at altitude and train near sea level, the so-called live hightrain low (LHTL) method or the opposite live lowtrain high (LLTH) method, to live and sleep at sea level and train at altitude [2 & 3]. Because the geography of many countries does not allow LHTL or LLTH, other strategies have been developed for athletes, such as being briefly exposed to hypoxia. Intermittent hypoxic exposure with (IHE) or without (IHT) exercise training is based on the assumption that brief exposure to hypoxia (minutes to hours) is sufficient to stimulate EPO release, and ultimately increase red blood cell (RBC) concentration and to induce peripheral modifications in skeletal muscle that in turn might increase performance [2 & 4].

Altitude and hypoxic training are common among endurance athletes and recommended by many coaches for potential benefits during subsequent competition at or near sea-level. As altitudein creases, atmospheric pressure decreases, and although the fractional concentration of oxygen remains the same (20.9%), the partial pressure of oxygen decreases, reducing the amount of oxygen available for delivery to exercising tissues [5]. Like many different training strategies, not all individuals are expected to respond equally to training at altitude. Considerable variation in the individual response to altitude training has been documented both in terms of physiological variables such as red cell and Hb mass as well as endurance performance [6]. Individual differences in EPO production play a role in determining how RBC volume and Hb mass change in response to altitude and hypoxic training. [7] Plasma EPO concentration increases in RBC mass and total blood volume were found to differ between athletes who improved their 3 km run performance versus those who did not in a retrospective analysis [8]. With the above analyzes showing that the effect of exercise at high altitudes with no oxygen environment is not consistent with the viewpoint, athletes still use the simulated assumptions of elevation to improve Sports performance to achieve high performance. [9] Therefore n g porch this study empirically tested the impact of environment assumed elevation 2500m with POI 15.72% after 6 weeks with m Goals are modified indicators of physiological functions biochemical after 6 weeks of training Intermittent contact (IHT) with 90% lactate threshold The ability of aerobic and athletic performance of male sprinters well trained. 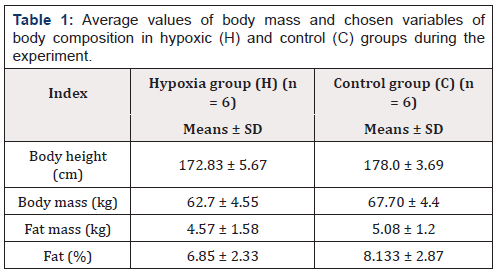 Table 1:Average values of body mass and chosen variables of body composition in hypoxic (H) and control (C) groups during the experiment.

Based on the scientific basis, professional characteristics and equipment system in the division of oxygen, the author builds a program running on the treadmill to apply to subjects studied for 6 weeks The effectiveness of the experimental program used in this study was similar for both groups of randomly assigned ( experimental and control ) athletes under two different training environment conditions: The group (H): There are 6 athletes training on the treadmill in the simulated Oxygen room at 2500m height with a percentage of O2 = 15.72%, a temperature of 210C, humidity in the range of 40-50%; The group (C): 6 athletes workout on the treadmill at the environment sea level percentage of oxygen is O2 = 20.93%, temperature and humidity, often depending on the weather.

The obtained data were analyzed statistically with the use of SPSS 20.0 and MS Excel 2016. Basic descriptive statistics were calculated, and all variables were examined for normal distribution. The level of statistical significance was set at p<0.05. To determine the impact of the exercise program as well as the 2.500m elevation simulation environment affecting the physiological and biochemical changes of athletes after 6 weeks of training. 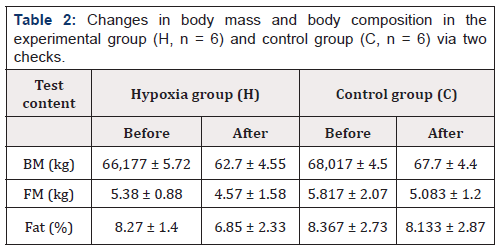 Table 2 shows the mean value, standard deviation changes in body mass and body composition of athletes both groups (H) and (C) participate in the study after 6 weeks. Table 3 shows the difference was statistically significant variation physiological and ability to absorb maximum oxygen elite male sprinters in aerobic activities. Table 4 shows the variation biochemical differences bring operational performance capability for endurance athletes (Table 2). Analysis of the BM of the two groups (H) and group (C) was different from baseline, in which body mass (H) reduced by 5.24%, the (C) 0.47% reduction not statistically significant compared to baseline, but the analysis between the two groups showed a difference between (H) and (C) 11.95% (p <0.05). Body compositions between the two groups were not significantly different, in group (H) FM decrease 15.16%, Fat decrease 17.14% compared with the original test and no significant difference statistically, and group (C) have decrease 12.62 %, Fat reduced 2.8 % compared with the original test and no difference is statistically significant (Table 3). 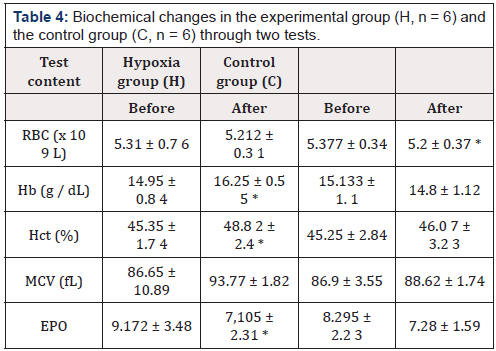 The study showed that the effectiveness of the program with 3 sessions per week and 90 minutes in 6 weeks of training changed body mass, body composition, physiological biochemical of athletes, especially the effect of exposure to the presumptive 2500m elevation environment, increase VO2max, increase the aerobic activity of athlete. Although after 6 weeks of RBC exercise does not increase, but Hb and Hct increase, improve blood regeneration, oxygen is bound to hemoglobin (Hb) increase, EPO stimulates red blood cells to respond to deficiency state oxygen, this leads to better blood oxygen transport capacity for endurance activity.

From research with 6 weeks of short-term hypothetical environmental exposure, increased oxygen intake of the blood will increase the ability of oxygen to transport the muscles, providing strength foraerobic activity to be better. Improved durability performance was demonstrated through a test run of 3000m, decrease 7.38% time, HRmin decrease -13.1%, but VO2max increase 7.9%. This study is consistent with [10] studied on highintensity cyclist (100% - 90% peak power) for 7 weeks at 3000 m simulated height and VO2max ability of the pretest team it is better than grouping near sea level. [11] showing the effect of 5 weeks of training in a 2500m elevated presumptive environment, improved aerobic performance compared with exercise near sea level, modified but not this is consistent with the findings of the study, which is consistent with [11], as RBC did not increase after 6 weeks of training. This study is also consistent with the study by [4], which is stimulated by the Erythropoietin (EPO) hormone. [12] As EPO plays an important role in stimulating red blood cell production, EPO is mainly synthesized by the pertibular fibroblasts of the renal cortex and liver, like a reaction resistant hypoxic state [4,13]. The most important finding of this work states that a 6-weekly intermittent hypoxic training protocol with high intensity intervals (3 x 3 group x 5min bouts at 90% of VO2max-hyp) is an effective training means for improving aerobic capacity at sea level.